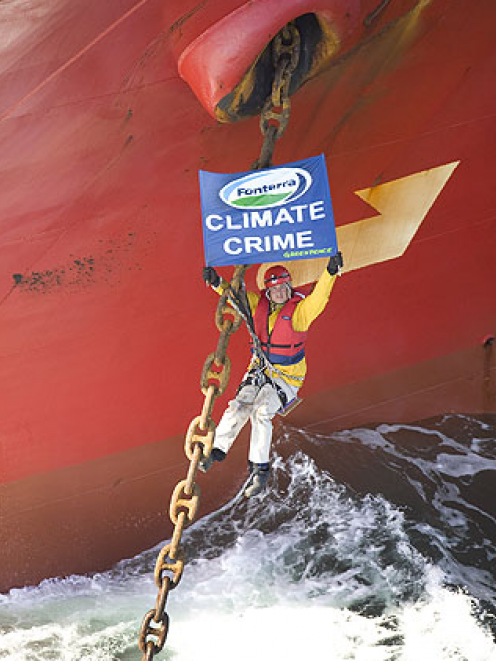 They were among 14 Greenpeace members who boarded the ship from a small boat this morning while the vessel was anchored and waiting to berth.

Two of the protesters were earlier collared and arrested on the ship, plus another on the boarding craft.

That left 12 on the ship, a number that's been cut to seven with the five taken down from the East Ambition's cranes tonight.

Tauranga police area commander Inspector Mike Clement said in a statement police used a crane and cage and were raised to the height of four storeys to cut the cables that tied the protesters to the ship's steel cables extending from its cranes.

The protesters had been charged with illegally boarding a vessel.

"Even though the ship is no longer at sea, we are still dealing with significant height considerations and we will take as long as we need to ensure the safety of emergency personnel and protesters alike," Mr Clement said.

Greenpeace boarded the ship to protest against its cargo of palm kernel (PKE) which is used in New Zealand as stock food on dairy farms.

The environmental lobby group says it took action because of what it claimed was the role of PKE in the destruction of rainforests, predominantly in Malaysia and Indonesia.

It said forests were being cleared for the planting of the trees that produce palm oil.

PKE is a by-product of the palm oil process.

Police worked with New Zealand Fire Service personnel and private contractors to get the five protesters down tonight.

Mr Clement said he was keen for the situation to be resolved as soon as possible but the safety of everyone involved was the paramount concern.

He earlier described the protesters' behaviour as "irresponsible".

"I fully respect the freedom of Greenpeace to protest legally but they have crossed the line by interfering with legal commerce and free navigation on the high seas," said Federated Farmers president Don Nicolson.

He described the protest as "economic treason".

He claimed Greenpeace was anti-farming: "It's a despicable new tactic that has Greenpeace's loathing of farming written all over that ship."