Gun law change: We are the voice for victims, says PM 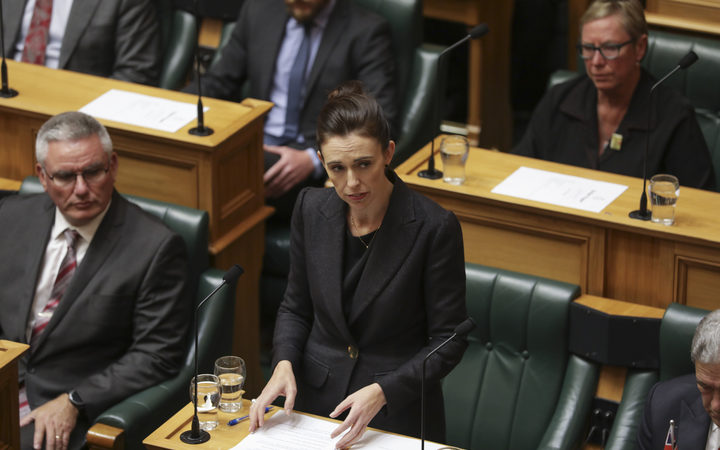 Senior police officers and members of Mr Nash's staff were among the few people in the public gallery to witness the vote on the Arms (Prohibited Firearms, Magazines, and Parts) Amendment Bill, which outlaws military-style semi-automatics, magazines and parts that can be used to assemble prohibited firearms.

The bill, prompted by the massacre of 50 people in two Christchurch mosques on March 15 this year using semi-automatic weapons and high-capacity magazines, was passed by 119 votes to one, just over a week after it was introduced.

The legislation is expected to be approved by the Governor-General today.

The Prime Minister began the debate over the final reading of the bill by telling MPs their vote would make the country safer.

She told them that by voting near-unanimously in favour of the bill they were doing the right thing for the victims of the 15 March massacre.

"We are ultimately here because 50 people died and they do not have a voice. We in this House are their voice, and today Mr Speaker, we have used that voice wisely," Ms Ardern said.

Labour MP and Chair of the Finance and Expenditure Committee, Michael Wood chaired the select committee that considered the Arms Amendment Bill.

He acknowledged the gun owners who would be affected by the change in law but told Parliament it had to balance the competing rights of citizens.

"Every time we legislate in this house, we balance the rights of different citizens and different groups within our communities and on this occasion we say that the right of all New Zealanders to live peacefully and free from the terror that inflicted our country on the 15th of March is a more important right than the right to own these weapons."

"New Zealand will be a safer place once this is implemented and once we get these guns out of our communities," Mr Nash said.

He said it wasn't going to happen overnight, but that this was a start.

Those who own illegal firearms were given an amnesty until 30 September to hand over the weapons to police.

Mr Nash said if anyone is found to be in possession of one of the illegal firearms after that date they could face up to five years in jail.

"I like to think the vast majority of Kiwis are good law-abiding citizens and both the prime minister and myself have made this very clear that we're not penalising these gun owners, but we have changed the law and as a consequence of that they are now holding something which is illegal."

Mr Nash said there are a number of ways to check that illegal firearms are being handed in, including checking gun dealers' records.

"Gun dealers have to hold five years worth of data. We can take a look at their records and we can determine where guns have been sold, who they've been sold to and we can follow through on that."

He said they all military-style semi-automatic weapon had to be registered and he can go through those to make sure they're all handed in.

Last night several MPs noted that Parliament had failed to pass tougher gun laws in the past.

Mark Patterson from New Zealand First said police and others had repeatedly tried to restrict semi-automatic rifles before and previous parliaments had failed to agree to gun law changes.

"This is not the time to point fingers but certainly for anyone who questions the process, how much process do you need? We have been too timid, we have paid the price," Mr Patterson said.

Judith Collins from the National Party said she was proud of Parliament and the legislation would have a lasting effect on New Zealand society.

"This is one of the most important pieces of legislation we will pass this Parliament because it's not only about keeping people safe, it's about putting a marker in the sand for our New Zealand culture."

National's Andrew Bailey said the bill was a moment for Parliament to act in unity and he hoped it would send the right message to the families of the 50 victims.

"To the families of our missing 50 and those who were injured, I trust you will look at us as an institution and say we delivered here today."

Green Party MP Golriz Ghahraman said Parliament must pass the bill because communities directly affected by the attacks such as Christchurch people and Muslim and refugee groups were afraid of further violence.

"We live not only with ongoing grief but also with very real fear," she said.

"As we walk our kids to school, as we catch a bus late at night, as we gather in our community hubs, we now live with the fear of mass violence and this house recognises that and the job of making New Zealand safe."

The only dissenting voice was ACT's David Seymour who said rushing the bill through Parliament was political theatre.

"I am in support of changing our gun laws, but it is impossible for anyone of good conscience to support this bill, the way it's been brought about and the problems with it that will make our society more dangerous than we had on 15 March," he said.

The political mileage made out of the Christchurch massacre disgusts me.

Our exceptionally well-paid politicians and secret services failed in their most fundamental of duties. Heads should roll. Instead we get the spin doctors. We see photo opportunities, debating skills, dramatic skills, and the launching of careers from the beehive to the international stage.

The public wants blood. Our politicians make sure it is not theirs. Witches are needed. A minority group to hate. Law abiding firearms owners are branded by government PR as “The Gun Lobby”. Immediate action taken. Just like Salem in 1692.

Has the political grandstanding helped? It has done nothing about the guns in the hands of criminals. $200,000,000 committed. But how can you put a value on a politician’s CV?

Also this week, frontline police removed six illegal guns from one of the gangs. That has saved lives and made society a safer place. Personally I would like to see more budget in the hands of the police and less with politicians.