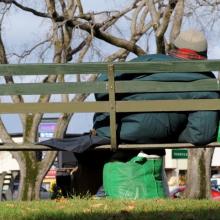 Getting them off the streets and into secure housing could cost as little as $15,000, a University of Otago housing research organisation said.

An inquiry into homelessness lead by the Labour, Green and Maori parties is hearing submissions in Wellington today.

He Kainga Oranga deputy programme director Nevil Pierse told the inquiry that there was a moral case to end rough sleeping. But there was also a strong economic case, he said.

His organisation's ``best estimate'' was that it cost the Government $65,000 ``to keep somebody homeless''. These costs were mostly incurred in mental health services and the police costs of addressing both offending by and against homeless people.

Pierse said other countries which had invested in the Housing First approach had found a net economic gain in getting people off the streets.

``In Canada ... they were able to show that there were actual benefits. Ninety-six per cent of the money for rough sleepers they were actually getting back.''

This figure did not take into account the benefits of a potential increase in tax take and higher employment.

Social Housing Minister Paula Bennett confirmed in July that $3 million would be invested in the Housing First model which is based on the idea that people should be placed in housing before any other issues such as addiction or mental health are addressed.

Pierse welcomed the commitment, but said that level of investment was equivalent to around $750 for each homeless person in New Zealand per year. In Canada, where Housing First originated, $110m was invested in the programme a year - around $15,000 per person.

But the sector needed certainty about long-term funding before it committed to increasing capacity.

The committee also heard from people who had lived on the streets or in cars.

Sarah, a solo mother of five children from Lower Hutt - who asked that her full name not be published for safety reasons - said her family had lived in a car, in a single bedroom in a rental property, and in substandard housing that made her children sick. One of her children had nearly died after getting pneumonia, she said.

She said that she married while young and had spent years trying to escape her abusive partner. A long legal fight to secure a protection order against him had left her in debt.

She had struggled to get help from Government agencies, though she was now on the wait-list for a state house after a long fight with Housing New Zealand.

``At times going to WINZ I've found they can be really horrible,'' she said. ``I've had case managers who have treated me as less than human.''

Sarah said the private rental market was unreliable for homeless or vulnerable people.

In one instance, a landlord had kicked her out and had refused to return the bond, alleging property damage. When she attempted to lay a complaint with the Tenancy Tribunal, she was told this was not possible because the bond had never been lodged.

``We have really just been at the mercy of other people a lot,'' she said.

UNICEF's Prudence Stone said central and local government agencies, courts, and the tenancy tribunal had all failed to help Sarah.

Non-government organisations had to fill the gap, she said, but were not funded enough to cover all rough sleepers.

``When our agencies fail, people like Sarah are left fending for themselves in the open marketplace,'' she said.