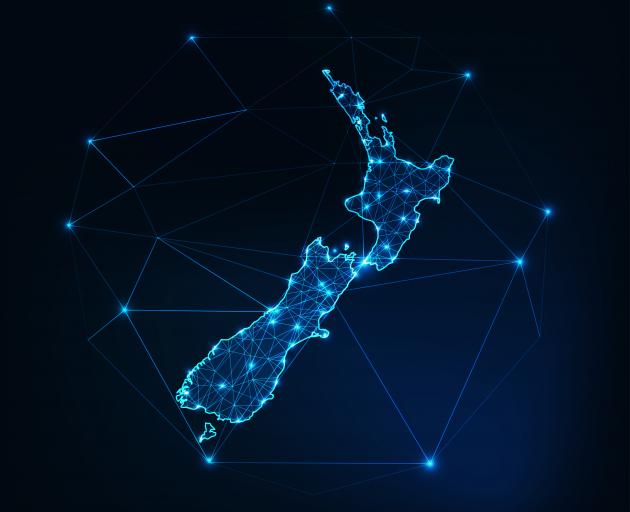 The Ministry of Health's contact tracers – capable of tracking down thousands of people in a day – were expected to be able to quickly pin down the 320 people considered as close contacts. Photo: Getty Images
The border blunder that allowed two women who travelled from the UK with Covid-19 out into New Zealand has prompted contacted tracers to take extra precautions, by casting the net much more widely than they otherwise might have.

With no other current cases in New Zealand for them to deal with, it's also expected the Ministry of Health's contact tracers – capable of tracking down thousands of people in a day – would quickly be able to pin down those 320 people considered as close contacts.

Director general of health Dr Ashley Bloomfield said yesterday that he expected most to be traced by the end of the day.

The Ministry of Health considered a "close contact" as anyone with who may have been exposed to someone either suspected, probable or confirmed to have Covid-19 while they were infectious.

Normally, that included anyone who happened be sitting within 2m of the infected person, or who had face-to-face contact with them, for 15 minutes or longer.

But in the latest case, the ministry was treating anyone who was on the same flight to New Zealand as the pair - or who were staying in the same Auckland hotel during their shortened isolation period – as close contacts, explaining why such a large number had to be traced.

Otago University epidemiologist Professor Michael Baker said the Government had cast its net much wider than it might have during the thick of New Zealand's response, back in March and April.

"Normally, there wouldn't be that many people considered as relatively close contacts." 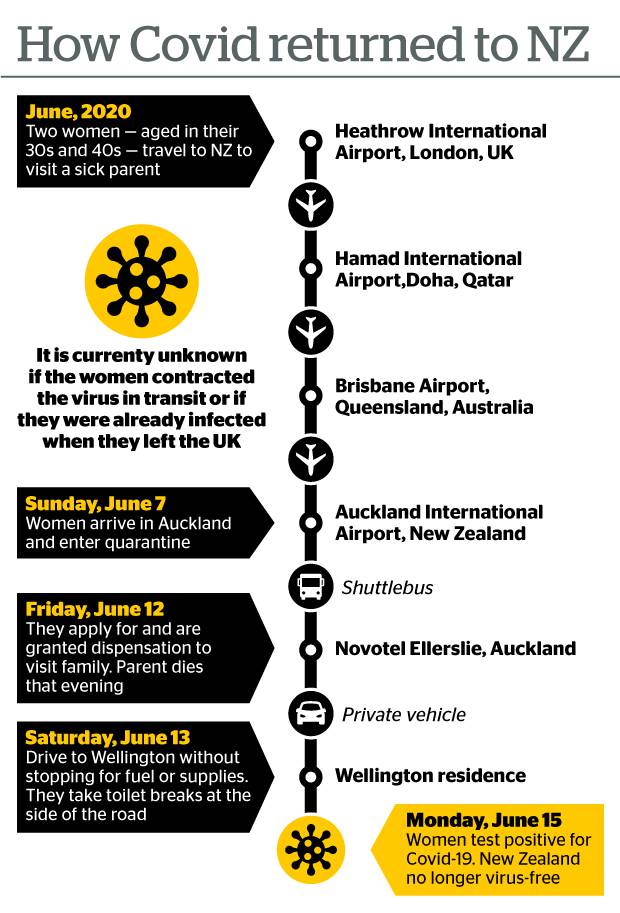 NZ Herald graphic
For instance, when tracers targeted those who'd been on the same flight as an infected person, they typically targeted those sitting within two rows back and forward, rather than all passengers on the plane.

Bloomfield said all of those traced were being tested and isolated until a negative result came back.

While it wasn't clear whether anyone else had been infected, no new cases were reported today.

The women met with two friends, who had provided the car, and the foursome exchanged hugs and kisses, it was alleged yesterday.

"As part of this the pair were in limited physical contact with the two friends for approximately five minutes," a statement from the ministry last night said.

One of the two who met the women to give directions would later attend a gym class, before she knew that the two women had tested positive.

The two people have been tested for Covid-19 and were in self-isolation.

The New Zealand friends have made contactless deliveries of food or care packages to the women while they have been in self-isolation in recent days, the ministry said.

"These packages were contactless deliveries and the friends who have delivered the packages have taken all appropriate precautions to maintain physical distance. As such there is no risk to the community from these interactions."

The ministry said it was important to remember that the two women were distressed at the time by the sudden death of their family member.

Yesterday Michael Woodhouse told Parliament that the pair had hugged and kissed someone on their travels, but this morning Bloomfield clarified that that was not the case.

"There was a fleeting interaction. We wouldn't even usually consider a close contact ... they were not hugs and kisses. There was a very fleeting arm put around the women to provide comfort," he reiterated.

"This was so fleeting that actually, the women themselves who were very distressed did not recall that happening," he said, adding that it was listed in through the interview.

One family member was now isolating with the two women, who were being monitored daily by the local public health unit, he said, while the ministry was managing the wider tracing from the National Contact Tracing unit.

New Zealand's contact tracing system has come under criticism throughout the pandemic – and was beefed up following an urgent audit by infectious diseases specialist Dr Ayesha Verrall.

After picking up most her recommendations, the ministry now had capacity to trace around 5000 contacts a day, with its national tracing centre doing call centre work to back up public health units.

The ministry's most recent data, covering April 13 to May 29 – a period in which New Zealand was in alert levels 4 and 3 – however found it was only hitting one of its three targets.

Off 144 cases and 360 close contacts, 71 per cent of people were being tested within 48 hours of their first symptom, below the target of 80 per cent, while 79 per cent of test results had been returned within 24 hours of a swab, just shy of the 80 per cent target.

About 83 per cent of close targets were however isolated within 48 hours of the person they'd been exposed to receiving a positive lab result, just over the 80 per cent mark.

Those numbers are more or less the same as the previous data set - though there was a notable improvement in how quickly test results are being returned.

Meanwhile, around 562,000 people have signed up to the NZ COVID Tracer app – about 4000 more than yesterday.

"We continue to encourage as many people as possible to download and use the app – this will support our contact tracing efforts in level 1," Bloomfield said.

"It's great news that more and more businesses and organisations are displaying their official QR codes."