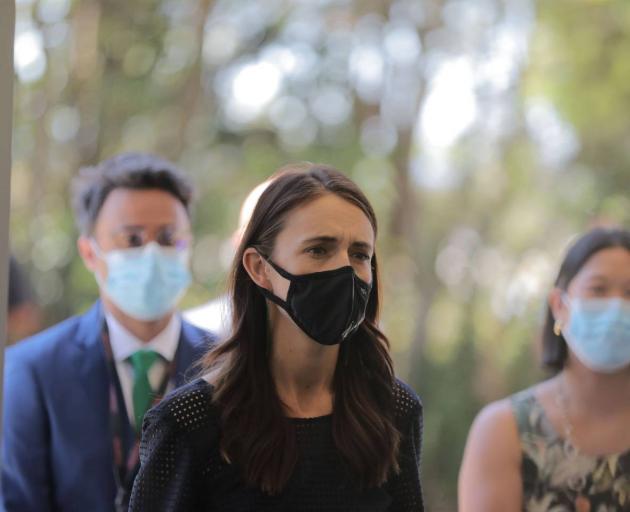 Four million Kiwis had now been vaccinated against Covid, which was a "fantastic result" but getting a third booster shot was critical.

Speaking at the Tamaiti Whāngai Covid Vaccination Centre in Lower Hutt, she said her message today was that the booster was incredibly important.

"I implore you - please get a booster."

Ardern said that although Omicron could be a milder illness for some people, the Government was expecting many more cases and that would put pressure on the health system.

She said there had been a range of modelling and the Government had made plans for a wide range of situations from high numbers of cases to low cases.

Ardern said the different models have a "vast variation" and she has asked experts to try to compare them and come up with a more consistent analysis.

This was partly because of the new nature of Omicron, with WHO only declaring it a variant of concern eight weeks ago.

But no matter the modelling, she said that every booster shot in a Kiwi arm will help reduce the impact of Omicron on the community.

When asked if she could guarantee the New Zealand intensive care system could cope with Omicron, Ardern said that looking overseas every country's health system had been put under pressure by the variant.

The IHME projections also predicted an outbreak in New Zealand could last about three months, with death rates projected to total more than 400 by May 1. Daily fatalities are predicted to spike at about 10 through mid-March.

But the best thing Kiwis could do was get their booster shot, regardless of the modelling, she said.

She said the Government recommended people get booster shots four months after having their second Covid vaccination shot.

That was based on advice from health experts and clinicians.

She also rejected claims the Government had requisitioned rapid antigen tests (RATS) from those ordered by private businesses.

She said RATS have a large variation in accuracy rates - some as low as 30 per cent.

It was important the Government ensured that quality RATS were brought in.

When asked when ordinary Kiwis would be able to buy RATS from their local pharmacy so they can test for Covid, Ardern said the Government was focused on ensuring every Kiwi could be tested.

The Government's three-phase Omicron plan would initially focus on providing traditional PCR tests and then moving to RATS as more are available.