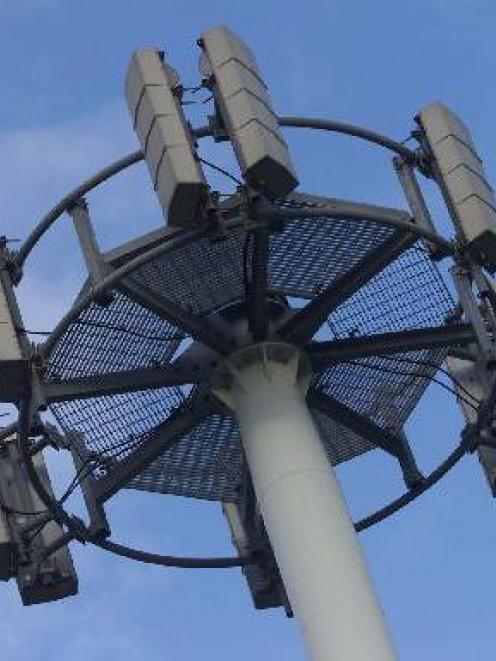 Photo: More than 170 cellphone towers were affected by yesterday's storm. Photo: NZ Herald
Spark says coverage is almost fully restored to thousands of customers in the South Island after floods caused a widespread outage last night and cut the main route from Christchurch to Dunedin.

Severe thunderstorm warnings have been issued for large parts of the country. Meteorologist Andy Best said the top of the South Island, the Wellington region and the Kapiti region up to Taranaki could expect more bad weather.

A Spark spokeswoman said the outage was "major" and technicians were working to fix the problem. Some 174 cell towers had been affected.

Emergency 111 calls were switched to Vodafone towers. Technicians were on site at both locations of the fibre cuts and were testing replacement fibre cables on Sunday.

Many customers in the Dunedin area have reported having their access restored.

In a statement posted on Facebook late on Sunday morning, Spark said almost all of the impacted South Island broadband, mobile and landline services have now been restored. This had been achieved by a work-around using spare fibre strands and additional cables.

"Unfortunately, due to extreme weather conditions resulting in flooding and slips in the area, both damaged fibre sites are still inaccessible and the timeline to restore these will depend on accessibility."

However, Spark said services were "still vulnerable, as they are reliant on a damaged cable, which could be affected by moving weather conditions. Our team will continue to monitor the situation and share further updates as soon as possible."

The flooding has caused road closures throughout the South.

The Timaru District Council on Sunday confirmed that the State Highway 1 bridge at Rangitata would remain closed until Monday, cutting access between Dunedin and Christchurch.

The alternative route over the bridge at Arundel in Upper Rangitata was also shut.

State Highway 6 on the West Coast remained closed from Hokitika down to Makarora on Sunday, with several slips on the road.

New Zealand Transport Agency system manager Pete Connors said more than 350km of the highway was shut because of the slips and a bridge washout yesterday.

‘‘Until the waters recede, we cannot get in to do the repairs needed. We have crews and machinery ready to reinstate the highway and ensure it is safe for all road users once the flood waters from the river’s tributaries have been contained back into their main flow.”.

However, the Haast Pass (SH6 Haast to Makarora) was open on Sunday on one lane and slip clearing work had begun. The road would close overnight from 4pm, NZTA advised

Meanwhile, power was out from Fox Glacier to Paringa and likely to remain so for a couple of days.

A spokesperson for Westpower said the lines company was working with Civil Defence and roading authorities to find out when they could get in to replace downed power poles.

The atmosphere over Aotearoa remains unstable for much of today, as this image indicates.
There are still Severe Warnings and Watches in force for heavy rain and thunderstorms over many areas of the country, and all the details can be found at https://t.co/qHyE5zhh6X. ^AB pic.twitter.com/TwzEe0ojli

BAD WEATHER NOT OVER YET

The slow-moving front responsible for the bad weather will stall over central New Zealand, bringing the risk of more heavy rain to parts of the North and South Islands on Sunday.

Heavy rain watches are in place across a large swathe of the central and lower North Island, and parts of Nelson and Marlborough.

A cluster of thunderstorms hit Wellington overnight, sending residents to social media to share photos and video of the impressive light show.

For all of the North Island apart from Gisborne and Hawkes Bay, scattered showers are expected along with some heavy with thunderstorms, hail and possible downpours.

In Gisborne and Hawkes Bay, the situation will also be grim with rain about the ranges, possibly heavy and thundery. And scattered showers should start spreading east of the Hawkes Bay ranges from the afternoon.

Aucklanders can expect to isolated showers, more widespread from midday with thunderstorms and possible downpours. Then, there will be northwesterlies - strong in exposed places - from afternoon.

But a cool change on Monday, and especially Tuesday, would start to turn the tap off.

"The whole country's going to be [experiencing temperatures] below average on Monday as the southerlies start to push across the country, " a MetService spokesman said.

"Tuesday's looking pretty good for most of the country as finally we get rid of the northwesterlies."