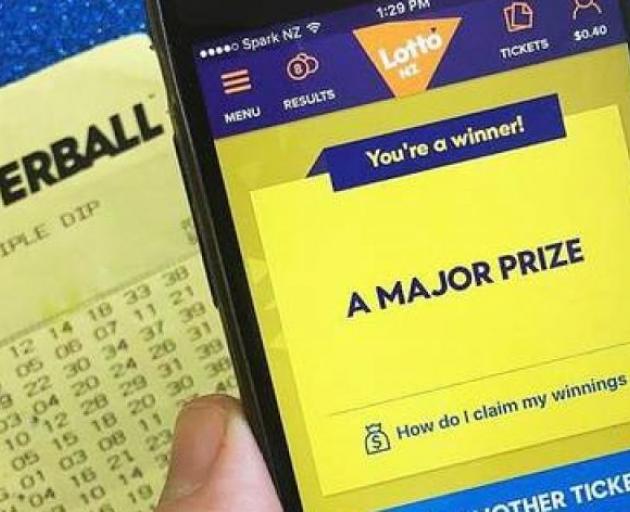 The $42.2m pool is the second largest win in Lotto history. Photo: Supplied
The winner of the $42.1million Lotto Powerball has claimed their winnings.

They are a local family who only realised Powerball had been struck yesterday morning when they read the news.

"This prize is going to make a real difference both to our family and those in our community," the winners said in a statement today.

A female member of the family said her first thought was "good on them" when she heard in the news that the $42m prize had been won.

"I always think that when I see an article about someone winning.

"But I really didn't think much of it until I saw the winning ticket was sold at Countdown Pōkeno.

"I genuinely never imagined I'd have the winning ticket, but the article was enough to make me fish my wallet out of my bag and check my ticket."

The woman then checked the results on MyLotto.

"I don't know why, but that one line of my ticket stood out to me from the moment I started checking – I barely even looked at the other lines, the winning numbers almost seemed to jump out at me," she said.

"I didn't know what to do next, I was sure I must be making some sort of mistake! I always imagined whooping and cheering if I won, but I have never been so calm in my life. I popped the ticket back in my wallet and waited for my husband to come inside from the garden."

When her husband arrived she jumped up to tell him they were now multimillionaires.

"I'd barely stepped inside when she raced over and blurted out 'we've just won $42 million with Powerball' – it took a second or two to get my head around what she had said," he said.

"My wife handed me the ticket and asked me to check it as well, just to make sure. I checked it, then checked it again – and again! But no matter how many times I checked the ticket I kept getting the same thing – all six numbers and the Powerball on the one line. I couldn't believe what I was seeing."

The family say the $42m windfall means they are now planning for their future.

"Even now, it feels unreal – it's a lot to get our heads around. We feel incredibly lucky and want to take some time to really think things through and make sure we have a good plan in place to set our family up for the future," said the woman.

Yesterday Jatinder Chahal, manager of Countdown Pokeno where the lucky ticket was bought, said there was now a real buzz around the area, with staff also wondering if it was them who sold the ticket.

The supermarket team was "walking on air" after playing a part in one of New Zealand's biggest ever Lotto wins.

"We're not sure yet what team member sold the winning ticket, but everyone wants to be that lucky person - maybe they're hoping the luck will rub off!

"There's a real buzz in the Pokeno community - lots of our customers have been congratulating the team and everyone is in high spirits.

"It's the first big Lotto win our store has had since opening in February - up to now it's been a few thousands of dollars that have been won - which is still good, but not as good as $42 million I'm guessing!"

That buzz of excitement was so intense around the country on Wednesday night it brought Lotto's website and app to its knees, causing hours-long delays for people wanting to see if they had struck it big.

The $42.2m pool is the second largest win in Lotto history.

Pokeno residents have been trying to figure out whether the winner is a local or someone from out of town.

Helen Clotworthy, owner of Pokeno Bacon, believed it was more likely going to be a local given the strict border and alert level restrictions.

She'd even noticed it with her trade, there'd been fewer out of towners popping in.

"It's isn't me," she said when answering the Herald's call.

"It's a bit of excitement for us all.

"We think it's somebody local because we are right on the border and no though traffic coming through now so for us, we've noticed it with our trade dramatically as people going home used to swing in.

"We're not getting that customer because they're probably most likely on the other side of the border, so there's a pretty strong feeling it's somebody local."

Clotworthy said her friends knew that if she'd won it, they would never know, it would be something she'd keep close to her chest.

"I've said it all my life you'd never know if I won lotto because I'm never going to tell anyone, which I'm not," which had since led to a ribbing from friends.

As for what they did with it, she said it was their own business.

"The pressure that they're going to come under now sometimes you wonder on one hand it's fabulous but on the other it just produces a lot of grief."

Thousands of Kiwis were left frustrated after not being able to get on to the website to check their tickets on Wednesday night.