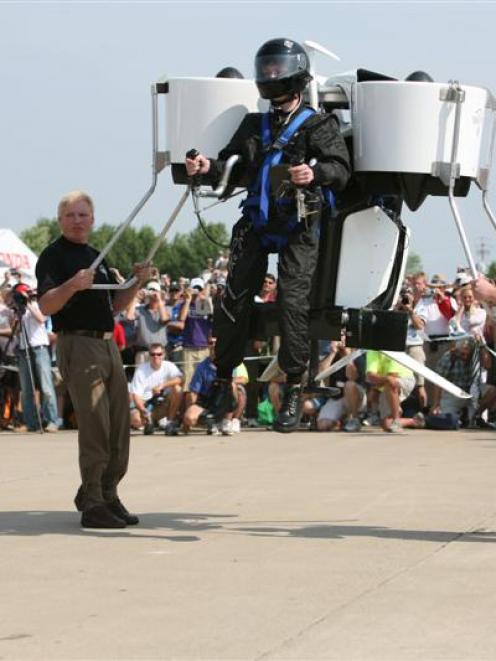 In his garage he was building a personal flying machine - a jet pack.

It began in 1981, on a late night walk back from the Cook Hotel to a flat at the corner of Howe and Castle Sts.

A bunch of young students, including Mr Martin, got to talking about a better means of transport than walking.

The next day, Mr Martin, who had always had a fascination with jet packs, went to the University of Otago's science library and began researching how to build one.

Inside a ring of spectators, and in front of American television cameras, the Dunedin boy's dream lifted off the ground and, rather gingerly, hovered and then set down again.

Mr Martin's oldest son, Harrison was at the controls.

Speaking to the Otago Daily Times last week, Mr Martin explained why he had kept his secret - even from his family - for so long.

Partly it was to do with patents and the fact that they last for only 20 years.

"I knew it was going to take a long time. Secondly, I'd been brought up pretty much that you don't skite."

Mr Martin's early life revolved around completing "projects" with his electrician father, the late Neil Martin, in the garage of the family's Wakari home.

One project consisted of building fibreglass kayaks for Dunedin schools.

"Our way was to go out to the garage and do a project and when it was finished you would show people - 'hey, look! This is what I made'."

Mr Martin suggests the Wright Brothers took exactly the same approach in the lead up to their famous first, public, powered flight at Kitty Hawk on December 17, 1903.

"What people don't know is that there had been over 3500 flights before that day and they had been doing it for about eight years. That was about their ninth aircraft and their story is very similar to us."

Mr Martin's first steps towards building a jet pack were all on paper.

For four years, while living in his rickety, two-storey student flat, he worked on equations.

At the same time, he picked up a double major in biochemistry and physiology that led him into a pharmaceutical sales job in Christchurch, which provided him with both an income and business experience.

"I found out that most inventors fall over in the business side of things.

In a garage, in a rented flat in Christchurch, practical testing of his theories began.

"I started off with a Honda lawnmower motor and a couple of Xpelair fans and then sort of built up from there."

A lot of test rigs were small, scale models he ran on his bench, to prove his equations were right.

"And, quite often, they weren't and we had to tweak the equations to find out why. There's lots of research in getting it right.

"Then once you've got a set of equations that are actually accurate, and scalable, then you can start building something that's reasonably decent.

Mr Martin's first jet pack had a 22hp engine which was not powerful enough to lift anyone off the ground.

"But I strapped it to a hang glider and used to go flying around the countryside with this jet-propelled hang glider trying to keep out of people's way so they couldn't see what I was doing."

The testing of prototypes had caused a "few frights" and a few "intense moments" when things broke and went "flying in all directions".

And eventually, most of his prototypes ended up at the tip.

"I'd build it, test it to destruction, learn as much as I could from it and then hit it with an axe - so it was unrecognisable - and take it to the tip."

Practical engineering is a part of Mr Martin's genome.

His ancestors, "the McKenzie boys", arrived at Tokomairiro, from Edinburgh, in 1846 and their names are still inscribed on the portals of three rail tunnels north of Dunedin that they helped to build.

His grandfather, Daniel McKenzie, was an electrician and part of the small group of people who started New Zealand's first radio station, at Otago University.

His father was head electrician at the university and Mr Martin had summer holiday jobs there "from the age of about 7".

Mr Martin confirms the story that as a 3-year-old, while reassembling the vacuum cleaner, he "blew the Wakari substation".

"Other people have said I've got amazing skills to screw things up in a big way."

He credits his drive to succeed to his upbringing by parents who had been through the Great Depression and the war years.

"They were very focused on making sure that their children - being a good Scots Dunedin family - got a very good education, while making sure we had a roof over our heads and food on the table.

"My mother was a nurse. My father was an electrician. But they also did extra stuff over and above that.

"They ran a newspaper route for many years around the Wakari district. My dad would get up at 4.30 in the morning and go and deliver the ODT.

"You didn't spend money. You tried to earn money."

Mr Martin attended the Wakari Primary School and Balmacewan Intermediate and was an early student at Kaikorai Valley High School, where he took sewing and cooking rather than metalwork and woodwork.

"There were only two people who did it, me and Stephen Tubbs, but with a dastardly ulterior motive. That's whereall the girls were."

Mr Martin describes his jet pack design as a paradigm shift from the Bell Rocket Belt seen in the 1965 James Bond movie Thunderball.

"I saw it on Lost In Space and I researched it when I was 5 and I knew that it will never fly longer than maybe 35 seconds maximum."

Mr Martin says the Martin Jet Pack could fly 50km and potentially reach an altitude of more than 2000m, but safety and aviation rules were limiting his operations at the moment.

He will not allow anyone to fly his machine more than two metres off the ground until a prototype has completed 100 hours safely.

"It's a bit like learning to swim. You can learn to swim in a nice shallow pool where you can put your feet down if things go wrong.

Aviation rules, for ultralights, restrict the machine's weight to 115kg, its fuel tank to 19.8 litres and its speed to 100kmh.

"We could fly faster than that. We could put more petrol in it. We could make a thing that would lift more and fly faster . . . but we've always got to keep under those legal limits, otherwise we're not allowed to sell it."

Mr Martin believes, eventually, they would build bigger models for military use and smaller ones for recreational use and he draws parallels with the ever expanding range of jet-skis.

Mr Martin's mother, Heather, still lives in Dunedin, his sisters Anne and Kiri have moved to Australia and his father died last year.

Asked if his father had seen the jet pack flying, Mr Martin said: "I think he was a bit blown away."

Mr Martin says he wants to display the jet pack in a travelling roadshow - possibly in the first half of next year.

"I think I owe that to the country. I got educated by the taxpayers of New Zealand. I got, in my day at Otago University. . . $17 a week.

"So I had my life pretty well sorted, thank you very much to the taxpayer.

"I'd like to do a travelling road show, go to Invercargill and demonstrate the thing.

"Obviously, I've got to come to Dunedin. It's my home town."

"I can see no reason why we can't create a huge business in New Zealand, a multibillion-dollar industry."

He points to Nokia which still has its mobile phone headquarters where it began in Sweden and snowmobiles, that are still manufactured in the Canadian town where they were first invented.

"I can't see any reason why we can't do the same. Let's keep production and research and development in New Zealand. I want to be the opposite of the brain drain and keep people here."

He is expecting a visit from top aerospace companies next year.

"If you do it and do it well, the Americans will come here."