Jones left to dwell on future 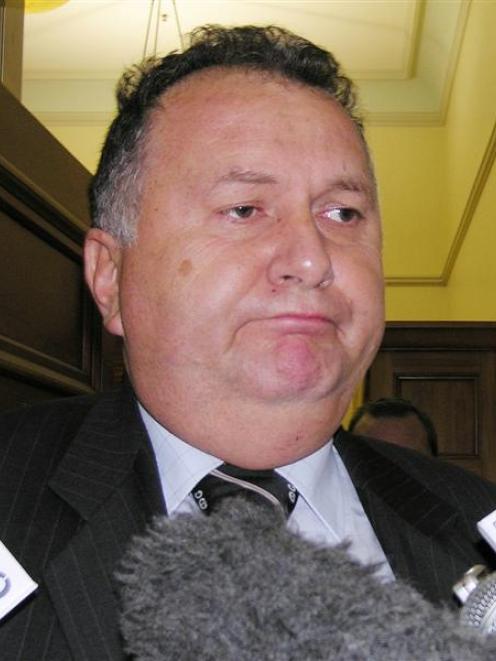 By the end of the day, after admitting it, even he was questioning his future in politics.

"The reality is it damages my credibility."

Asked what the public would think of him, he said: "They will say that Shane has dug a hole for himself and that hole may very well prove to be his grave.

"Whether it's fatally injured me as a politician, I'll dwell upon that... I don't make those decisions in the heat of humiliation."

The former building and construction minister is facing certain demotion in Labour's caucus and demotion from his safe list place of 16 - if he survives the political and personal crisis.

He said his wife, Ngareta, found out only yesterday morning when he phoned her, that he had watched "blue movies".

"Not surprisingly, this has injured her. She's enraged."

Acting Labour leader Annette King said she would make no judgement on what Mr Jones or other New Zealanders did in the privacy of their own rooms.

But through his ministerial spending he had "let himself down and the taxpayers down".

"What he has to do now is put his head down and bottom up and rebuild his reputation."

Early yesterday, Mr Jones said he could not remember if the films he watched were pornographic.

Reporters then contacted hotels he had stayed in and found out that the price of the adult movies matched his statements and general ones were cheaper.

The confessions then came thickly.

"I lost the plot. Although I paid the money back, there is no honour whatsoever in what I ended up being a part of.

"I offer no excuse. It's a day of extreme shame."

He will face his caucus colleagues next Tuesday, including an array of staunchly anti-pornography feminists.

The agreement ministers sign when they get credit cards says the card-holder shall not use the card for personal expenses, except in an emergency.

Prime Minister John Key this year accepted the resignation of Housing Minister Phil Heatley after questionable spending was revealed - but reinstated him following an audit.

Labour leader Phil Goff, who is in China, was highly critical of Mr Heatley at the time and was opposed to him getting reinstated as soon as he did.

Mr Key said Mr Goff needed to remember his stance and apply the same standards to his own MPs.

Mr Jones is one of several ministers who used their ministerial credit card for personal spending, most of which has been repaid.

That became evident when boxes of credit-card spending were released for Labour's last five years in Government, as well as National's.

Progressive leader Jim Anderton and his wife, Carole, had massages at a hotel in Kuala Lumpur.

Labour MP Chris Carter had two massages in Phnom Penh. He also ordered flowers for his partner on his birthday.

One of the biggest personal spenders was Associate Treaty Negotiations Minister Mita Ririnui, who bought golf clubs and clothing in Perth on January 4, 2007, when most ministers were on holiday.

He said it was the only credit card he had on him. He also spent $900 in a Tauranga bike shop. Both payments were later reimbursed.

Alcohol is allowed to be bought, so long as it is associated with the minister's official duties.

Trade Minister Tim Groser notched up some hefty restaurant and bar expenses on his trips to Apec in Peru in 2008 and the Copenhagen conference on climate change last December.

But Mr Groser says they included hospitality costs, where he paid for others, and the Copenhagen expenses amounted to two drinks a day.

Former Labour consumer affairs minister Judith Tizard paid $155 for a bottle of Bollinger Brut champagne at CinCin in Auckland at a dinner for five, including an "Australian consumer woman" after hosting a transtasman consumer conference.