Muslim community members have hailed mass murderer Brenton Tarrant's life sentence without parole with a mixture of relief, vindication and a 'kia kaha' shoutout of thanks to their fellow New Zealanders.

Temel Atacocugu, who was shot nine times at the Al Noor Mosque, said a big weight had come off his shoulders now that Tarrant had received his sentence from Justice Mander.

"We are sacred, and our community is sacred and our country is sacred, so kia kaha New Zealand."

Now, he was looking forward to the future.

"It's going to be new beginnings start now and then our future are more bright for our Muslim community ... we can't do this without the New Zealand people too."

Asked for his reaction knowing that Tarrant would never be free, Atacocugu said it meant they were now free to live their lives.

"It's big breathing afterwards and more independence for us to freely walk in the sunshine and that's what we're going to do."

Justice "has happened today", he said, when asked about the life sentence.

"Speechless feeling, I can't exactly say in words what I was feeling but it's a big relief after all those long hours of waiting and he gets what he deserved. Justice has happened today."

Immediately after the sentencing, hundreds of people were singing and clapping outside the High Court in Christchurch and signing the national anthem to show their support for the Muslim community.

"But Justice [Mander] didn't let him use the court as a platform. I'm really happy with the result. Our New Zealand system hasn't failed us."

Before giving his victim impact statement, he was nervous.

But when he got inside the courtroom he saw that Tarrant was "weak, mentally and physically" and felt courageous to say what he wanted.

Hamimah Tuyan, whose husband Zekeriya Tuyan was the last person to die as a result of Tarrant's violent rampage, was relieved the "intense" court process is all over.

She found it to be a "cathartic" experience.

Hearing the final sentence of life without parole felt like "an outer body experience", she said.

"I just came out quite dazed. I couldn't believe that what we prayed for, we got. It's a whole lot of relief." 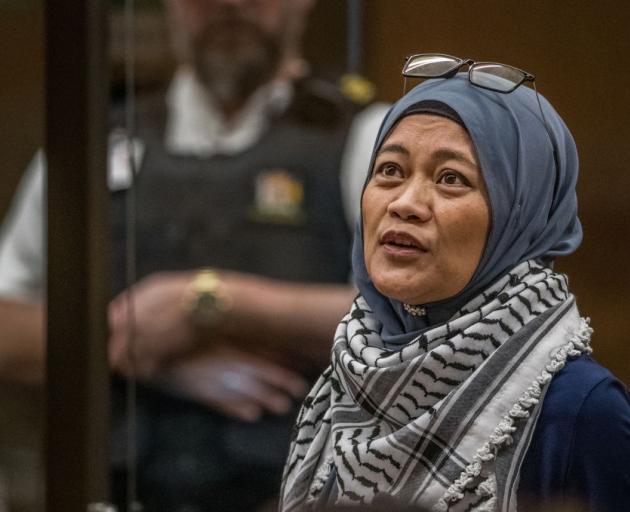 Hamimah Tuyan told the court the mosque terrorist was no different that ISIS. Photo: Pool/Getty Images

Zekeriah Yuyan was the last to die of the injuries he sustained after being shot in the chest at the Al Noor Mosque.

His life was saved that day — but the bullets that ripped through his body caused too much damage for him to survive.

On May 2 — 48 days after the terror attack — the 42-year-old father-of-two died in Christchurch Hospital.

'You can see all New Zealanders here'

Ahmed Yesuf who was shot and wounded at Al Noor also spoke outside where he was buoyed by the level of public support.

"Today is the happiest day," he said.

"You can see all New Zealanders here and many people supporting us and that is what makes us stronger and stronger."

Yesuf vowed to continue to attend his mosque and to pray.

And he feels safer now that the gunman has been jailed for life without parole.

"As the judge says, he is a terrorist… and life without parole is the highest you can get in New Zealand. That's what he deserves."

Janna Ezat whose son Hussein Al-Umari died in the attacks has mixed emotions now that the sentencing is over. 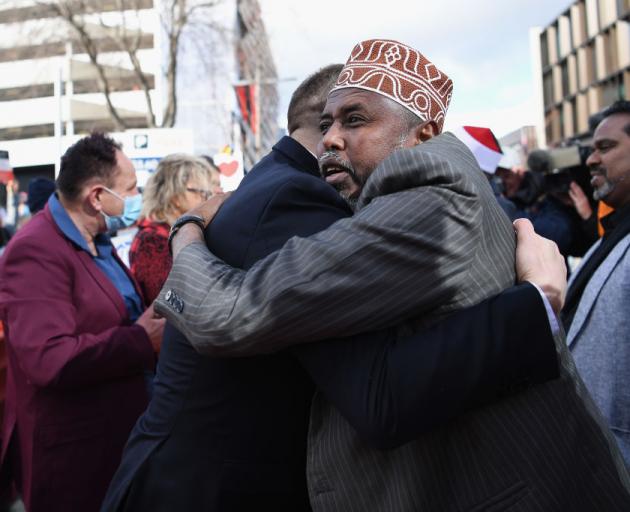 Muslim Association Canterbury President Mohamed Jama celebrates with members of the public outside Christchurch High Court. Photo: Pool/ Getty Images
She feels relief but "paralysed" and is looking forward to going home and relaxing with a cup of tea.

'It was the only sentence that could be given'

Anjum Rahman of The Islamic Women's Council (IWCNZ) said the life sentence was the best outcome for not only the community but for Tarrant himself.

"And I agree totally with the judge's sentiments that given the severity of the crime and it's unprecedented, the wide impact and the amount of suffering and loss, it was the only sentence that could be given."

Knowing that he would now be forever behind bars, "the children, the grandchildren of the people that have been killed and other victims would never be able to be feeling safe if he comes out, but more than that, i don't think he would be safe. but also he himself talked about feeling outside of society and that would only continue if he was out. I think it was the best outcome for him because he would have no life anyway. Now, he's in jail, he'll be housed, he'll be fed, it's the best that he could hope for." 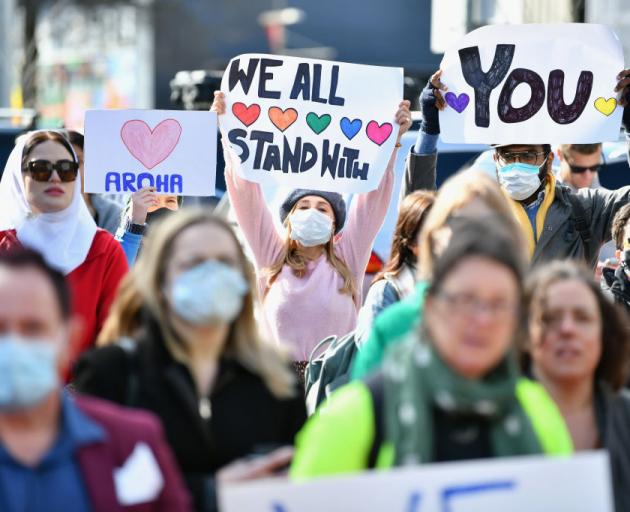 Members of the public wait outside Christchurch High Court as they want to show the victims their support during the sentencing of the Christchurch mosque terrorist. Photo: Pool/Getty Images

Asked her thoughts on whether he should have been deported back to Australia, Rahman said New Zealand was where he committed the crime, so it should be where he served the time.

"Given past experiences of this country sending people back ... we can't be sure that he would get the sentence carried out as it would be here."

She also paid tribute to the victims and their relatives sharing their statements in court and coming face to face with the killer again.

"They have been amazing and so strong and so brave and so willing to open their hearts and souls and to share with the court what their lives have been like as well as to show their determination and drive to make the best of their lives even after this, has just been inspiring."

She said now that the court process was finished they would all feel "huge sense of relief", however their mental and physical recovery would be ongoing.

'It was a crime against New Zealanders'

NZ Muslim Association president Ikhlaq Kashkari said how he feels about the sentencing would likely be no different to any other Kiwi as it wasn't a crime against "just Muslims, it was a crime against New Zealanders".

"Yes, personally I feel that those friends of ours and the community members who were directly or indirectly impacted by it, it's been a relief to see closure coming in, whether they are able to close on this or not but it's certainly going to be part of the healing process and part of the closure going through and we as a whole community, as well as New Zealanders, basically it's a closure process and I do really hope that some of those people, it helps them to get over that trauma, although a lot of them will never get over it."

He had been keeping in touch with those sharing their victim impact statements in court this week and noted how proud he was of how they handled themselves.

"I'm very proud of what they did. We all react to things differently.
"It was actually quite amazing to see some say, 'we forgive you', others say 'that they cant forget' ... I thought the way people spoke and what the did was phenomenal and the courage they had to bring to speak and the courage to be able to think about that day and that they had to face him."

Kashkari said like most other Kiwis, he'd regarded New Zealand as one of the "most safest places on earth" but despite the shooting, and making some security upgrades at mosques, that had not changed.

"As far as the Muslim communities are concerned, we've never had a mosque closed ... it was the whole principal of anybody and everybody can come in so obviously it was quite a bit of a shock for us as a community.

"I still believe we live in the safest country in the world ... but I can also say that right-wing extremists haven't gone away, we still see them."

Police Commissioner Andrew Coster said while today's sentencing was an important milestone in the judicial process, "it should not overshadow the incredible stories of determination and survival of victims, heard over the course of this week".

"It is those people I wish to acknowledge and pay tribute to. While this is an unprecedented sentence, it will not ease the grief of the victims, their families and communities, nor will it erase the abhorrence we felt as a nation.

"While this will be recorded as an historic sentence, it is the impact on victims and their stories of survival, strength, humility and forgiveness that we must remember.

"New Zealand and the world, has felt the pain of the Muslim community and the horror of such a hateful and senseless act committed in our own backyard, against our own people.

"We responded to this event with unity and our communities came closer together, which is ultimately what will ensure that all people can be safe and feel safe in this country."

He also acknowledged the hundreds of hours police staff worked over many months to ensure justice was ultimately served today.

"The investigation was one of the largest and most complex in New Zealand history, and I'm extremely proud of the team's exceptional policing through meticulous attention to detail and commitment to putting victims first.

"I also wish to acknowledge the important role our staff in Canterbury, led by District Commander Superintendent John Price. Together with other agency partners, they have worked closely with the Muslim communities in Christchurch to provide support and reassurance that they are valued members of the Canterbury community who deserve to be and feel safe."