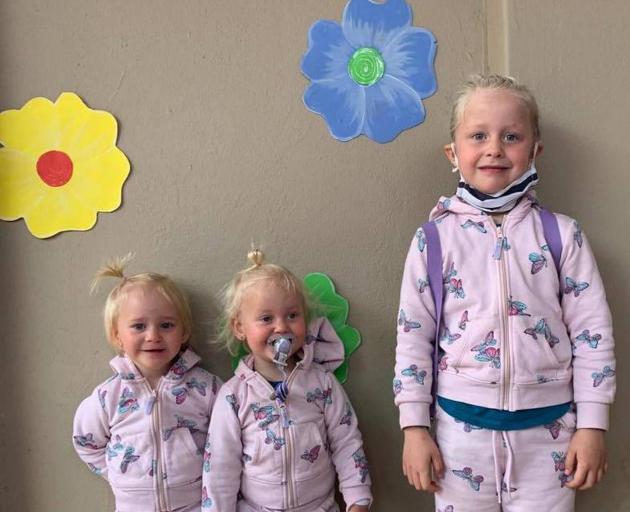 Two-year-old twins Karla and Maya Dickason and their six-year-old sister Liane. Photo: supplied
A trial date has been set for a woman who allegedly killed her three young daughters at their Timaru home in South Canterbury last month.

Lauren Anne Dickason has been charged with murdering Liané (6) and two-year-old twin sisters Maya and Karla on September 16.

The trial has been scheduled for March next year, but the 40-year-old is yet to enter a plea, as mental health assessments are continuing.

Dickason first appeared in the Timaru District Court on September 18, two days after the girls died, and was remanded in custody to a forensic psychiatric ward at Christchurch's Hillmorton Hospital.

There, she underwent a mental health assessment ahead of her first appearance in the High Court at Timaru today.

Dickason's appearance in person this morning before Justice Rachel Dunningham was excused.

She was due to appear via an audio visual link from the hospital, but the court heard that more time was needed for her health assessment.

The case is being heard in the High Court at Timaru, but today's hearing was facilitated from the Christchurch Justice Precinct.

Dickason's lawyer Kerryn Beaton, QC, sought another remand for her client at Hillmorton.

A forensic psychiatrist has been booked to assess her further this weekend.

Specific details of the case have been suppressed and Dickason is to reappear in court on October 15.

The Dickason family from South Africa arrived in Timaru just a week before the children died. They moved from Pretoria and spent their mandatory time in managed isolation before they were released to start their new life.

The accused's husband, Graham Dickason, is an orthopaedic surgeon and had a job with the South Canterbury District Health Board.

It is understood he had been at a work function with colleagues and arrived home to find the girls dead.

Dickason was unresponsive and in a critical condition. She was taken to Timaru Hospital for treatment and was stable enough to speak with police and later charged.