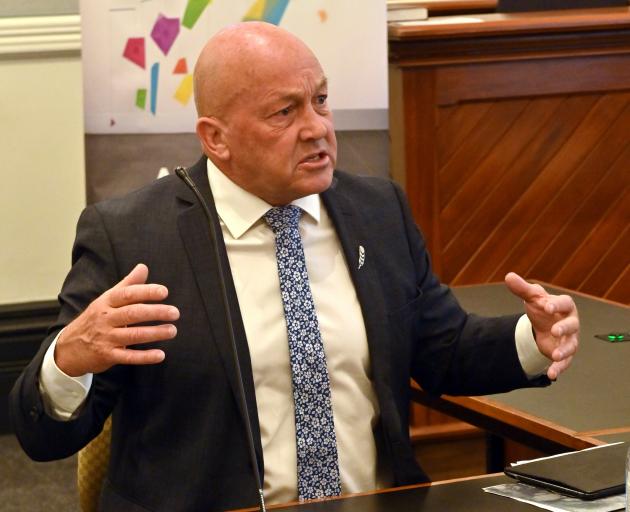 Clutha mayor Bryan Cadogan at Representation Commission hearings in Dunedin this week. PHOTO: LINDA ROBERTSON
OPINION: Normally, times of emergency are non-contentious and non-political; it is not regarded as the done thing to try to score points from a government grappling with potential or actual situations of peril threatening the country.

Hence, it is a dangerous game National is playing as the Government deals with the possibility of the novel coronavirus — now officially named Covid-19 — arriving in New Zealand.

National has at least been consistent on this; it has criticised the government response from the get-go, and on Wednesday in Parliament leader Simon Bridges told Health Minister David Clark that he did not resile from doing so.

"My health spokesperson was very quick to call for actions in this area, and there's been some criticism of that, but I make no apology on an issue of this significance for the Opposition and National Party to hold the Government to account on it."

Hard on Mr Bridges’ heels, Mr Woodhouse’s first parliamentary question for the year was to ask Dr Clark if he was satisfied that the response to the 2019 novel coronavirus outbreak was timely and appropriate?

"Yes, and it continues to be so,’’ he replied, adding that ‘‘all the decisions we have taken have been informed by science".

Covid-19, like all new diseases, is a threat health officials plan for; just two years ago, to mark the anniversary of the 1918 influenza pandemic, New Zealand staged a months-long whole-of-government preparedness exercise for a similar disease.

In many things, ministers have to be prepared to accept and adopt the recommendations of their officials because they are experts in their field.

By all means they can question it, but if advised that this is best practice, opting for a different course is fraught with danger; Mr Woodhouse’s dudgeon would indeed be high if it transpired Dr Clark had ignored his officials’ advice about how to keep Covid-19 out of New Zealand.

However, Mr Woodhouse is far from convinced that border security measures are as rigid as they ought to be to prevent the disease taking hold here.

He is quite right to ask if we are doing enough; many New Zealanders are asking the same thing.

There is, though, a fine line between robust scrutiny and vexatious nitpickery.

Mr Woodhouse has been careful so far to highlight what National’s — presumably better — response would have been had it been in government, but he does so at the risk of sparking uncertainty at best and panic at worst.

On both Wednesday and Thursday, when Julie-Anne Genter answered on behalf of Dr Clark, Mr Woodhouse quoted anecdotal reports of lax screening processes at the borders.

Dr Clark answered that New Zealand had taken those measures that "the clinical experts, the doctors, have recommended", while Ms Genter made the snappier response that "with all due respect to anecdotes that are being reported in the media, I don't think that they paint the full picture.

"Clearly, that person did not have a raging fever and so is speculating."

Unsaid was the suggestion Mr Woodhouse best not indulge in a fever of speculation himself.

For now, with no cases or even suspected cases of Covid-19 in New Zealand, arguing about how to maintain that situation is fair enough.

The big political test will come, as health officials have consistently said it might, if a case of the disease is detected in New Zealand.

Mr Woodhouse would face an enormous temptation to say he told you so, but there could well be a backlash if he did.

That is a bridge yet to be crossed, but it is one all politicians will need to tread warily.

There is probably some technical term for the sensation of being equally surprised and not surprised by a piece of news.

So it was on Tuesday, when Invercargill National MP Sarah Dowie announced she was stepping down as her party’s electorate candidate in this year’s election.

Given how absolutely dreadful much of her last term in Parliament must have been, with constant swirl and scandal surrounding her, who could blame Ms Dowie for wanting to get away from it all?

On the other hand, she was selected unopposed to contest her seat again, and in the run-up to Christmas was showing renewed enthusiasm for the parliamentary contest.

While it is a chestnut of political retirement statements, Ms Dowie’s statement that this was the right decision for her and her family seems genuine and utterly understandable.

Ms Dowie will serve her full term, while National is now on the lookout for a new Invercargill candidate.

There might be some brotherly banter between mayors Tim and Bryan Cadogan after their respective appearances before the Representation Commission in Dunedin this week.

Bryan Cadogan kicked off on behalf of the Clutha District Council, bewailing the draft electorate boundaries and the imminent dismemberment of his district into three different seats.

In stark contrast, next up was Mayor Tim of Central Otago, who grudgingly admitted — in a reversal of his written submission — that the boundary changes proposed were probably the only choice the commission had, even if he was not best pleased about them.