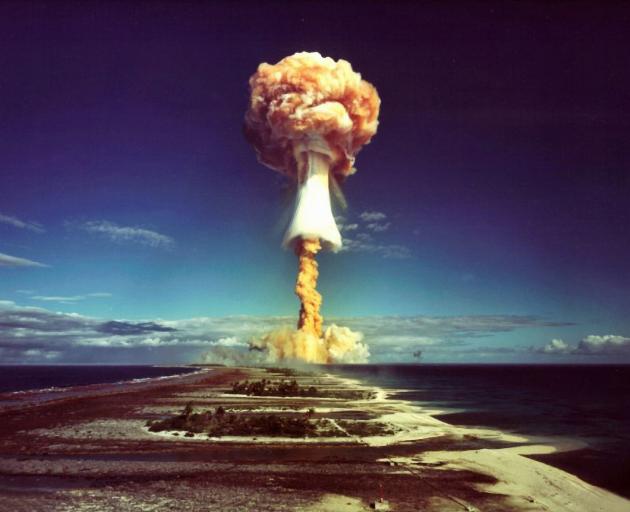 A mushroom cloud after the explosion of a French atomic bomb above the atoll of Mururoa, also known as Aopuni in 1971. Photo: via Getty Images
A search is underway for descendants of service personnel who witnessed a nuclear test at Mururoa Atoll to take part in a nationwide study.

A Mururoa Nuclear Veterans Group wants all veterans who were deployed to Mururoa Atoll in 1973, and their families, to be part of a study as it's believed their children may have been affected by their parents' exposure to radiation.

The then Labour government sent a frigate to Mururoa Atoll, including then Cabinet Minister Fraser Colman, to protest against French nuclear testing there.

Mururoa Nuclear Veterans Group wants all people on the frigate, and their families to be part of a study as it's believed their children may have been affected by their parents' exposure to radiation.

The group, which was established in 2013 to press the government to help families with nuclear related illnesses, had 135 members who served at the protest. Of those, 56 had children or grandchildren with unexplained medical conditions.

University of Otago associate professor David McBride, has been tasked with conducting the first medical testing of veterans' children and grandchildren.

To establish whether genetic transfer of illnesses are related to exposure to nuclear radiation and create a registry "would be difficult but not impossible," Mr McBride said.

"If we don't do it now, when we die no one else is going to care. Their sickness and problems we consider is directly attributable to our service," Mr Cox said.

"Be it Operation Grapple, Christmas Island, Mururoa, anywhere else ... widows and children especially we are looking for."

The University of Otago will carry out the study from October or November this year, but a registry needs to be created for the study to work.

Mr Cox encouraged anyone with a nuclear testing background to come forward to take part in the study or identify themselves in order to be included in the registry.