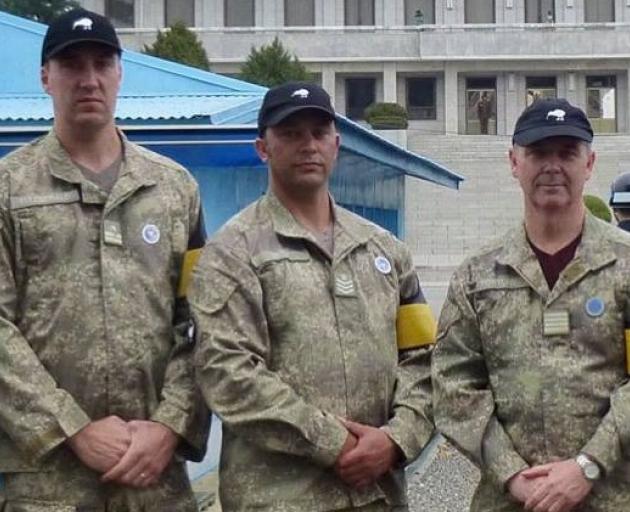 Staff Sergeant Aaron Giles (centre), from Gore, pictured with other NZDF personnel in South Korea, will spend Christmas in the demilitarised zone. Photo: Supplied
A Gore soldier in South Korea who served as a pallbearer for the repatriation of a soldier’s remains from the Korean War says he still has a lot to see in the country.

Staff Sergeant Aaron Giles  joined the New Zealand Army in 1996 and has been mainly based with the First Battalion Royal New Zealand Regiment (1RNZIR).

He left in 2005 but returned later in 2010 as an instructor at the Army Depot training new recruits.

He has since served in the Queen Alexandra’s Mounted Rifles (QAMR) and again in 1RNZIR.

"My role here is in the Operations Cell where we look after movements to and from the DMZ and to assist the organisation’s efforts to supervise the implementation of the Armistice Agreement."

If violations occur within the agreement they are settled through investigations and negotiations, Sgt Giles says.

Serving as the pallbearer for the unknown soldier was a highlight of time in South Korea. Tissue samples will go to Hawaii to be DNA-tested to confirm which country the soldier was from. Sgt Giles said he hoped it would mean the soldier could  be connected to living relatives.

He and a "small Kiwi contingent" would share Christmas Day together.

"Seeing as we are away from our families and cannot share Christmas with them, I wish all my whanau and friends a very Merry Christmas and a happy and safe New Years."

To his children — Tamia, Hoani and Piripi — he says he "loves you all very much and hope you have happy holiday".

While he does miss home, he said South Korea had much to offer.

"It is actually a very nice country and I look forward to exploring this country and its history as often as possible."

The country had a lot of history he hoped to learn more about.

"But I will always miss the beauty of home and enjoying the sun and holidays with family and friends," Sgt Giles said.

Working under the UNCMAC involves various service personnel from the Navy, Army and Air Force Defence Force and countries all involved with the Armistice agreement.

This includes the United States, Canada, Colombia, Denmark and the Republic of Korea (South Korea).

"Working with other nations is good as each country and person brings something different to the organisation and we can all learn new and different ways of doing things to achieve the same goal," Sgt Giles says.

He says the deployment is very different from others in regards to the role that New Zealand and similar staff do.

"We can be involved in so many different activities with the UNCMAC which is why I jumped at the chance to be a part of it."

Sgt Giles has been in South Korea since the start of November where he will remain until well past Christmas.

"South Korea is a nice country. The cities are very busy but very clean — but I still have a lot to see here in this country."