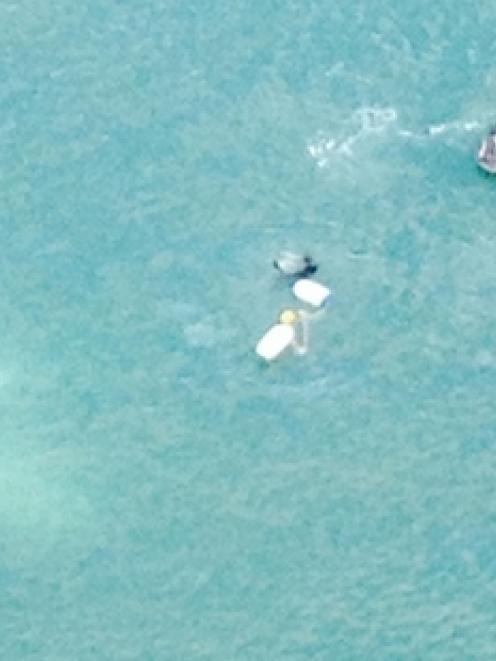 Coastguard, surfers and police secure the light aircraft which crashed into Raglan harbour yesterday.
A woman remains in a serious condition in hospital following a light plane crash at Raglan yesterday.

Three people were injured when the Piper Cherokee crashed into the water about 100 metres off the beach, which was packed with holidaymakers, about 1.40pm.

All three - one woman and two men - were on board the light aircraft at the time.

The 26-year-old Auckland woman is now stable in the high dependency unit at Waikato Hospital, while the two men have been discharged from the emergency department, the hospital said.

The men were aged 23 and 46, and were also from Auckland.

It is believed the plane's engine cut out shortly after take-off, and the pilot was attempting to make it back to the airstrip when the crash happened, police said yesterday.

Beach-goers yesterday spoke of the horror of seeing the plane crash into Raglan Harbour just moments after it was seen "puttering" in the air.

There were about 200 people on the beach at the time, and many rushed to help rescue those on board, while boaties and kayakers also made their way to the scene as the plane began to sink under the water.

The Hamilton-based Westpac Rescue Helicopter, which flew the seriously injured woman to hospital, praised the local rescue services, in particular the Raglan Coast Guard, for their "incredible initial response".

"All three occupants of the aircraft were rescued from the water within minutes," the chopper said.