She has been in isolation since Sunday, May 8 when her partner Clarke Gayford tested positive.

The Prime Minister has been symptomatic since Friday evening, returning a weak positive last night and a clear positive this morning on a RAT test. At this stage her symptoms are moderate.

As a result the Prime Minister will be required to isolate until the morning of Saturday, May 21. She will not be in Parliament this week for the release of the Government's Emissions Reduction Plan this coming Monday or for the Budget on Thursday. Travel arrangements for her trade mission to the United States are unaffected at this stage.

Phil Twyford, the Minister for Trade and Export Growth has also tested positive for Covid-19 this morning.

He tested positive from a RAT after beginning to feel symptomatic on Friday evening, and is displaying moderate symptoms, a spokesperson said.

As a result of Twyford's test result, he is no longer able to travel to Timor-Leste on Monday, where he was to represent the Government at the 20th anniversary of Timor-Leste's independence, and the inauguration of Dr Jose Ramos-Horta as Timor-Leste's next President.

Twyford said, "I'm disappointed I am no longer able to travel to Timor-Leste this week. It is a country I have a special connection with, and I was looking forward to representing the New Zealand Government at this important milestone, and reaffirming the strong friendship between our two countries."

The spokesperson said New Zealand's Ambassador to Timor-Leste, Philip Hewitt, will instead represent the New Zealand Government at these events.

The Prime Minister will undertake what duties she can remotely this week, but Deputy Prime Minister Grant Robertson will take the post-cabinet press conference on Monday 16 May.

"This is a milestone week for the Government and I'm gutted I can't be there for it," Ardern said.

"Our emissions reduction plan sets the path to achieve our carbon zero goal and the budget addresses the long-term future and security of New Zealand's health system.

"But as I said earlier in the week isolating with Covid-19 is a very kiwi experience this year and my family is no different." 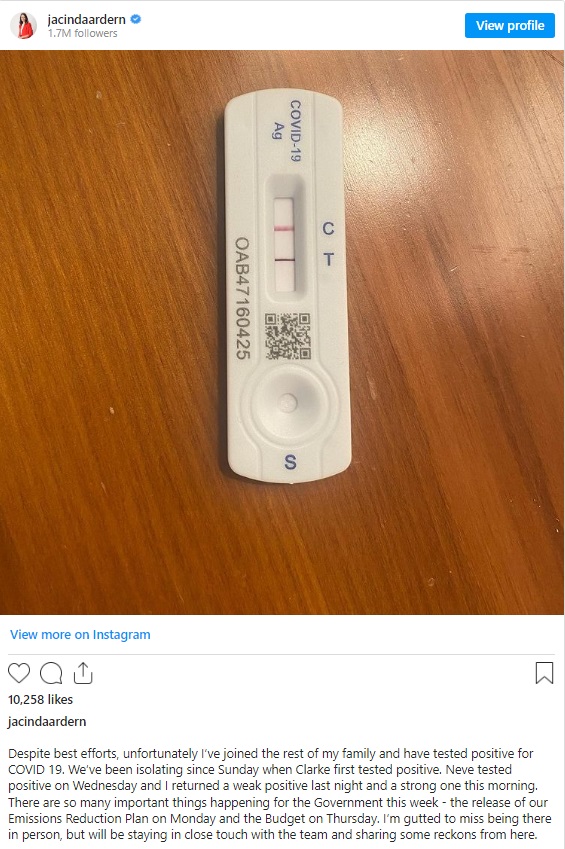 The Prime Minister is far from alone - more than a million Kiwis have tested positive for the virus since the pandemic began, although experts think the actual number of infections is double that.

Among them are a slew of fellow politicians, including National Party leader Christopher Luxon and Covid-19 Response Minister Chris Hipkins in March.

Environment Minister David Parker was the first New Zealand MP to test positive for the virus.

Internationally, Ardern may be one of the last leaders to remain Covid-free until today.

Many world leaders having been infected over the past two years, including former US president Donald Trump and current British Prime Minister Boris Johnson, both of whom were hospitalised with the virus in 2020.

The presidents of Mexico, Poland and Pakistan have all twice caught the virus.

Royalty also haven't been spared: the Queen, Prince Charles (twice), Prince William and Camilla, Duchess of Cornwall have been among the 520 million cases worldwide.