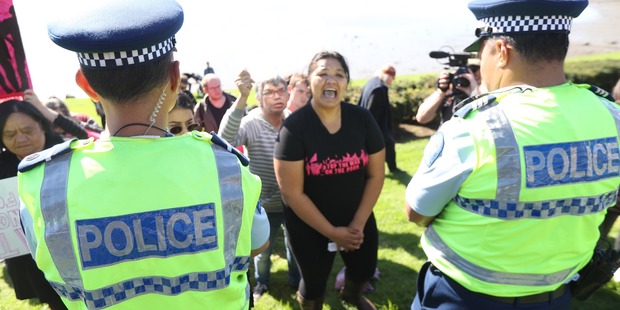 A mob of welfare activists attempted to break through police lines to where Prime Minister Bill English was speaking.

One protester made a break for it and was tackled and handcuffed by three police officers.

He was arrested for trespassing.

The protest was organised by Auckland Action Against Poverty (AAAP).

Spokeswoman Vanessa Cole said the group was calling for three key systemic changes to alleviate poverty - the mass building of state housing, a living income for everyone, and the end of penalties against beneficiaries.

"We have seen massive levels of poverty in Aotearoa," she said.

"Our MPs own nearly 400 properties and we wonder why they're not solving the housing crisis."

The group of 30 activists chanted slogans like "stop the war on the poor" and "cut back, fight back".

Protesting on Mother's Day, the group said it also wanted to abolish a law which it claimed results in mums' benefits being slashed by up to $28 if they did not include the father's name on their child's birth certificate.

AAAP co-ordinator Alastair Russell spoke passionately about a woman who took her own life allegedly after Work and Income told her they were not going to give her any more housing support, rendering her homeless.

Now the 31-year-old's mum is looking after nine grandchildren and living in emergency accommodation that costs $3500 a week, Russell said. He believed that money would be better off towards putting them in a proper rental.

Theresa Jeffries shouted that she got paid $1.55 an hour for looking after her severely disabled child. Her daughter fell off a fence in 2011 and broke her neck. She now lives in extreme pain and partial paralysis.

Jeffries said her care of the sick and infirm benefit is $262 a week.

Donna Potini has been an advocate for beneficiaries for three years. In that time, she said she has seen many evicted and become homeless.

Last week she said she helped a mum with two children, one of whom has a chronic kidney illness, who had been sleeping in a car for two weeks.

"You could see sickness all over his little face."

Sela Pousini, 27, was a fierce speaker at the event. She said as a mum of three, a beneficiary and having watched her parents get flooded out of their home she has seen the systemic failings of the welfare system first hand.

"It's about teaching people they have rights.