Ardern received her second jab in front of media this afternoon, jokingly asking: "Anyone else had a live injection before?"

She said the jab was "just fine".

"Really, really easy," said the Prime Minister, who was handed an orange lollipop and a sticker.

Ardern was at Hamilton's Te Awa vaccination centre, a partnership between iwi Waikato Tainui and the Waikato DHB, which is able to vaccinate 1000 people a day.

Yesterday 350,000 vaccine doses arrived, meaning more than a million had arrived through July. There were over 600 vaccination sites across the country, with more to come.

From today those aged over 60 would be able to book their vaccine appointments.

While all those over 60 were eligible, where people were in the country would determine how quickly this would happen, Ardern said.

There was a vaccination for everyone this year.

Ardern urged Kiwis to get vaccinated: "We are not out of the woods yet. For the vaccine to be as effective as possible we need everybody to have it."

Today's update coincides with the start of the first tranche of those in Group 4 being able to book vaccinations: those aged 60 years and older. 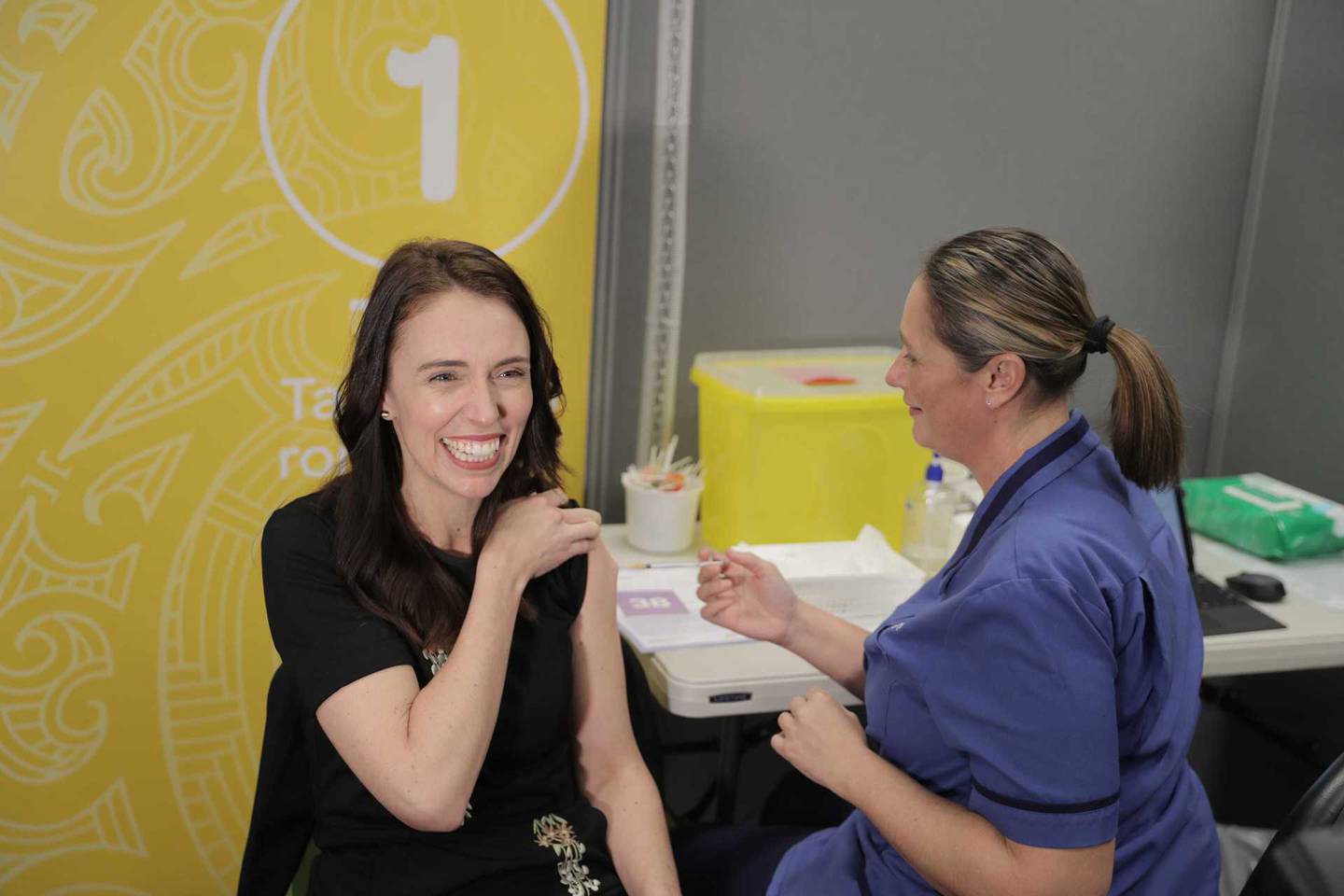 Jacinda Ardern received her second Covid jab in Hamilton today. Photo: NZ Herald
There were 1 million people in Group 3 and more than 70 percent of them had already been vaccinated or were booked in for a jab, Ardern said.

There was a much smaller group of people in the first tranche of Group 4, and so she said people in Group 3 should not fear missing out.

Ardern said the rollout was "exactly where we intended to be".

In today's vaccine rollout update the Ministry of Health said that as of midnight last night, 1,759,154 doses of the Pfizer vaccination have been administered - more than 206,100 doses up on this time last week.

Nearly 700,000 people have now received their second dose, which means they're fully vaccinated.

The Ministry of Health said it was about 3 percent ahead of target.

In case numbers, there were no cases of Covid-19 in the community and one positive case in a recent returnee in a managed isolation facility.

Ten previously reported cases have now recovered. The number of active cases in New Zealand is 43.

There had been no subsequent detections of Covid-19 in wastewater at the New Plymouth wastewater treatment plant so far, but daily sampling would continue for the next week along with further samples from sites around the Taranaki region.

Health officials were still encouraging people in Taranaki with symptoms to get tested, as well as those who had returned from Australia. Over the last six days, 1082 swabs had been taken, all returning negative results.

The positive case in managed isolation was a person who arrived from the United States, and was picked up in the day one test.

The Ministry of Health reported it had delivered 115,454 Group 3 vaccinations in the past week - 79 percent more than for the same period a month ago.

As of last week, about 13 percent of the population was fully vaccinated and about 19 percent had been given one vaccination.

However, only about 10 percent of people in Group 3 were fully vaccinated, leading some to call for the start of Group 4 to be delayed.

Just under 180,000 of the 1.7 million people estimated to be in group 3 were fully vaccinated. 17 percent had been given their first shot.

The Government has resisted delaying, saying efforts would continue to get Group 3 people (those aged more than 65 or with underlying health conditions) vaccinated. However, there was no reason not to start on Group 4 as vaccine supply increased and the workforce of vaccinators increased.

About 1.5m doses of Pfizer vaccines were expected to land in August.

It is also ahead of the first planned mass vaccination event in Manukau from Friday to Sunday, which was intended to vaccinate 15,000 people.

However, organisers have admitted they had struggled to get people to sign up for it. It was intended for staff and students at the Manukau Institute of Technology and their families, but the DHB cast the net wider after only about 2000 people made bookings. About 140,000 have now been invited in a bid to fill the slots.

Shame she can't get her ministers to sort out the vaccination of group 3 people. The vaccine roll out has been a disaster thanks to the governments ineptitude and poor planning.

Good for her. Shame about the rest of us.