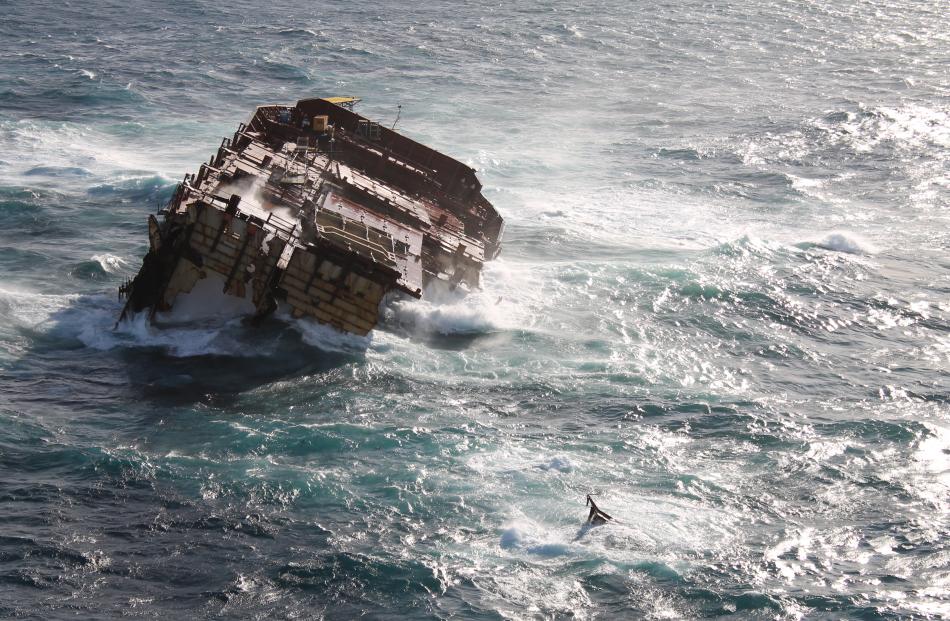 Rena's battered bow continues to cling to Astrolabe Reef, hours after heavy seas and strong winds sunk her stern below the surface.

The sinking comes on the six-month anniversary of the October 5 grounding of the 236m container ship.

Maritime New Zealand (MNZ) is today warning Western Bay's coastal communities that the stern's sinking could see debris and small amounts of oil spill in to the sea and wash ashore.

By yesterday afternoon a light sheen of oil stretched about 1km north-west of the wreck.

MNZ spokesman Ross Henderson said because of rough seas it was impossible to know how far the stern of the Rena had slipped.

"It's moved a reasonable amount because the stern section has now sunk. It is now submerged, to what degree is not known.''

He said the sinking represented a "significant change'' for the now-infamous wreck. It is not unexpected given the severe weather we've had in the past couple of days,'' he said.

MNZ on-scene commander Rob Service said staff would monitor the shoreline for debris and oil over the coming days but warned residents and visitors to the Western Bay to be cautious on beaches over the Easter break.

Shipping lanes were also being monitored for debris and MNZ was warning boat skippers and vessel masters to take extreme care as debris spilt into the sea.
A two nautical mile exclusion zone remained in place around Astrolabe Reef.

Strong winds and rough seas continued to impact on on-water debris recovery operations which Mr Service said would resume as soon as conditions were safe.

The National Oiled Wildlife Response Team, based at Massey University, had been alerted to the sinking and would respond as needed. The Department of Conservation had also been advised.

While weather conditions at Astrolabe Reef were forecast to gradually ease, winds would remain strong and the sea was expected to remain rough for several days.

MNZ and the salvors, Svitzer, would continue to monitor and assess the condition of the wreck, an would conduct a closer inspection when conditions allow.