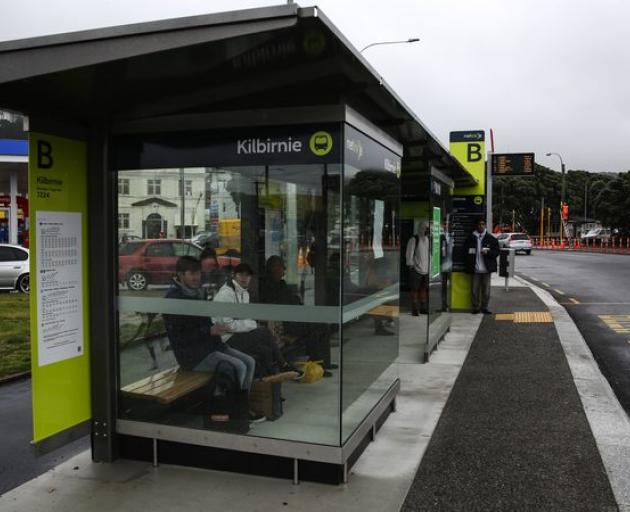 The Kilbirnie bus hub in Wellington had to be modified after the council announced the cycleway route. Photo: RNZ
The cost of installing seven bus hubs in the capital has blown out to more than $14 million.

The hubs connect buses from the outer suburbs with the main routes.

Last year, the seven hubs were expected to cost $3.5 million to install.

However, the agenda for the Greater Wellington Transport Committee Meeting on Tuesday showed the cost has risen to $14.4 million.

That figure puts the cost of each bus stop at $2 million.

The agenda said the costs of the project were higher than originally anticipated, but it added that because it has already consulted on the project, and further delays would impact on customer levels of service, it does not need to go back to the public.

Now she said that original cost was based on very early estimates, when the council thought it was putting in traditional bus shelters, but after consulting with the Wellington City Council it was decided more complex structures were needed.

Ms Donaldson said the bus hubs were no ordinary bus stops. They're encased in glass for security so people could see in and out. Each one had a pole, connected to power, the network and CCTV and contained a weather-proof high tech cabinet.

They also required much stronger foundations because of the heavy galvanised structure.

Each site also had different underground problems, including cables that weren't identified, or the placement of sewer pipes.

Problems
The project hasn't been without its problems. At the Miramar hub the electronic sign was situated so anyone sitting inside the hub couldn't see it.

Ms Donaldson said the council was constrained where it could put the sign because of underground services, and city council requirements and standards.

Meanwhile the hub at Kilbirnie had to modified after the council announced the cycleway route.

"A lot of this is because we have to work with our partners and adjust things according to their requirements. Some things may be not as desirable as they should be," she said.

At Courtenay Place the number of new hubs has increased from one to three, because the existing ones were found to be substandard, while new super bus shelters were required at Wellington Station which weren't identified in the original programme.

"All those things have come with extra costs that until we did all the design and discovered all the issues couldn't possibly have been calculated," she said.

Ms Donaldson said she expected the hubs to be finished in February.

The service has been plagued with problems since it launched in July and is now the subject of an independent review.