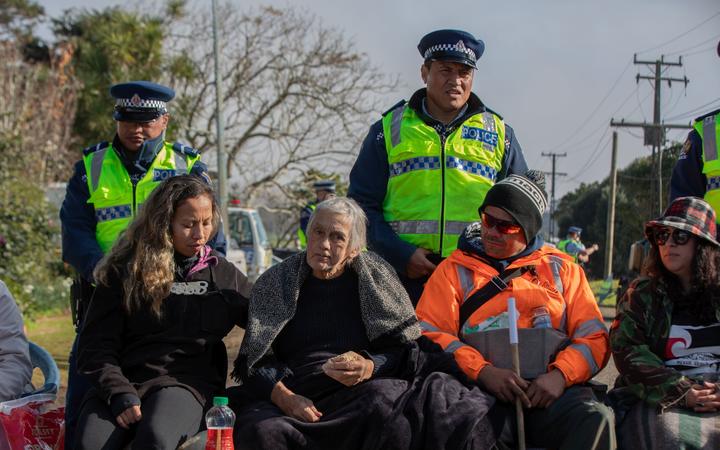 People continue to occupy Ihumātao after protesters were served an eviction notice. Photo: RNZ
Ihumātao, believed to be one of the first places where Māori in Tāmaki Makaurau settled, farmed and thrived, has been designated to make way for 480 new homes in a city crippled by a housing crisis.

Here's a brief history of the land:

1863: The land at Ihumātao was taken 'by proclamation' during the invasion of the Waikato, according to SOUL.

It was confiscated under the New Zealand Settlements Act, thus breaching the 1840 Treaty of Waitangi agreement.

1869: It was sold to a private owner believed to be the Wallace family whose descendants held on to the land for more than a century.

2012: Auckland Council tried to make the land an open, public space, but the move was challenged in the Environment Court and council was directed to rezone the land, meaning it could be developed for business or residential purposes in future.

February 2014: Te Kawerau ā Maki and the Crown signed a Deed of Settlement at Makaurau Marae in Māngere.

July 2014: After the Super City was formed, the government and Auckland Council designated 32 hectares adjacent to the Otuataua Stonefields Historic Reserve as a Special Housing Area (SHA).

2015: Pania Newton, one of the founders of SOUL along with cousins and other locals raised concerns saying they would oppose the zoning of the land.

2016: It was sold to Fletcher Residential - a wholly-owned subsidiary of Fletcher Building.

September 2016: Supporters built a structure representing a whare and a pou whenua was erected on Ihumatao Quarry Road.

5 November 2016: About 20 members of the community started camping by the side of the road. Some continued to live there - sleeping in caravans, sheds, tents and even an empty boat.

December 2016: Joe Hawke, who led the occupation of Bastion Point/Takaparawhau from January 1977 to May 1978, visited Ihumātao to give his support and some advice to those occupying the land.

The same month, Fletcher Building was given the green light for the housing development but Heritage New Zealand denied them the ability to build.

April 2017: The campaigners took their fight to the United Nations hoping for an intervention to address alleged breaches under the Declaration of the Rights of Indigenous People.

The UN report recognised that consultation and consent from Māori had not been adequately sought.

It also recommended the government evaluate the plan's compliance with the Treaty of Waitangi and the United Nations Declaration on the Rights of Indigenous Peoples.

November 2018: The Environment Court declined to overturn the permission granted to Fletcher Building to build the houses in Māngere.

By then Fletcher Building said it had been through the Waitangi Tribunal, the Māori Land Court and the Environment Court - as well as the normal consenting process.

February 2019: Fletcher Building said if a good offer came along, they would be open to selling the Ihumātao property.

March 2019: SOUL along with supporters in Wellington took their petition to Parliament demanding government intervention to prevent a confrontation on the land.

The same month, the Māori Affairs select committee said it was considering the case and could recommend the government find a way to stop the development, initiate a Treaty justice process or even return the land to the mana whenua.

23 July 2019: An eviction notice was served to those occupying the land.

24 July 2019: Auckland mayor Phil Goff said after several efforts there was nothing more the council could do to.

25 July 2019: Some Auckland councillors said they regretted signing off on the Ihumātao land being used for housing and voted unanimously in favour of organising an urgent meeting between interested parties as a last-ditch effort to resolve the dispute.

houses need to be built . clear this rabble and build...