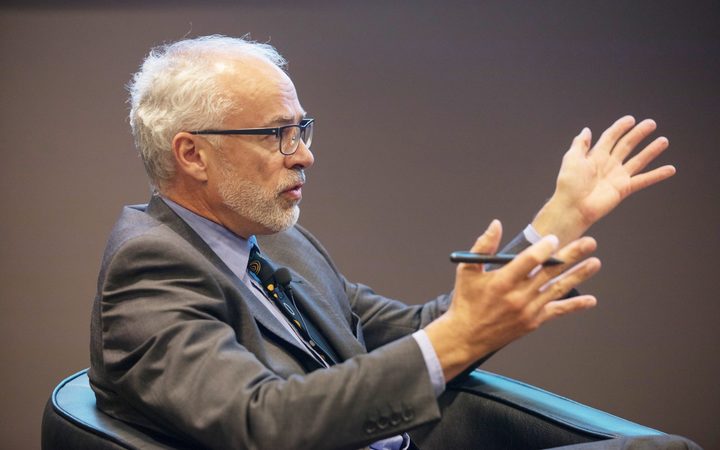 Epidemiologist Tony Blakely says many people who get Omicron will be asymtomatic and not know they were a case. Photo: Billy Wong/University of Auckland
New Zealand's plan to slow the spread of Omicron is sensible and should help to reduce the peak of the outbreak, says an epidemiologist based in Australia.

All of New Zealand has moved into the red traffic light setting after a group who travelled from the Tasman region to Auckland and back were confirmed to have the new variant of Covid-19.

"Compared to what we did here - which was not much to be honest, going into Christmas and New Year - in New South Wales and Victoria we were opening up at this stage."

He believes with good measures in place New Zealand could have a maximum of between 600 to 900 people in hospital in any one day.

"I know those numbers sounds scary but you'll get through it pretty well and the trick is just to slow things down and I think your current settings should do that quite nicely."

Counties Manukau DHB modelling showed Auckland will face 175 to 190 hospitalisations on any given day at the outbreak's height, with at least 10 to 20 cases requiring intensive care on any given day.

Blakely says when numbers of Omicron cases begin to rise in about 10 days, people who are elderly or with co-morbidities should hunker down and stay at home.

Omicron is similar in severity to one of the earlier strains of the virus, Blakely said.

Many people who get Omircon will be asymtomatic and not know they were a case, he said.

"I'm not trying to trivalise Omicron, it still does end up killing people but it's much less severe than Delta and particularly so with high vaccination levels.

"There's a lesson that we've got over here, which is that you've still got Delta in the background and so if we look at New South Wales, about a third of all the people in ICU were still those with Delta and about half of the people dying were those with Delta yet Delta was probably only about 5 percent of the infections out in the community."

New Zealand should be highly prioritising contact tracing to any residual Delta infections and trying to keep those numbers low so there isn't a double epidemic, he said.

"If you can try and make sure Delta is kept really really low so it's just Omicron spreading through New Zealand that will make things a lot better along with high vaccination rate, high boosting rates, wearing masks and all the rest of it."

Asked what type of mask New Zealanders should be using, Blakely said: "Any mask helps, but better masks are better."

"There are issues with fitting them. If you're in a healthcare setting you'll want them fitted properly, or an aged care setting, if you're a general citizen like most of us are then actually just having one of those will probably help."

When the numbers start to really rise in three to four weeks time, it would be a good time to distribute masks, he said.

"The virus will eventually get to about half the New Zealand population regardless, [it's about] just slowing it down with things like better masks."