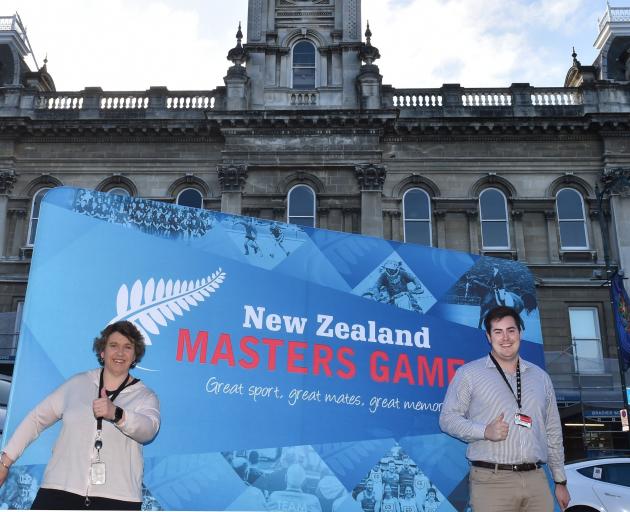 Masters Games organisers Vicki Kestila and Ben Anngow in the Octagon at the launch of the 2022 Games last year. PHOTO: GREGOR RICHARDSON
A raft of major events across Dunedin have ground to a halt, following the Government’s move to a Red traffic light setting yesterday.

One of the largest events to be cancelled is the Otago Community Trust New Zealand Masters Games, which was due to draw about 5000 competitors from across the country on February 5-13.

It is New Zealand’s largest and longest-running multisport event.

Games manager Vicki Kestila said under new safety protocols announced last month, the annual event could only be held under an Orange or Green traffic light setting for the region.

A huge amount of work had gone into the planning of what organisers had hoped would be the best games yet, she said.

"We’re deeply disappointed that the games can no longer go ahead as planned, but our No 1 priority is for the safety and wellbeing of our participants, staff and volunteers."

All entry fees would be automatically refunded (less a $20 administration fee) as per the event’s cancellation policy, she said.

"We know many of our entrants will be feeling saddened by the news.

"The New Zealand Masters Games is a popular event that brings friends and family together to compete and have fun.

"We’ll all miss the buzz the event brings into Dunedin with the thousands of competitors and supporters travelling into the city to take part.

"But unfortunately, this is the challenging reality of living with Covid-19."

News of the Red light setting was devastating for The Great Moscow Circus managers and its performers yesterday.

A spokeswoman said the circus gave its last performance last night and had cancelled the rest of its tour. Tickets already sold would be reimbursed.

"It’s not viable for us to show to 100 people. We’d have to put on 20 or 30 shows to make that work, and that’s just not safe or healthy for our performers."

The circus would stay at the Dunedin site until it had decided what to do next, she said.

"There’s no Government funding at the moment.

"We will need to speak to the council tomorrow to see what assistance they can give.

"We don’t know what to do right now. We’re a little bit in limbo."

The Otago University Students’ Association Dunedin Craft Beer and Food Festival, due to be held on February 4-5, has also been cancelled.

"OUSA is saddened to have no other option but to cancel the upcoming Dunedin Craft Beer and Food Festival," OUSA chief executive officer Debbie Downs said. University Orientation events were also under the spotlight, she said.

"We respect Government’s decision to put the health and safety of Aotearoa first at this point in time."

Dunedin fans have been celebrating Scottish poet Robbie Burns’ birthday since 1885, by enjoying traditional Scottish food and drink, and a ceilidh.

However, Toitu director Cam McCracken said the event "wouldn’t really work in Red", so it had been cancelled.

The Octagonal Day and Otago Centre pipe band contest, which were to be held in Dunedin on February 19-20, were cancelled before the Government’s Red announcement.

Event co-ordinator Maureen Hurrell said about 400 pipe band members from as far away as Christchurch and Invercargill usually attended, but many of the pipe bands were not keen to commit to this year’s contests because of Covid-19.

"Band’s weren’t wanting to come in case something happened and they got stuck between a rock and a hard place.

Dunedin City Council communications and marketing manager Graham McKerracher said the possibility of holding council events, including the Chinese New Year celebrations on February 11, would be discussed during meetings today.

The event was to be held at the Edgar Centre on February 25-26.

"This is the third time we will have had to postpone it.

"Something will happen, but I just don’t know what yet."