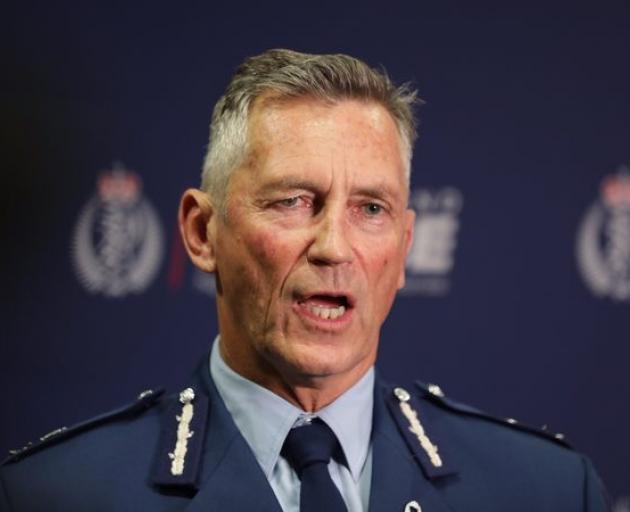 Commissioner Mike Bush. Photo: RNZ
It appears the shootings in Christchurch yesterday were the actions of a lone gunman, police now say.

Commissioner Mike Bush briefed the media this afternoon on the latest on 49 people who were killed at two mosques.

Only one person, Brenton Tarrant, had been charged with murder.

Mr Bush said at this stage he had not seen anything that would suggest there was more than one person involved in the shootings, which happened just seven minutes apart.

Police were still trying to work out the exact involvement of a couple who were the only other people still being held in custody over the incident.

Mr Bush praised the actions of the arresting officers who rammed the shooter's car off the road.

"Not only were there IED's (Improvised Explosive Devices) in that vehicle, so it was a very dangerous manoeuvre, there were also firearms in that vehicle. So, our staff who were well equipped did engage with that person and again put themselves in real danger to keep the community safe."

Meanwhile, a loophole in the law may have allowed Tarrant to get hold of the semi-automatic weapons that did so much damage in Christchurch.

Mr Bush said he only had a Category A firearms licence which would have prevented him from legally owning semi-automatic weapons.

But it may still have been possible for him to have bought his firearms legally and then to have altered changed them into semi-automatic, he said.

"A Category A firearms holder can purchase the firearms without the magazines or the things that will enable them to be in the state that they were. I was very happy to hear the prime minister's comments this morning that there will be a change in the gun laws."

In addition to those who died, Christchurch Hospital chief of surgery Greg Robertson said 39 people remained in hospital and seven patients admitted yesterday had now been discharged.

"The others included a 4-year-old girl who has been transferred to the Starship Hospital in Auckland in a critical condition. Four patients died on their way in to the hospital yesterday. Those injured ranged in ages from the very young to quite elderly patients."

It was very unusual for local surgeons to deal with gunshot wounds, and certainly on this scale, he said.

"As you would expect the wounds from gunshots are often quite significant. We have had patients with injuries to most parts of the body that range from superficial soft tissue injuries to more complex injuries involving the chest, the abdomen, the pelvis, the long bones and the head."

Canterbury District Health Board chief executive David Meates said the people who had been killed were yet to be formally identified but that would get underway this afternoon when the chief coroner arrived in Christchurch.

He recognised the pressures and challenges for the families as according to Islamic tradition a body should be buried as soon as possible after a death.

It is believed that Tarrant was living in Dunedin from at least August 2017 and travelled through the Middle East and Afghanistan last year.

Cordons were still in place and armed officers were standing guard at the house where the gunman was believed to live in the suburb of Andersons Bay.

Tarrant entered no plea to the single charge of murder laid against him.

He did not seek bail and was remanded in custody till his first High Court appearance on 5 April.