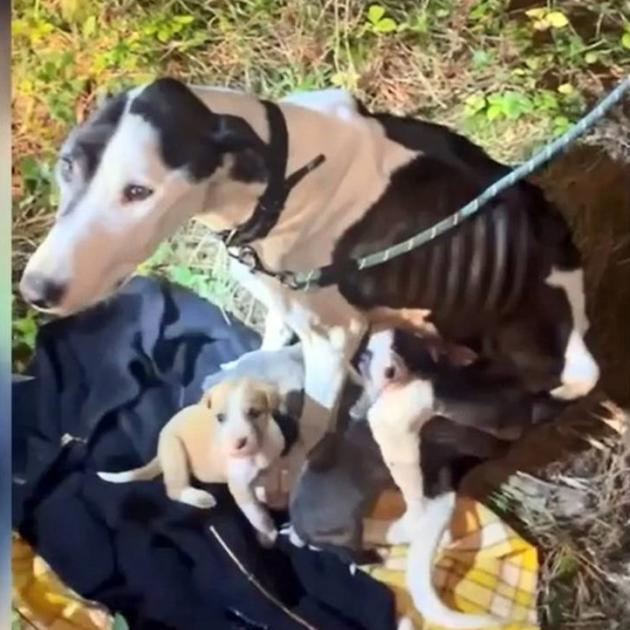 All Paws Count Murupara Trust rescued the "worst case of emaciated dogs" in the trust's history last Tuesday at about 7.30pm after being contacted by concerned hunters who provided GPS co-ordinates.

One mother dog was found, emaciated, tied to a tree with four puppies nearby.

Another adult dog was found tied to a tree nearby.

"Mama Tess" and her puppies were taken to Vada's Angels Animal Rescue Tauranga while the male dog, Tobey, was taken to Paws Restart in Auckland.

All Paws Count Murupara Trust chairwoman Galina Turisheva said the team was still "in a cloud of anger, frustration and disbelief" about what happened to the dogs.

She said Mama Tess was still a "walking skeleton" but was regaining strength through a refeeding programme that involved being fed every two hours.

Turisheva said, given the level of starvation and dehydration, all the dogs were lucky to be alive.

A social media post from Vada's Angels Animal Rescue Tauranga stated that Tess was "exhausted" but was starting to relax.

When she arrived in their care she went for blood tests which were surprisingly perfect and she was put on a low-fat diet for 10 to 14 days to prevent the refeeding syndrome.

This was because adding too much fat to a starving dog's diet caused fatty liver and could turn into organ failure.

It said she had been sitting on her pups, which was believed to be the cause of the limp one of her runts had. They were being closely monitored when they were together.

Tess also had some puncture wounds and at least five rotten teeth which needed to be removed once she was healthy enough.

"She is doing well and adjusting to home life."

"She is happy, warm and in safe hands with us at the farm and will head to a brilliant foster once we know she is on the right road to recovery."

The male dog found in the forest, Tobey, was sent to Paws Restart in Auckland.

Social media posts over the last week said Tobey had "obviously been beaten" as he looked at people with total fear, cowered and shook uncontrollably if a hand moved towards him.

"When he goes to the toilet I have to gently remind him that he doesn't need to eat it to survive. Those days are well and truly over," the post said.

When he arrived he spent the first few hours in the car as he was too terrified to come out. Today was the first day that he ventured into the house.

He had a quiet den with a heated bed, a big teddy bear, blankets and warm coats, and was the "gentlest of souls".

He's fed small meals every two hours and spent the first two days eating and sleeping in a quiet space.

Two days ago he ventured out for a look around the yard.

"He has a long road to recovery ahead of him, mentally and physically. He is not a young boy, maybe about five years old, and I would imagine those five years have been hell.

"After all he has been through, he still greets us with a tentative tail wag and a look of love and hope in his eyes."

Vada's Angels Animal Rescue and Paws Restart have been approached for comment.