Temporary repair work on the Auckland Harbour Bridge has been successfully carried out overnight, the New Zealand Transport Agency says.

A truck crashed into a strut on the bridge arch on Friday, after being hit by 127km/h wind gusts, closing four lanes.

Overnight, the lower half of the strut was replaced with a section of freshly fabricated steel.

Another lane heading into the city and an extra northbound lane were reopened this morning.

The agency's transport services manager, Brett Gliddon, said it wasn't entirely straightforward getting the strut in place and removing the old one, so re-opening the two extra lanes took a little longer than hoped. 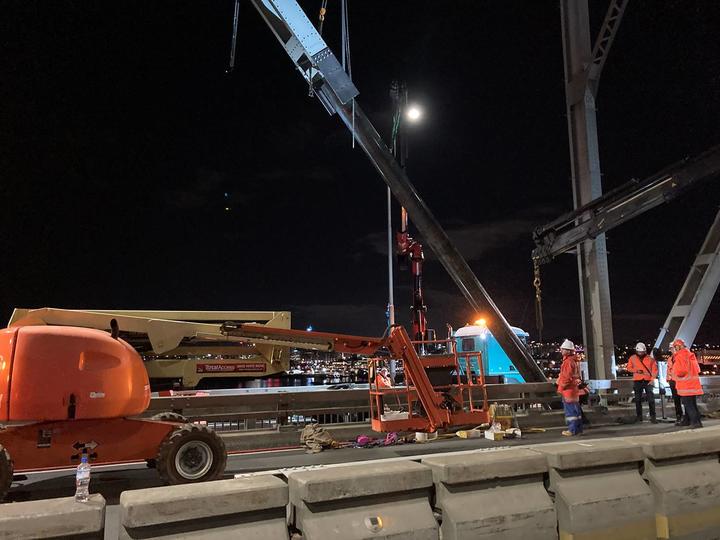 "[The old strut] didn't come out as expected so they had to cut it, and then when you create a new strut in such a quick time, they did have to modify it slightly on site.

"That strut has been in there for sixty-plus years so it took a little bit of getting out."

The permanent solution will take several weeks, with design work under way and fabricating and peer review to come.

The agency had set aside two nights to do the work, but low wind and good temperatures and visibility meant the installation and testing was done in one night.

"We're still going to encourage people to use public transport, to continue to use the western ring route - especially heavy vehicles - if they can and also to change their travel pattern.

"The bridge, while we've got this temporary fix in, is still not in its final state and still has a level of vulnerability with it." 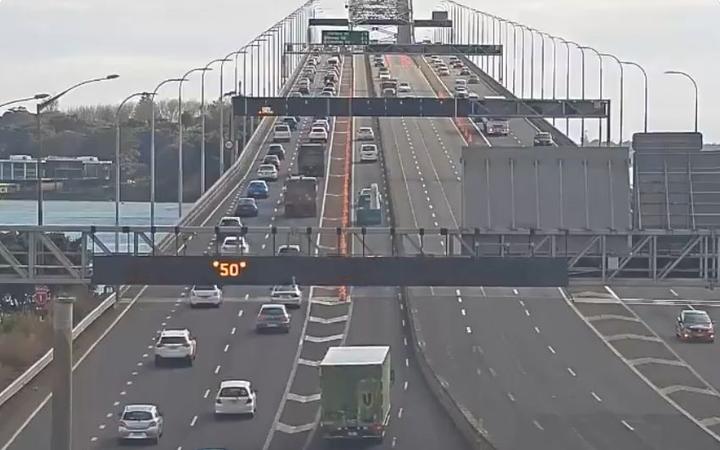 Two further lanes were reopened this morning after a temporary fix on the damaged strut. Photo: NZTA
Overweight vehicles are not allowed on the bridge, and heavy vehicles are asked to use the western ring route until the permanent solution is installed. Buses will continue to use the clip-on lanes.

The bus priority lane that had been in place for the past two days at the Fanshawe Street on-ramp has been relocated to the left of the on-ramp.

The Curran Street northbound on-ramp is being re-opened to traffic.