New Zealand had expressed, and continued to strongly state, its abhorrence of Russia’s invasion of Ukraine, Ms Mahuta said. 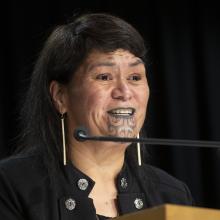 Nanaia Mahuta.
In the past week Prime Minister Jacinda Ardern has spoken strongly about the war and its impact at both the Nato forum in Spain, and again when meeting British Prime Minister Boris Johnson.

New Zealand also agreed to formally intervene as a third party in the case that Ukraine is taking to the International Court of Justice to legally challenge the Russian invasion, placing this country at the heart of the world opposition to Russia’s actions.

"The war is having a global impact and is urging New Zealand into ensuring that our interests and values are very much at the forefront of how we present in a number of fora," Ms Mahuta, who was in Dunedin for the University of Otago Foreign Policy School opening on Friday, told the Otago Daily Times.

"The Prime Minister has expressed our national interest and our values, in promoting peace and stability."

The Russian invasion was illegal and unprovoked and New Zealand continued to back Ukrainian sovereignty, Ms Mahuta said.

That had come at a cost — $33million in aid of various kinds so far — and that cost would likely grow higher she said.

"This may well be a protracted war and that means we will have to continue to calibrate and reflect on what we can do to support Ukraine."

Global uncertainty and difficult economic times meant that free trade agreements, such as the one recently concluded with the United Kingdom and the one signed last week between New Zealand and the European Union, were crucial, Ms Mahuta said.

"We are keen to continue to support multilateral efforts to strengthen the opportunities and advantages that we can gain from working together in areas where we absolutely have a common aspiration. Human rights comes to mind, but also the rules and norms that uphold international responsibility.

"The fact that our prime minister has been able to use our diplomatic response to achieve a high quality FTA is massive at this point in time as there are other pressing issues for many of the nations in the EU, but we have managed to achieve an agreement."

Ms Mahuta is scheduled to attend the Pacific Island Forum in a fortnight, assuming she recovers in time having tested positive for Covid-19 on Saturday.

The trip was likely to be an important one, given the recent spotlight on New Zealand’s relationship with the Pacific nations after China accelerated its diplomatic focus on the region.

"I often speak about how important our place in the Pacific is, but also how regional architecture will underpin our decisions in our common interest, so we have a vested interest in the Pacific Island Forum and strengthening it."