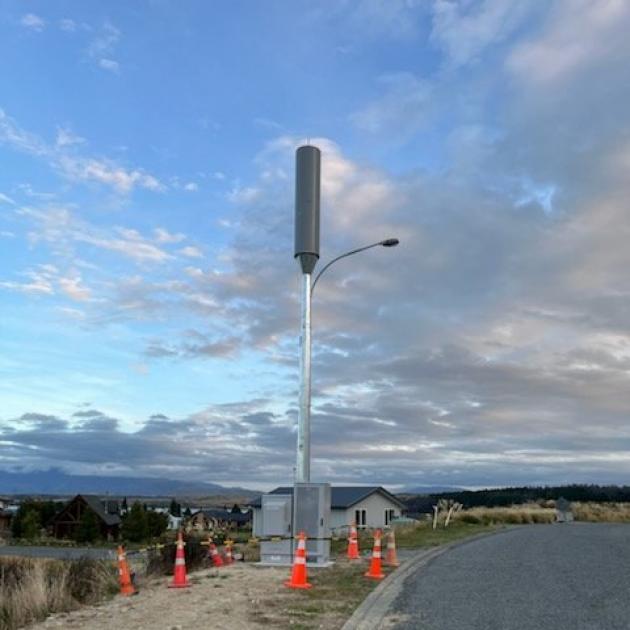 The new cell tower in Lake Ohau Village should be live from next week. PHOTO: SUPPLIED
After fire swept through Lake Ohau Village in October 2020, destroying 48 homes and buildings, residents have been calling for better mobile coverage.

From next week, they should have it.

A new cell tower, which will benefit customers of Spark, Vodafone and 2degrees, was installed in the village last week, and it went live yesterday.

"Our network is helping ensure more connected and safer communities and roading networks, allowing more comprehensive access to emergency services, preparing New Zealand for the returning visitor sector, assisting businesses to attract and retain employees, increasing access to high-quality health and social services, helping bridge the rural v urban digital divide giving us all the ability to be flexible as we navigate a new looking future, and helping people stay connected when and where they want and need to."

The new infrastructure was was funded by phase two of the rural broadband initiative.

The Ohau site had been "in the planning" for several years, after it was identified as an area where connectivity could be improved when the Ministry of Business, Innovation and Employment undertook consultation in 2015.

While there was some concern from residents and property owners about the final location of the site, overall it had been met positively by the community, who were looking forward to improved wireless broadband and voice calling services, Mrs Evans said.

Waitaki Mayor Gary Kircher said previously that reception in Ohau had been patchy beyond calls and texts — and the Waitaki District Council had supported residents’ calls for better connectivity after the fire.

"It was certainly identified by the community as one of the things they’d like, better cellphone coverage, after the fire," he said.

The council was examining options for a personal emergency alert system in each house.

Also being considered was installing more sirens in the village. The council installed a fire siren about 2012, which Fire and Emergency New Zealand said played a "key role" in alerting residents when the fire began early on October 4, 2020.