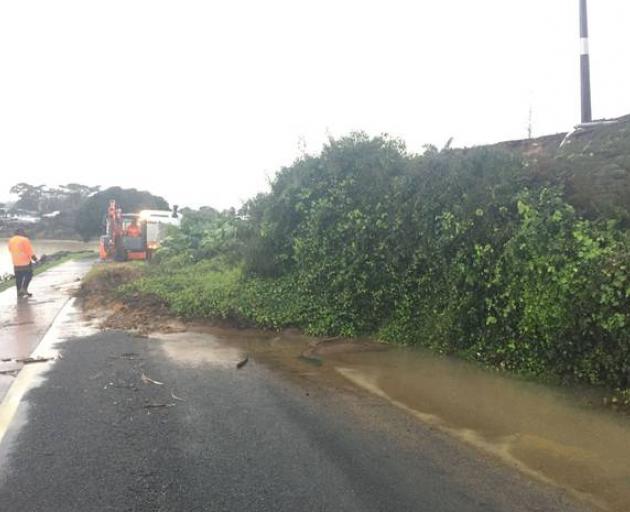 Beach Rd, Onerahi is completely blocked by a slip. A worker who was helping to clear the scene said similar clean up crews were all across Whangarei clearing other sites. Photo via NZ Herald
A once-in-500 year storm has slammed Northland, flooding shops and forcing residents to evacuate homes.

Fire crews rushed out to 212 emergency call outs as the storm dumped 220mm on Whangarei.

Whangārei residents are this morning being asked to conserve water after the city's water treatment plants were "struggling to cope with the intense rainfall", the Whangārei District Council said.

Residents in Onerahi and Whangārei Heads were advised not to drink or use tap water except in emergencies after a burst water main on Riverside Dr had affected water supply.

Some incredible rain totals from across Northland last night, with several gauges exceeding 250mm of rain in 24hrs, including over 150mm in just 4 hours at Whangarei Aero, and 56.8mm at Kaikohe in just 1 hour. Track the rain here: https://t.co/F9fZPWgf0f ^RK pic.twitter.com/NDUmL3MUXv

A MetService severe thunderstorm watch remains in force for Northland until 10.30am, meaning waking residents could be in for further flooding and damage.

Meteorologist Alwyn Bakker said the intense storm had been created by the unusual interaction between two low pressure zones in a manner that caused a direct hit on Northland.

"We've done some calculations over here in MetService," Bakker said of the storm.

"And 220mm for Whangārei has what we call a greater than 500 year return period. What that means is we see this kind of thing once in every 500 years."

Bakker said MetService's continued thunderstorm watch meant rainfalls between 40mm-60mm an hour could still fall in the morning. By the afternoon, however, the storm should break and turn to periods of showers later in the day before petering off tomorrow.

He estimated about 30 people had evacuated homes across Northland with 12 in Whangārei requiring assistance from fire crews.

Some relocated to the two Civil Defence welfare centres set up in the Kamo Scout Hall and Onerahi Community Hall.

Luckily no one appeared to be injured, Soljak said.

Today would be all about making an assessment of the damage, putting priorities around that and seeing how long it will take to restore services, he said.

Between the flooding, damaged roads and slips there was a lot to be done across the region this morning, he said.

He asked residents to stay off the roads today.

Civil Defence emergency management officer Claire Nyberg, who was manning the Civil Defence Centre at the Onerahi Community Hall, said she had been set up since 8pm yesterday.

Nyberg said only one person had been evacuated from their home and brought to the centre.

Nyberg, who had worked with Civil Defence for 12 years, said last night's rainfall was comparable to when tropical cyclone Wilma hit New Zealand and some Pacific islands in 2011.

A number of households have also evacuated due to rising river levels across the Tolaga Bay region.

There are multiple slips on State Highway 35 and Gisborne District Council Civil Defence Emergency Management are urging people not to travel unless absolutely necessary.

State Highway 35 between Te Puia Springs and Tolaga Bay is closed due to flooding and motorists are being asked to take a detour via SH2, via Waioeka Gorge.

There is surface flooding throughout the district and the council's director of lifelines, Dave Wilson, said in a statement that contractors will be out clearing the roads at first light.

The Hikuwai River is currently at 11.94m and rising, making it nearly equivalent to the recorded flood level in June 2018. High tide passed at 3.30am.

Three houses at Mangatuna chose to evacuate and five more are cut off, but safe for now, Wilson said.

Uawa Civil Defence Community Link members have established a base at Tolaga Bay Area School and been calling residents to warn them of the conditions. The Uawa catchment is already sodden after recent rainfall.

Over the last 24 hours, Te Puia has had the biggest fall with 283mm of rain. Around the city 50-80mm fell, with 81mm recorded at Goodwin Road. Persistent 80-100mm is forecast to fall north of Tolaga Bay over the next 24 hours.

"This is an unusual weather pattern for this time of year," Wilson said. "It has come from the north east and brought with it long persistent rainfall saturating the region."

"What that means is we see this kind of thing once in every 500 years."

I really do wish that so called "experts" can say things like that. I know I'm getting close to being a "senior" citizen, but I have experienced several "once in a 100 year" floods, droughts, landslides, etc. I also realise that a lot of information on historical events can be gained through geology, but I have yet to see a repeat of the 1520 met service forecast and related news items.

The problem is, you're trying to forecast a very unpredictable "mother nature" who is just as likely to do the same next month and then how do you describe it, a monthy event, or a twice in 500 year event ??

I think most people are aware that global weather patterns are changing and there are possibly going to be more extreme weather events, earthquakes, tsunamis and other little surprises mother nature throws our way.

Why don't we just say ... "Well, that was a bit unexpected, let's hope we don't see that happen again for a while."

My heart goes out to those in Whangarei who have been affected by this flooding.