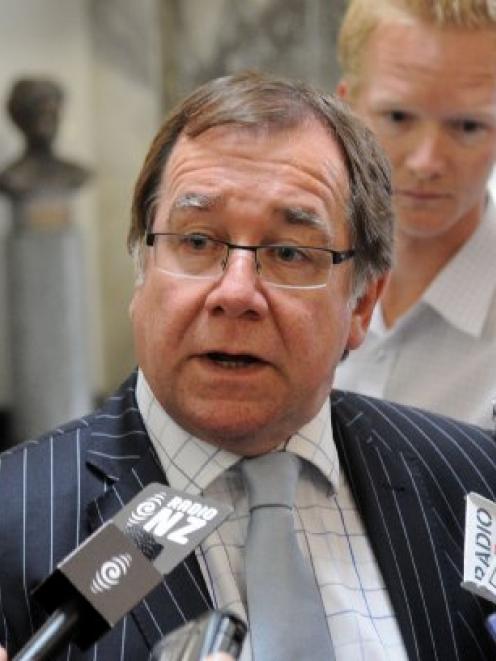 Murray McCully.
The controversial deal that saw $11.5 million of taxpayer money on a Saudi farm is to be examined by the Auditor-General.

Lyn Provost has announced she will carry out an inquiry into the expenditure of public money on the Saudi Arabia Food Security Partnership.

Mrs Provost received several requests, including from members of Parliament, the New Zealand Taxpayers' Union, and in a petition from over 10,000 New Zealanders, to inquire into aspects of the deal.

Foreign Affairs Minister Murray McCully, who was the driving force behind the deal, said he welcomed the scrutiny by Mrs Provost.

"We have said from the outset that the Auditor-General is entitled to scrutinise any spending of public money, whenever she chooses, and we welcome her decision to carry out an inquiry into the Saudi Food Security Partnership," Mr McCully said.

"The Government is comfortable with the process that was followed in relation to the Agrihub, and the wider Food Security Partnership, and relevant departments, including Mfat [the Ministry of Foreign Affairs and Trade], will provide all necessary support to the inquiry."

About $11.5 million has been spent on sending New Zealand sheep and equipment to businessman Hamood Al Khalaf's farm in Saudi Arabia, with $6 million of that spent on establishing a farm, including equipment and technology.

Mr McCully has said it was partly done to appease Mr Al Khalaf, who lost millions of dollars during a New Zealand ban on live sheep exports.

His ill feeling was a major obstacle in the way of a free-trade deal in the region, Mr McCully said, and negotiations were now able to move on. The farm would also act as a demonstration base for New Zealand agribusiness, and remove the threat of legal action, he said.

Opposition parties have labelled the deal a bribe, after a $4 million payment to the Al Khalaf Group was revealed, and that the farm and all animals and equipment would be owned by the group.

Labour's trade and export growth spokesman David Parker said the Auditor-General's announcement was "important, necessary and welcome", and the deal had never made sense.

"The suppression of information has added to the suspicions. There are many disturbing aspects to this highly unusual arrangement," Mr Parker said.

"If, as appears likely, there has been improper conduct, or misrepresentation of the true nature of these payments, clarity from the Auditor General will help avoid any repeat and will go some way to restoring New Zealand's international reputation for fair dealing."

Green Party co-leader James Shaw said today's announcement would mean the Government will "finally be made to answer questions about the Saudi sheep deal".

"Murray McCully is deeply involved in this deal and his position as Minister of Foreign Affairs is untenable while an investigation is ongoing. He must be stood down by John Key.

"It has been my position for some time now that this is a bribe designed to appease a single businessman and get our free trade deal over the line at any cost. The taxpayers sent 900 sheep and $11 million dollars into the desert and it is now finally time to find out why."

Mrs Provost said her inquiry would look at:

* The amount of money budgeted for the project, how it has been used and the outcomes it has achieved;

* Whether the spending on services was within the appropriations of Vote Foreign Affairs and Trade, as authorised by Parliament;

* The procurement and contract management practices used by the Mfat to purchase services relating to the deal - opposition parties have questioned why Brownrigg Agriculture won a key contract, given it has a long association with Mr Al Khalaf and was lobbying on his behalf;

* Whether the services received were in keeping with the business case and contract specifications, and any other related matters.

Documents relating to the Saudi farm deal were released this month. They revealed that Mrs Provost had reviewed an initial business case for the deal, at the request of Cabinet.

Her office judged the initial business case to be "weak", and later distanced itself from the deal, stressing its involvement had to be limited.

While the release of the documents - which came after complaints to the Ombudsman from media and others - shed some light on the deal, they were heavily redacted.

Labour leader Andrew Little backed the Greens' call for Mr McCully to be stood down while the inquiry took place, saying "nothing less than New Zealand's international reputation" was at stake.

However, NZ First leader Winston Peters, despite being strongly critical of the deal, said he did not believe the Foreign Minister should be stood down.

"The man could be innocent. The present circumstances don't point to that. But let's find out that he is guilty before we cast judgment."

THE SAUDI FARM - TIMELINE OF A DEAL

* In 2003, publicity around the treatment of live-sheep exports led to a voluntary moratorium.

* In 2007, the Labour Government banned the export of live animals for slaughter.

* In 2009, Agriculture Minister David Carter began negotiations with Saudi Arabia for a resumption of live-sheep exports.

* In 2010, the National Government extended the ban.

* February 2013, the Cabinet approved a proposal by Foreign Minister Murray McCully to pay $4 million to Mr Hmood Al Khalaf's business to secure it to run an agri-hub to promote New Zealand agriculture in Saudi Arabia and as a settlement of a long-running dispute over the ban on live-sheep exports, and $6 million to be paid to NZ businesses to deliver their services and help set-up the Saudi farm.

The Government also paid $1.5 million for 900 pregnant Awassi breeding ewes of Mr Al Khalaf's to be flown to the Saudi farm.

* May, 2015, after media reports on the deal, Mr McCully's office releases Cabinet papers that reveal the full cost of the deal, including the $4 million "facilitation payment" to Mr Al Khalaf. Previously, only the $6 million figure had been released.

* June, 2015, it is confirmed that lambs born on the Saudi farm suffered an extremely high death rate. The Government initially said a sand storm could be to blame, before Brownrigg Agriculture - a Hawkes Bay company that advocated on behalf of Mr Al Khalaf and later won a tender to set-up the farm - pointed to heavy rain and illnesses.