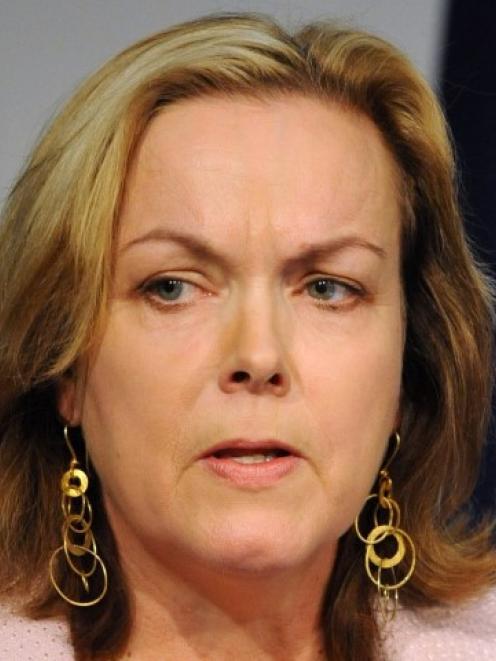 Judith Collins
Whale Oil blogger Cameron Slater is backing his mate Judith Collins, who has resigned over an email suggesting she was involved in a plan to oust the former head of the Serious Fraud Office while she was Police Minister.

Mr Slater said this afternoon that he had embellished Ms Collins' role in an email he had written, in which he stated that Ms Collins was "gunning for" former SFO head Adam Feeley in 2011.

The email has thrown a grenade into the election campaign, with Prime Minister John Key changing his plans today to announce the resignation at a special media conference in Parliament.

Ms Collins said she had done nothing wrong and would fight to clear her name.

Her resignation was for her ministerial roles, but she will continue to be the MP for Papakura and stand in this election.

The email, from October 5, 2011, was sent to "mark", "Carrick", and one other person whose name has been redacted.

At the time Mr Feeley was under pressure for celebrating the laying of charges against failed finance company Bridgecorp with a bottle of champagne recovered from Bridgecorp's former headquarters.

Ms Collins had referred the matter to the State Services Commission, which found that Mr Feeley had had used poor judgement.

In the email, released by Mr Key, Mr Slater says that Ms Collins was "gunning for" Mr Feeley.

"I also spoke at length with the Minister responsible today (Judith Collins). She is gunning for Feeley," the email says.

"Any information that we can provide her on his background is appreciated. I have outlined for her a coming blog post about the mass staff turnover and she had added that to the review of the State Services Commissioner. She is using his review of these events to go on a trawl looking for anything else. It is my opinion that Feeley's position is untenable."

Today Mr Slater said he was simply "talking up a big game".

He said he was not lying when he used the term "gunning for".

"Embellished is a good word. It's better than a lie, isn't it? ... If Judith Collins was gunning for somebody, she'd have got them.

"I've not proved the downfall for my good mate's career. A criminal hacker mounting a political conspiracy to subvert our democracy and undermine our election has done that, and the media and all of you are complicit."

Opposition parties rounded on the resignation, saying the email confirmed the kind of dodgy tactics that were alleged in Nicky Hager's book Dirty Politics.

Labour leader David Cunliffe called for a commission of inquiry, which would have the power to require the production of evidence, to compel witnesses, and to take evidence on oath.

Ms Collins defended herself this afternoon, saying she had been subjected to a "two year smear campaign" of "false allegations and innuendos".

She staunchly denied trying to remove Mr Feeley and said she looked forward to clearing her name.

"I cannot control what other people say about me or when they leverage off my name."

She no longer wanted to be a "daily distraction" from the election campaign.

"This is an extremely distressing and disappointing time ... I will of course cooperate with any inquiry."

Mr Key said a person had passed the email to a Beehive staffer, who had given it to his chief of staff Wayne Eagleson yesterday.

He said it was a "very serious" matter, and an inquiry would investigate. More announcements on the nature of the inquiry would be made in coming days.

"The statement could be completely wrong, it could completely misrepresent the situation. But I can't let that rest unresolved," Mr Key said.

"It's not tenable for her to carry on as minister until these issues are resolved."

He said it was no secret that Ms Collins regularly talked to Mr Slater.

If National was re-elected, Ms Collins would not be a Cabinet minister, and he hinted that it would be a hard road back, even if she was cleared of any wrongdoing.

"She may need to take a little time to reflect as well ... there's been one or two slips in recent times."

Mr Feeley said he had no comment at the moment when contacted by the Herald.

Carrick Graham, a public relations specialist who received the email, also did not wish to comment. He is a central figure in Dirty Politics, which alleges he ran corporate campaigns via Whale Oil.

The email also mentions Cathy Odgers, a lawyer who used to blog as Cactus Kate. She also declined to comment.

Mr Key has spent months staunchly defending Ms Collins, who has been on her final warning since the Oravida scandal earlier this year.

Ms Collins had dinner with a Chinese border official and Oravida bosses while on a taxpayer-funded trip to China. Her husband David Wong Tung is a director of Oravida, and the company has donated tens of thousands of dollars to the National Party.

Opposition parties have sought to paint the dinner as a conflict of interest to help benefit her husband's company.

In May this year Ms Collins apologised after she attacked journalist Katie Bradford, following the ministerial resignation of her colleague Maurice Williamson.

Last month she was again under pressure after it was revealed that police in South Auckland had wrongly changed recorded crime statistics. Ms Collins had heard information about the statistics, but did not seek further information, nor pass it on to Police Minister Anne Tolley.

This month, after the release of Dirty Politics, she admitted releasing the details of public servant Simon Pleasants to Mr Slater, who then abused Mr Pleasants on Whale Oil, prompting death threats against Mr Pleasants.

This week Ms Collins had to back-track after she wrongly claimed that the Privacy Commissioner had cleared her of any wrongdoing over Mr Pleasants.

Ms Collins was also in the spotlight as New Zealand First leader Winston Peters claimed that someone from her circle had approached him and asked if he would be willing to work with a Collins-led National Party.

She strongly denied the claim.

Several polls this week showed strong public opinion in favour of Ms Collins being stood down for her behaviour that was revealed in Dirty Politics.

"Two big stories the NZ Herald broke regarding Adam Feeley in 2011 were independent of Whale Oil, and sourced from other contacts. It was good journalism, and in the public interest.

"Reporters will have conversations with contacts from all sides of the political spectrum every day - it's our job to be fully aware of the source and their motivation, verify the information, and present it in a fair, accurate and balanced manner.

"Whale Oil was one of a number of people Jared Savage spoke to as the issue rolled on, to find out what he knew. Some information would have been shared, but none of it, in our view, pivotal or relevant to our inquiries."