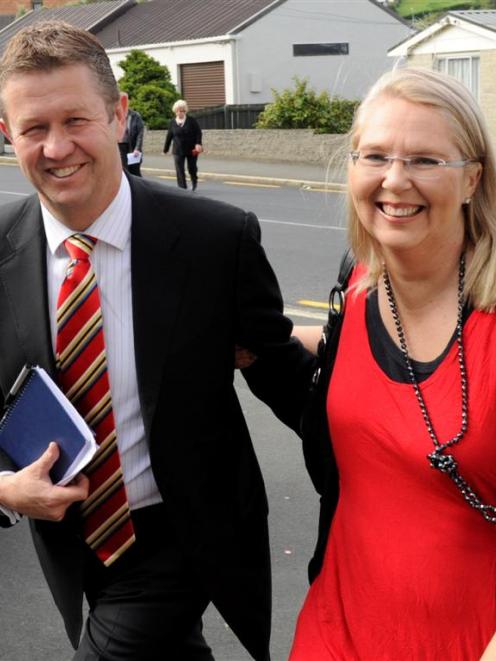 David Cunliffe and wife Karen arrive at last night's meeting of Labour Party members and supporters in Dunedin.
Dunedin North MP David Clark and Dunedin South MP Clare Curran will need to make a difficult decision on Tuesday when they decide who to support as the new leader of the Labour Party.

Contenders David Cunliffe and David Shearer were in the city last night to address nearly 140 party members and supporters to put their case as to why they should be elected to lead Labour in a process of rejuvenation.

While Mr Cunliffe appeared to have the edge on Mr Shearer from those attending who were approached by the Otago Daily Times last night, in the end the vote will be made by the Labour caucus which includes the two Dunedin MPs. 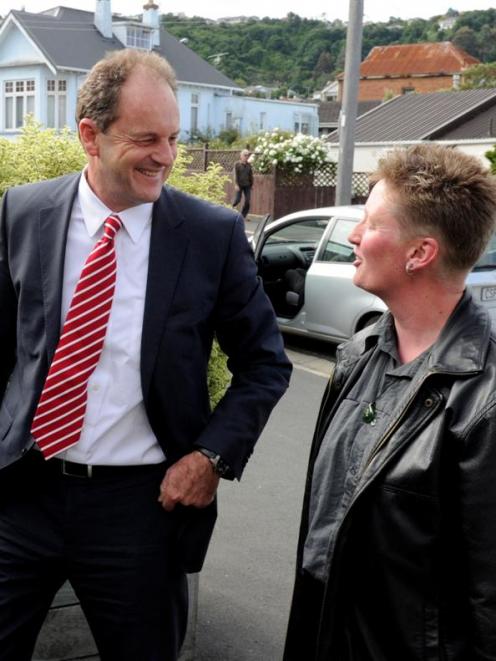 David Shearer is welcomed to the leadership meeting by Dunedin North Labour Party member Barb Long. Photos by Gerard O'Brien.
The two contenders faced complex and detailed questions on topics such as local procurement in the case of Hillside Workshops, boosting regional economic growth and reducing the deficit.

Mr Shearer said there was real enthusiasm at last night's meeting and the leadership challenge had brought people together after an election loss.

When he put his name forward for the leadership he did not expect such enthusiasm and the numbers of people prepared to turn out to talk to the MPs.

"I was expecting sitting around having a chat to members but you can't do that when these sorts of numbers turn up."

Asked whether he could work with Mr Cunliffe if he lost on Tuesday, Mr Shearer said he and Mr Cunliffe had adjoining electorates and had worked closely together on related issues.

"The bottom line is that this is what happens in politics. You compete to get the nomination, you compete for election and you compete for positions within the party. In the end you get on and support the party," he said.

Mr Cunliffe was also confident that each MP could work with the other one after Tuesday and he made a personal pledge to work hard for the party, no matter the outcome of the vote.

"I spoke to supporters tonight from the heart and without notes. The decision is up their MPs and right throughout the country, hundreds of Labour supporters are meeting their MPs asking them to carry their views through to caucus on Tuesday," he said.

Former Dunedin North MP Stan Rodger praised the process where Messrs Cunliffe and Shearer had presented themselves to party members.

He believed it was unprecedented in the history of the party.

"I do not know of an example before where members have been consulted in this way."

Asked if the process could prove divisive for the party as members and supporters identified with each contender, Mr Rodger said there was always competition in the parliamentary "campus" and the divisions would have been there, regardless of which process was followed.

"People are feeling passionate about the process and being part of it," he said.

Wellington Central MP Grant Robertson, who has put himself forward to become the deputy if Mr Shearer wins on Tuesday, said the MPs would have addressed close to 2000 Labour members and supporters by the time the meetings ended in Auckland tomorrow night.

The meetings had been conducted in good spirit without rancour between the two camps.

Although it came down to the 34 caucus votes on Tuesday, the MPs have been inundated with views on how they should vote.

"MPs will take that into account. In the long term, there may be a chance to change the rules for members to have a direct say but you will need to balance that with caucus' knowledge about the candidate. Ultimately, it is the leader's job to run the team," he said.