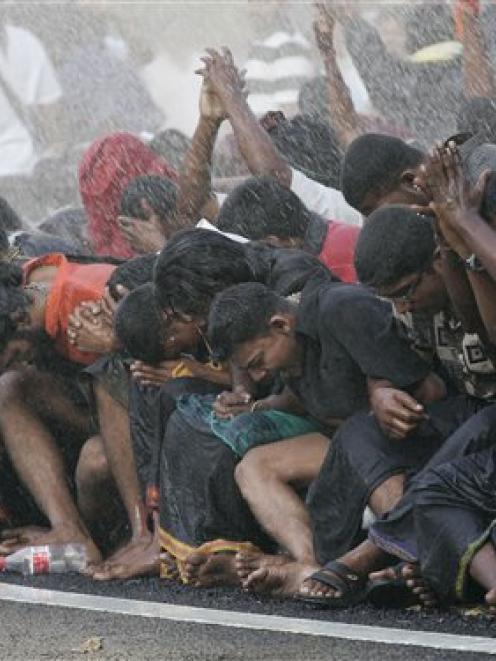 In this 2007 file photo, ethnic Indians sit along a roadside as they are sprayed water by riot police during a street protest in Kuala Lumpur. Photo by AP.
The last time Lee Hung Poh walked unassisted was 40 years ago, before a bullet fired in the heat of Malaysia's worst race riots sliced through her spine and shattered her future.

Neither the 57-year-old Lee nor her country has ever completely recovered.

To be sure, Malaysia, a Southeast Asian nation of 27 million people, has been remarkably stable since the weeklong mayhem that began May 13, 1969. But as the country marks the 40th anniversary of the riots, its uneasy racial detente is coming under stress.

Mindful of the mounting disenchantment, a new prime minister is proposing a partial rollback of a main legacy of the riots, an affirmative action programme for the majority Malays. If change goes smoothly, it may be for the better. As Malaysians have grown wealthier and better educated, they have demanded a more open discussion of race, and the government has acquiesced to a degree. But the shift is also stirring old passions - the Malays and Chinese in particular don't fully trust each other - and therein lies a risk.

Several Malay ruling party officials have pledged to defend affirmative action "to the last drop of blood," and a top Malay newspaper urged Malays last month to "rise and unite." "

All of us want peaceful lives, nobody wants to fight each other. But you read the newspaper and keep seeing problems with racial issues," said Lee, who locks herself at home every May 13 for fear of breaking down in public if the memories overwhelm her.

The bloodshed of 1969, which took at least 200 lives, erupted when Malaysia was still emerging from the legacy of colonial rule, only a dozen years after attaining independence from Britain.

Racial divisions ran deep. The Malays held political power but were largely poor. The Chinese, many of whose ancestors immigrated in the 18th century, had prospered through trade and tin mining. Indians, mostly labourers, had little say in politics or business.

The riots were sparked by politics. Chinese opposition supporters, whose parties made sweeping election gains, held a victory march in Kuala Lumpur and jeered at residents in Malay neighbourhoods. The Malays staged their own rally, and in ensuing clashes, mobs armed with pistols and knives roamed the streets, killed people of other races and torched their homes.

Seeking to curb economic disparities, the government launched an affirmative action programme in 1971 that enabled Malays to get into universities more easily, buy homes at reduced prices and enter business through rules requiring many companies to be partly Malay-owned.

The main government-funded schools teach in the Malay language, while schools that use Chinese and the Indian language of Tamil get less aid.

Many Malays prospered. Their share of corporate wealth surged from 2.4 percent in 1970 to about 20 percent today, and they make up nearly two-thirds of the population.

Complaints about affirmative action and religious disputes - such as the demolition of Indian Hindu temples on illegal sites by Malay authorities - became more apparent during the tenure of former Prime Minister Abdullah Ahmad Badawi, who governed for five years from October 2003.

He is credited with allowing more space for discussions of long-sensitive issues in the government-controlled media and on independent internet forums.

"There has been a maturing of Malaysian democracy in trying to resolve disputes," said Denison Jayasooria, a researcher at the Institute of Ethnic Studies at the National University of Malaysia. "What people want is more public openness and intellectual discussion on race."

The wider freedoms led to clearer expressions of dissent, such as a street protest in Kuala Lumpur two years ago where tens of thousands of Indians demanded economic fairness. Police quelled the protest with tear gas, and five organizers were jailed under a security act that allows indefinite detention without trial. Two were freed recently.

Minorities also voiced their discontent through the ballot box. In the March 2008 general elections, Chinese and Indians overwhelmingly voted against the long-ruling National Front coalition, which now governs with its lowest parliamentary majority in more than 50 years. Abdullah took the blame for the loss and stepped down, handing power to his deputy Najib Razak.

Many high-profile disputes are religious in nature. Minorities have complained that Islamic courts - not secular courts - are given jurisdiction in family disputes that involve both Muslims and non-Muslims. Some Malay Muslims consider these complaints as a threat to the status of Islam, the country's official religion.

Nonetheless, even some Malays agree that it is time to at least review affirmative action so that it benefits all the poor. Advocates of this include Nazir Razak, the prominent banker brother of new prime minister.

Najib, who took power in early April, says affirmative action is still needed but can be diluted. Last month, he scrapped a requirement for 30 percent Malay ownership in several sectors, such as health and transport, to lure foreign investment to the floundering economy.

He also mounted a massive publicity campaign called "1 Malaysia" to promote racial solidarity and made several surprise appearances at religious festivities of Indians.

"No one should assume that they are second-class citizens in this country," Najib said.

In a bid to display fairness to all religious groups, Najib's Cabinet announced last month it would forbid religious conversion of minors without the consent of both parents. This followed high-profile legal spats in which people who embraced Islam changed their children's religion despite protests from non-Muslim spouses.

Najib's administration has shown "some kind of intention to break with the past," said Ibrahim Suffian, director of the independent Merdeka Centre research firm. "People will be watching to see if it is backed up by effective implementation."

The recent disputes about race have raised concerns about upsetting what has long been a delicate balance. As Ibrahim puts it: "On a people-to-people level, the relationships feel quite positive. There is the sentiment that everyone has a shared fate. Agitating the situation would only ruin it for everyone."

In the capital of Kuala Lumpur, office workers from all races work together relatively amicably. Lunch crowds include Chinese women in skirts and Malay women draped in multicoloured, loose-flowing dresses. Very often, they can be seen tucking into "dosa" rice pancake and curry, an Indian favourite.

Though most people still have friends predominantly of their own race, there is inter-ethnic interaction and respect. For example, many Chinese avoid eating pork in the presence of Malay companions.

"There are still racial and religious differences, but there's no widespread chaotic situation," said Jayasooria, the National University of Malaysia researcher. "It's a live-and-let-live situation, where nobody will be shouting at other races on the street." History textbooks, referring to the May 13 riots, warn that racial harmony must be nurtured. The last deadly clash - between Malays and Indians - was in 2001 when six people were killed.

Lee, the Chinese woman shot in the riots and paralyzed from the waist down, believes that if she can shed the bitterness that once consumed her, others can too.

"I used to hate (the Malays) because of what happened to me," she said in a wheelchair behind the counter of a tiny grocery store that she opened several years ago.

"Time hasn't made me well again. I never got the chance to get married. I'm lonely and I live by myself. So of course I'm sad but I'm not angry with anybody anymore."