NZ pledges up to $200m on climate change 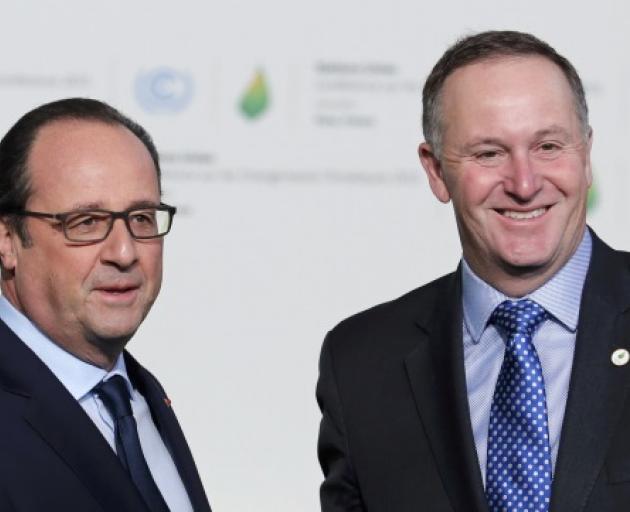 New Zealand will commit up to $200 million to support countries' climate change efforts - and $20 million toward ground-breaking research to slash agricultural greenhouse gases.

Prime Minister John Key announced the new funding at the United Nations Climate Change Conference in Paris (COP21) earlier today, where close to 200 nations are meeting to thrash out a new agreement to tackle global emissions.

Mr Key told delegates that New Zealand would provide up to $200 million for climate-related support over the next four years, the majority of which would benefit Pacific nations.

This would build on the $65 million New Zealand has already spent over the last three years to help Pacific nations secure reliable and clean energy.

"New Zealand has been at the forefront of efforts to shift the Pacific from reliance on fossil fuels to renewable electricity," he said.

"This work to address energy insecurity and build resilience will continue as we step up our support for climate change adaptation."

Further, the country woiuld put $20 million, also over four years, toward the Global Research Alliance on Agricultural Greenhouse Gases, a 46-nation consortium that works to reduce emissions from livestock, cropping and rice production.

It comes on top of New Zealand's initial investment of $45 million to the alliance, which was formed in 2009.

Agriculture accounts for just under half of New Zealand's emissions - mainly methane belched from ruminant stock like sheep and cattle.

Earlier this year, New Zealand scientists with the alliance announced they had identified animal-safe compounds that could slash methane emissions by up to 90%.

Mr Key said such world-leading research had the potential to reduce global emissions, particularly in developing countries that have similar emission profiles to New Zealand.

"In New Zealand half our emissions are from agriculture where there are not yet cost effective ways of reducing emissions, but we are working hard to change that," he said.

"The sooner we have technology available, the sooner farmers can start using it to further reduce emission both in New Zealand and in other countries."

In Paris, Mr Key also presented the UN with a message from close to 40 countries calling for the removal of inefficient fossil fuel subsidies.

The Friends of Fossil Subsidy Reform Communique was endorsed by nations including France, Germany, Italy, the United Kingdom and the United States.

A number of New Zealand businesses and business organisations have also backed the Communique, including Business New Zealand, the New Zealand Shippers Council, the Auckland Chamber of Commerce, Mighty River Power and Fonterra.

Mr Key said phasing out fossil fuel subsidies was "absolutely vital" if the world was to succeed in substantially reducing emissions.

Research had shown that phasing out these subsidies could reduce greenhouse gas emissions by as much as 10 percent, he said.

"Countries subsidised fossil fuels to the tune of US$500 billion in 2014. These subsidies have the perverse effect of encouraging businesses and consumers to burn more fossil fuel and create more emissions."

Mr Key told delegates the Paris negotiations must produce a meaningful agreement, adding that New Zealand sought a deal which put the world on a pathway towards limiting global temperature rise to no more than 2 degrees Celsius.

"Every country needs to contribute towards this goal," he said.

"While New Zealand's emissions are small on a global scale, we are determined to make a strong contribution to the international effort."

"Almost 80 percent of our electricity already comes from renewable energy and around half of our emissions are from agriculture, where there are not yet cost effective technologies to reduce emissions. But we are working hard to change that."

New Zealand has taken to Paris a new target of reducing greenhouse gas emissions to 30 percent below 2005 levels, by 2030, which Mr Key called a "significant increase" on its current target of five percent below 1990 emission levels by 2020.

This target has however been criticised as weak and unambitious by many academics and environmental groups.

The global Climate Action Tracker has classified it as "inadequate".

Green Party COP21 spokesperson Julie Anne Genter noted how Mr Key had spoken of the need for "real outcomes" when it came to climate change.

"If only he would practice what he preaches back home," she said. "Under his watch New Zealand's climate pollution keeps climbing, and until that changes his Government is failing over the biggest issue of our time."

Climate Action Network International meanwhile hit out at New Zealand with its "Fossil of the Day" award.

"Instead of trying to pull the wool over New Zealand's climate inaction, we should future proof New Zealand by eliminating all fossil fuel subsidies and having a plan to achieve a zero carbon economy by 2050," New Zealand Youth Delegation member Zoe Lenzie-Smith said.

COP21, running for two weeks, is the first climate conference that National has taken a cross-party delegation to. The last time this happened was in 2007, when David Parker took Nick Smith to COP13 in Bali.