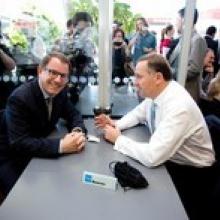 Mr Key has said the content of the tape is "bland'', but yesterday, he decided to lay a formal complaint with the police about the taping of his conversation with Mr Banks by freelance cameraman Bradley Ambrose.

As a result, the police issued a warning to news services that disclosing unlawfully intercepted private communications was an offence punishable by up to two years' jail.

The recording was made of the eight-minute conversation between Mr Key and Mr Banks on Friday.

The pair invited media to witness their cup of tea together in a Newmarket cafe - a signal to National voters to give Mr Banks their Epsom electorate vote.

Ambrose said he put the recording device, which transmits to his camera, on the table to record Mr Banks when reporters were allowed into the cafe.

He then forgot about it when journalists were asked to leave the men alone and he hurried outside to try to get a better camera shot of the pair.

"It just completely left my mind and I was just trying to get the shot like everyone else,'' he told Newstalk ZB.

Ambrose later gave his recording to the Herald on Sunday - a separate publication from the New Zealand Herald - without listening to it.

The paper sought Mr Key's consent to publish it, but it was refused.

He has likened the recording to News of the World tactics and claimed it was made deliberately.

Yesterday, Mr Key said that if there had been something explosive on the tape, "they would have printed it and asked questions later''.

Herald on Sunday editor Bryce Johns has said he was advised he could have published the conversation, but it was an ethical matter.

Labour leader Phil Goff said if the chat was "bland'', Mr Key's complaint to the police was a huge over-reaction.

Last night, TV3 said it had heard a copy of the recording. The network asked Act leader Don Brash if he thought he had Mr Banks' support.

Dr Brash said Mr Banks had assured him there would be nothing on the tape that would embarrass either of them.