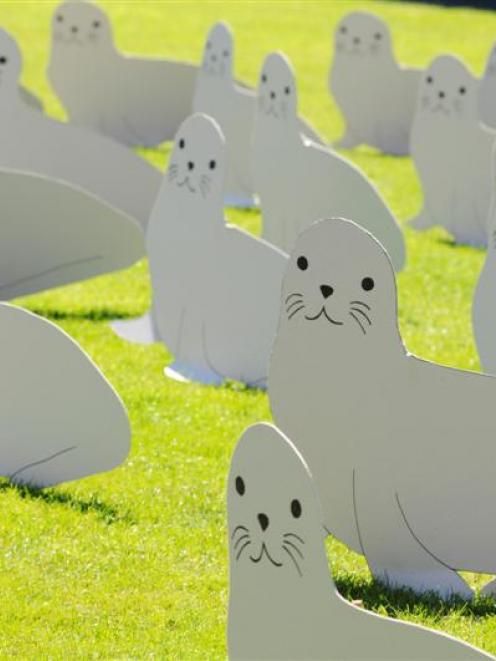 Forrest and Bird raise awareness over the plight of Sea Lions on the steps of Parliament today. Photo by Andrew Labett/NZPA.
Ninety-five New Zealand sea lions basked on Parliament's lawn today as part of a demonstration to highlight that the government was allowing that many of the sea mammals to be killed this year.

Forest and Bird set out the cardboard cut-out sea lions and displayed a real trawl net to draw attention to the number of the endangered mammals allowed to be killed by the southern squid trawl fishery this year. Sea lions die when they become entangled in trawl nets and drown.

Forest and Bird marine advocate Kirstie Knowles said the sea lion population was reducing yearly yet the government permitted the quota allowed to be killed to increase.

The organisation wants incremental decreases in quota down to zero and says money is being put ahead of an endangered mammal's survival. Ms Knowles said there were alternative ways of fishing and places to fish.

"We believe the Minister of Fisheries (Phil Heatley) is definitely putting the industry and economics before the conservation of an endangered species, and one that is only found in New Zealand."

The New Zealand sea lion was one of the world's rarest sea lions. They once lived around New Zealand waters but were now mainly in the Sub Antarctic islands.

The mammals had to survive tough environmental conditions as well as the human threat.

Labour MP Steve Chadwick said increasing the limit was appalling while Green MP Metiria Turei pointed out that for every female adult killed her pup or foetus may also die.

She said it was strange sea lions were a protected species yet they were allowed to be slaughtered.

The Greens have a member's bill yet to be drawn to protect marine mammals. Without such measures such species would die out, Ms Turei said. "We will lose them and we will lose them for ever."

Forest and Bird said Department of Conservation researchers had recorded a 31 percent fall in the number of NZ sea lion pups born this season.