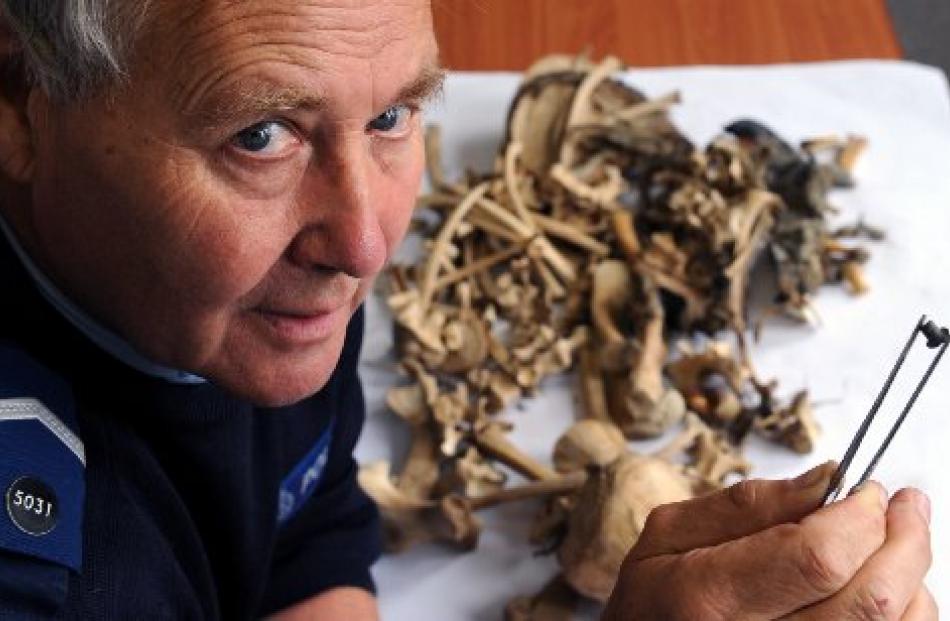 Senior Constable Lox Kellas holds the .22 bullet discovered with the remains of a sea lion found at Victory Beach on Otago Peninsula recently. Photos by Stephen Jaquiery and John Burke. 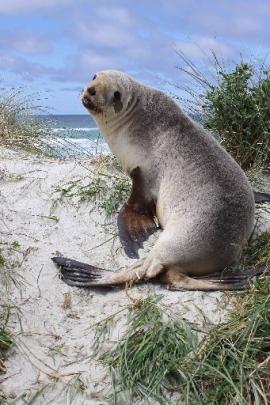 The shooting of a young New Zealand sea lion - a species as threatened as the African elephant or the kakapo - has shocked and dismayed those who work to ensure its survival.

Police are investigating after a bullet was discovered with the decomposed body of a sea lion identified as "BK", one of five tagged on Otago Peninsula last year. The body was found on Victory Beach recently.

As it was not a fatal shot, the sea lion would have suffered before its death.

In early January, a sea lion was seen at Papanui Inlet with a suspected bullet wound but disappeared before Doc could investigate.

Doc sent photographs of the injured sea lion to Massey University for analysis and scientists reported the wound was probably only a couple of days old.

Although Doc appealed for sightings at the time, none were reported.

The decomposed body was discovered last week by Doc marine ranger Jim Fyfe, who was able to identify it as the sea lion with the suspect wound by the tags found with its body.

He returned the next day to sieve through the remains and found a .22 bullet.

"I'm pretty annoyed. A lot of work goes into looking after sea lions - like moving the mother and her pup from Tomahawk Beach."

Its death would have a significant impact on the local population, he said. New Zealand sea lions are listed as a nationally critical threatened species - the same level as the kiwi or kakapo.

"Those who shoot marine mammals may be ignorant of how endangered their target is, but the law is simple - it is an offence to kill or harm any marine mammal."

Under the Marine Mammals Act, penalties of up to six months' jail and fines up to $250,000 can be imposed.

With the death of an Otago female a few weeks ago and a dog attack, the shooting was part of a worrying trend, he said. It appeared sea lions were not safe on Otago beaches.

"We need concerned locals to take ownership of this species and watch out for them - be their guardians. They are simply too spread out for Doc or the trust to keep them safe."

Sea lions had been shot, clubbed and rammed by cars in the past, he said.

"We were starting to hope this sort of behaviour might be in the past," Mr McConkey, who has been studying the local sea lions for the past 17 years, said.

With the main population at the Auckland Islands in rapid decline, it was hoped the sea lions in Otago would increase in number.

"Sadly, it looks like one set of problems has just been replaced by another, but once again people are the cause of it," he said.

Snr Const Kellas said anyone who had information about firearm-related activity in the vicinity of Papanui Inlet in the first week of January should contact police or the Department of Conservation.

New Zealand sea lion
Phocarctos hookeri - formerly known as the Hooker's sea lion.
Status: Nationally critical.
Colour: Mature males brown to black, females lighter, predominantly creamy grey. Pups chocolate brown with paler areas around head.
Size: Adult male 250kg-400kg and 2.4m-3.5m long.
Breeding: Major colony on the Auckland Islands. Since 1993, small numbers have been breeding on Otago Peninsula. Breeding occurs during summer. Females give birth to a single pup every one or two years.
Pups: Dependent on their mothers for milk and protection for the first year of their lives.