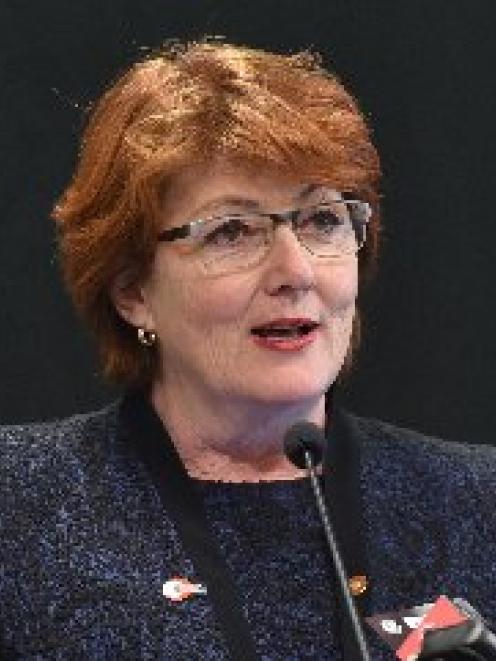 Conservation Minister Maggie Barry gives the opening address at the Conservation Inc 2 Conference in Dunedin yesterday. Photo: Gregor Richardson
Conservation projects will be able to apply for additional Department of Conservation funding following the announcement of a multimillion-dollar cash injection to its Community Fund.

Conservation Minister Maggie Barry made the announcement at the Conservation Inc 2 Conference, the country's largest conservation conference, at the Dunedin Centre yesterday.

She anticipated $4.5million of funding would be allocated throughout the year.

The $26million Doc Community Fund was established in 2014 to assist community-led conservation projects over four years. Ms Barry encouraged representatives from citizen-led conservation groups throughout New Zealand to apply for the funding.

‘‘This fund has made a big difference for many smaller groups who would have struggled to do their great work without some timely help,'' she said.

In 2015, the Central Otago Wilding Conifer Control Strategy was among the Otago initiatives to be awarded funds, receiving $157,500 for wilding control.

Wildings were the largest threat to the environment, she said.

Ms Barry said pest management through the use of 1080 would continue to be a crucial way of protecting native birds, and she appeared pleased when she asked any anti-1080 supporters to raise their hands and nobody did.

Keynote speaker Department of Conservation director-general Lou Sanson said the overhaul of the organisation in 2013 provided much needed clarity to the approach New Zealand took on conservation, which would benefit citizens and visitors.

The use of the environment in branding was contributing to additional interest in conservation.

‘‘These are people that really want to secure that involvement with nature. It is about more than money, it is about engagement in nature,'' he said.

Speakers from the conservation sector will address the themes of seizing the future, succeeding in a changing world, powering up through co-operation and daring and innovation when the conference continues today.