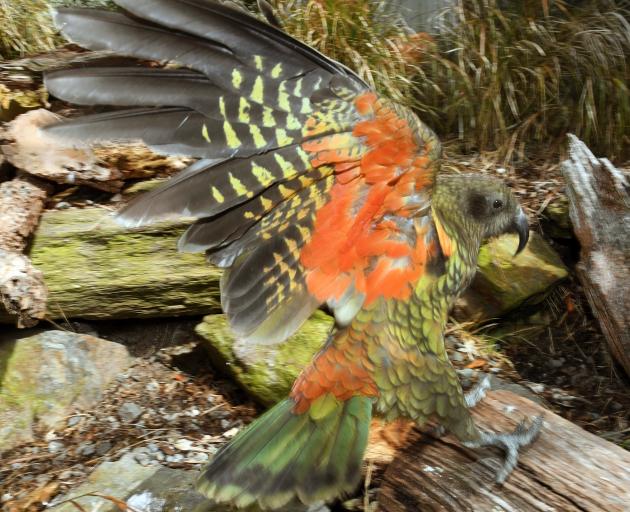 This kea held at the Dunedin Botanic Garden's aviary will not be allowed to breed as the Department of Conservation has said it does not want New Zealand's recently crowned bird of the year bred in captivity. PHOTO: STEPHEN JAQUIERY
Being a protected species, you would think our celebrity bird would be better off bred in captivity.

The kea was named bird of the year on Tuesday, having received 7000 votes from 50,000 people who participated in the poll.

The cheeky mountain parrot has been classified as nationally endangered, with only 3000-7000 of the species remaining.

However, the Department of Conservation has a captive management plan, which does not allow New Zealand's top bird to be bred in captivity, Doc captive kea management technical lead Bruce McKinlay said.

A lack of facilities and the issue of where the birds go after being bred were two of the major reasons why they should not be bred in captivity, Kea Conservation Trust chairman Tamsin Orr-Walker said.

``The issue is there's no breed-to-release programme.''

Kea faced an enormous number of threats and it was unlikely keas would be bred in captivity until those threats were removed, she said.

However, developing a release programme sometime in the future was important, she said.

``We do have the tools available to manage threats to kea in the wild,'' he said.

``We've [The Department of Conservation] said we don't want kea to be bred in captivity.''

There were ongoing threats to wild kea, Mr McKinlay said. That had not changed Doc's stance on the matter.

``Keepers have to be proactive about removing nesting,'' he said.

A kea husbandry manual was compiled by the Kea Conservation Trust in 2010. This was because at that time kea had issues being held in captivity, Ms Orr-Walker said.

``The birds held in captivity have a really important part to play in education,'' she said.