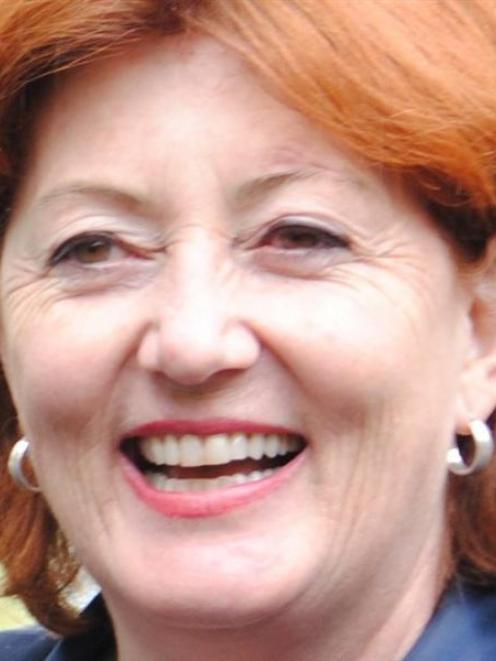 Maggie Barry.
Wicked Campers has been dumped from the Department of Conservation's tourist information listing for those wanting to hire camper vans.

A spokesman for Conservation Minister Maggie Barry said the department "has removed Wicked Campers from the list of camper van companies advertised on this page of its website".

The decision follows an uproar over the slogans on the back of the camper vans and an expressed determination by three government ministers to have the company rejected because of sexual or anti-women overtones in its slogans. The ministers - led by Associate Tourism Minister Paula Bennett - are searching for ways to pressure the company into dropping the slogans.

A major national holiday park company is advising owners throughout its network to make sure all offensive slogans are covered or ban entry to vehicles altogether.

Top 10 Holiday Parks group chief executive David Ovendale today said while the 46 parks across New Zealand were individually owned and operated the company was concerned about the offence the Wicked Campers slogans were causing throughout the community.

"We are, however, across the conversation [about the offence] the Wicked Campers slogans are causing in some quarters and are encouraging our franchisees to respond accordingly, either ensuring the offensive material is covered prior to entry to the park or refusing the offending vehicle entry entirely."

The spokesman for Ms Barry said DoC was also investigating an arrangement in which Wicked Campers was selling cheap access passes to public campgrounds across the country.

The pass gives tourists in Wicked Campers cheap access to DoC campgrounds across the country - just $20 for seven nights in some of New Zealand's most beautiful places.

The Wicked Campers' website says: "Now I don't usually like to blow smoke up the ass of the government, but the New Zealand Government has done us all a solid, by opening access to over 100 unique conservation areas across the country."

The company website says the arrangement helps tourists access "some of the greatest campsites in the world". It also says staying at the campgrounds - which provide toilets - will allow tourists to keep their "environmental footprint limited to just the bullshit that comes out of your mouth when you're off your tits on your 18th round of Sambuca".

The passes appear to be an effort to steer tourists in vans such as Wicked Campers towards campgrounds with facilities because of increasing anger over "freedom campers" using New Zealand's pristine environment as a toilet.

NZ Motor Caravan Association chief executive Bruce Lochore said Wicked Campers likely had its own arrangement with DoC, similar to that which allowed his organisation to sell passes to its members.

"The Government is trying to get non-self contained campers into campgrounds."

He said vans such as those rented by Wicked Campers were little more than a mattress in the back and a gas stove - with no toilet facilities.

He said Wicked Campers was not a member of the association. "Absolutely not. We wouldn't have them. They pretty much give New Zealand the big finger."

Paula Bennett has been leading the charge against Wicked Campers, a company which is currently under fire for using crude slogans on their vans such as "Big legged women ain't got not soul".

"Most of [the slogans] I find offensive as a woman, as a mother and as a grandmother. They are deeply offensive and I don't easily offend," she told the New Zealand Herald earlier.

Today, after sharing a New Zealand Herald story about Wicked Campers on her Facebook page, she received a comment from a man named John Lehmann saying a "bit of sexual violence never hurt anyone Paula. Your should try a bit. Lol."

Ms Bennett replied saying: "John Lehmann seriously!! I'm so tempted to block u but think I might just let your comments speak for themselves. U need help."

His comments have been met with a number of unimpressed Facebook users who support Bennett.

Andrew Hunt wrote: "That's appalling and totally unacceptable. PS - delighted you are having a crack at the camper van slogans - have always been astounded that they can get away with that crap."

"I put it to this guy, if you've got female members in your family and something bad happened to them, would you think that was okay?

"You come and walk in my shoes for one day," she said.

She said it was "very very rare" for Kiwi men think sexual violence was acceptable.

"This guy is one out of the packet," she said.

"If you have something to say, come and say it to our face. That's the challenge I put to him," she said.

Mrs Nicholas described the slogans on the Wicked campers vans as "misogynistic".

"Why haven't they taken the slogans off them?

"We are a country that doesn't want it. They have to be removed," she said.

She commended Ms Bennett for speaking out against the slogans.

"Thank you. It needs to come from the higher end but as a country, we need to get behind her and others in stopping people that say sexual violence is okay. It's not good enough in New Zealand."

A press secretary for Ms Bennett said she would not comment on the matter.

The New Zealand Herald is waiting for comment from Mr Lehmann.