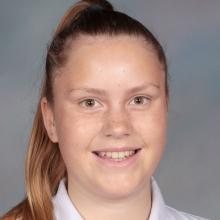 CHARLOTTE ANDERSON, Year 10, St Peter’s College
Growing up on the violent road of poverty, I had thought I had seen it all, but nothing could have prepared me for life as a soldier.

I have watched friends, allies, troops who followed in my footsteps die, all fighting for one thing, peace.

I’m crouching in the dugout; the lingering aroma of teargas blisters my eyes.

My fellow troops huddle together, listening to our corporal shriek over the roar of the battle, yet I try to shut out the world around me.

Clenching my pen and faded parchment, I begin to write.

To my dearest June, I feel as if I must write to you, as it could be the last time I do so.

War is a harsh beast. Even the bravest soldiers cower in this fury.

He's sending us into No Man's Land, the endless field that lies between me and my enemies, the blood-stained graveyard of the unburied.

On this particular day, daunting dark clouds have rolled over the sky casting ghastly shadows over the disrupted land.

Gunfire rattles the enclosed walls of the dugout making my heart beat out of my chest and blood course through my veins.

I can't begin to tell you how filthy the trench is. Empty bully beef cans attract disease-ridden rats.

My uniform is smeared with thick bog and the poppy-red blood of a fallen soldier.

A badge hangs loosely from each soldier's chest including mine, marking us as a fighter, a protector, a defender.

I'm awoken most nights by deathly cries for help.

A cold sweat flows like a river down my face as a wave of memories surges through my mind with the force of an ocean engulfing me in grief.

Honestly, I'm terrified. Terrified of not returning to you.

I put on a brave face, stand confidently. But deep down, I'm scared.

I'm just a boy. A boy who would give anything to be home.

My love for you is undying and you are the only thing that has given me the courage to keep fighting.

"It’s time," Corporal bellows as another explosion plunges down, making the earth tremble.

Gripping my rifle, I trudge out of the dugout, slipping my note into the letter box.

My eyes water as emotions rush through my mind.

I take my first few steps on to the uneven soil. Smoke withers in the distance.

A piercing pain strikes my chest. I stumble. I fall. The blare of battle fades into thin air. The world goes black.