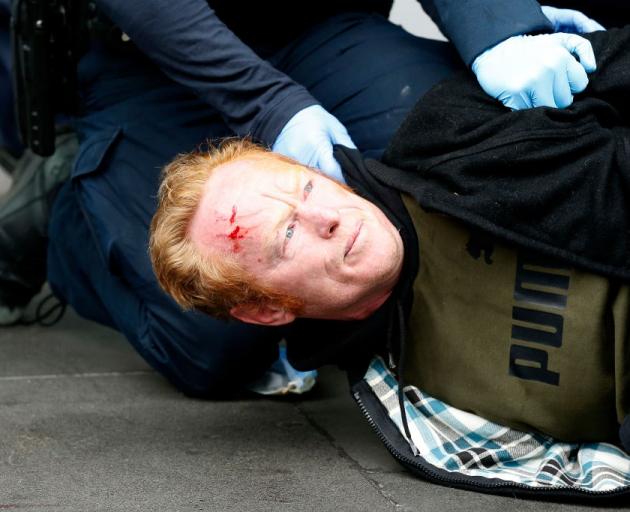 Victoria Police arrest a man is arrested in Elizabeth St as protests continued in Melbourne today. Photo: Getty Images
Victoria has reported a jump in new Covid-19 infections as Melbourne braced for a third straight day of protests against lockdown restrictions, with police deploying in strength to disperse crowds.

Protesters began gathering in the city centre in separate groups on Wednesday as the state's Police Chief Commissioner Shane Patton vowed to prevent more violent protests but declined to discuss the measures planned to control violence or unruly behaviour.

"I'm not going to talk about the tactics we'll deploy today," Patton said at a media briefing in Melbourne, the state capital.

"I want them to be completely unaware of what we're going to do and what capacity they may face."

Television footage showed crowds of protesters walking in the middle of streets in different parts of the city, with police sometimes giving chase.

"There has been a couple of arrests so far," Deputy Commissioner Rick Nugent told radio station 3AW. 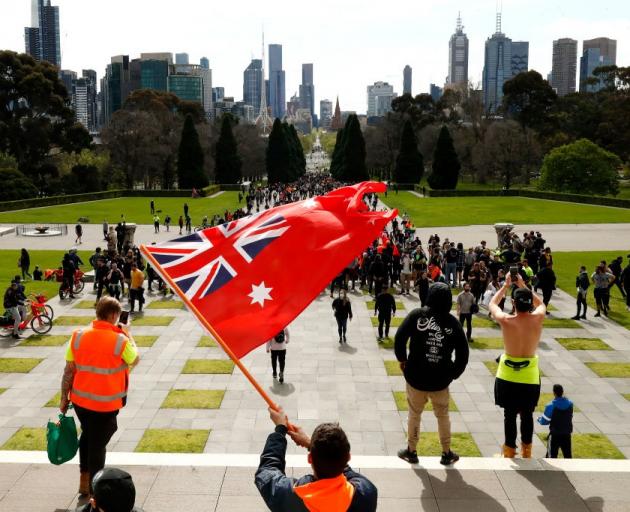 Protesters gather at the Shrine of Remembrance in Melbourne on Wednesday. Photo: Getty Images
More than 2000 people protested in locked-down Melbourne on Tuesday, damaging property, blocking a busy freeway and injuring three police officers after authorities shut construction sites for two weeks. More than 60 were arrested.

Sydney and Melbourne, Australia's largest cities, as well as the capital Canberra have been in lockdown for weeks to contain a Delta outbreak. Melbourne is in its sixth lockdown, the most of any Australian city since the pandemic began.

Authorities are aiming for a staggered reopening in Sydney and Melbourne, easing some curbs when the adult population reaches 70% fully vaccinated, expected next month. More restrictions will be relaxed when the figure hits 80%.

The rates of people age 16 and older who are fully vaccinated were 54% in New South Wales and 45% in Victoria.

Even as officials pledged more relaxation of restrictions within weeks, the traditional New Year's Eve firework display in Sydney at 9pm was cancelled for a second year in a row. But the midnight fireworks will likely go ahead.

A City of Sydney spokesperson said they want to limit the "mixing of crowds" between the two separate events.

A total of 1035 new infections were recorded in New South Wales, home to Sydney, up from 1022 on Tuesday.

Australia's Covid-19 numbers stand at around 90,300 infections, including 1186 deaths. Eight new deaths were reported in the country.