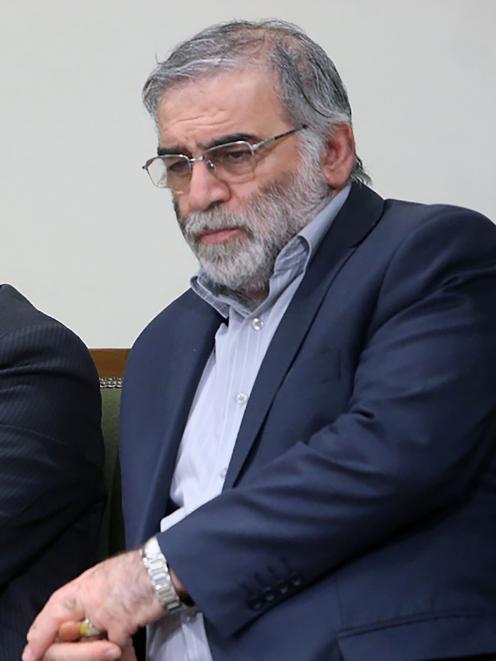 Prominent Iranian scientist Mohsen Fakhrizadeh. Photo: Official Khamenei Website/WANA (West Asia News Agency)/Handout via Reuters
An Iranian scientist long suspected by the West of masterminding a secret nuclear bomb programme was killed in an ambush near Tehran on Friday that could provoke confrontation between Iran and its foes in the last weeks of Donald Trump's presidency.

The death of Mohsen Fakhrizadeh, who Iranian media said died in hospital after armed assassins gunned him down in his car, will also complicate any effort by US President-elect Joe Biden to revive the detente of Barack Obama's presidency.

Iran pointed the finger at Israel, while implying the killing had the blessing of the departing Trump. Foreign Minister Javad Zarif wrote on Twitter of "serious indications of (an) Israeli role".

The military adviser to Supreme Leader Ayatollah Ali Khamenei vowed to "strike as thunder at the killers of this oppressed martyr". "In the last days of the political life of their ... ally (Trump), the Zionists seek to intensify pressure on Iran and create a full-blown war," Hossein Dehghan tweeted.

Fakhrizadeh has been described by Western and Israeli intelligence services for years as the mysterious leader of a covert atomic bomb programme halted in 2003, which Israel and the United States accuse Tehran of trying to restore. Iran has long denied seeking to weaponise nuclear energy.

"Unfortunately, the medical team did not succeed in reviving (Fakhrizadeh), and a few minutes ago, this manager and scientist achieved the high status of martyrdom after years of effort and struggle," Iran's armed forces said in a statement.

The semi-official news agency Tasnim said "terrorists blew up another car" before firing on a vehicle carrying Fakhrizadeh and his bodyguards in an ambush outside the capital.

In the aftermath, there was a heavy presence of security forces stopping cars in Tehran in an apparent search for the killers, witnesses said.

Trump, who lost his re-election bid to Biden on Nov. 3 and leaves office on Jan. 20, pulled the United States from a deal reached under Obama, his predecessor, that lifted sanctions on Iran in return for curbs on its nuclear programme.

Biden has said he will aim to restore that agreement, although many analysts say this will be a challenging goal.

Robert Malley, who served as Iran adviser to Obama and has informally advised Biden's team, said Fakhrizadeh's killing was among a series of moves that have occurred during Trump's final weeks that appear aimed at making it harder for Biden to re-engage with Iran.

"One purpose is simply to inflict as much damage to Iran economically and to its nuclear program while they can, and the other could be to complicate President Biden's ability to resume diplomacy and resume the nuclear deal," said Malley, adding that he would not speculate on who was behind Friday's killing.

A US official confirmed this month that Trump asked military aides for a plan for a possible strike on Iran. Trump decided against it to avoid a wider Middle East conflict.

Last January, Trump ordered a US drone strike in Baghdad that killed Qassem Soleimani, Iran's most powerful military commander. Iran retaliated by firing missiles at a US base in Iraq, the closest the two foes have come to war in decades.

US Senator Chris Murphy, the top Democrat on the US Senate's Middle East subcommittee, said on Twitter that "this assassination does not make America, Israel or the world safer."

Fakhrizadeh had no public profile, but was thought to have headed what the U.N. nuclear watchdog and US intelligence services believe was a coordinated nuclear weapons programme in Iran, shelved in 2003.

He was the only Iranian scientist named in the International Atomic Energy Agency's 2015 "final assessment" of open questions about Iran's nuclear programme. The IAEA's report said he oversaw activities "in support of a possible military dimension to (Iran's) nuclear programme".

He was a central figure in a presentation by Israeli Prime Minister Benjamin Netanyahu in 2018 accusing Iran of continuing to seek nuclear weapons.

"Remember that name, Fakhrizadeh," Netanyahu said at the time, displaying a rare photo of him on a slide.

Michael Mulroy, a senior Pentagon official earlier during Trump's administration, said Fakhrizadeh's killing would set back Iran's nuclear programme and that alert levels should be raised immediately in countries where Iran could retaliate.

Sheikh Naim Qassem, deputy leader of Lebanon's Iran-backed Hezbollah movement, blamed the "heinous attack" on "those sponsored by America and Israel" and said the response was in Iran's hands.

During the final months of Trump's presidency, Israel has been making peace with Gulf Arab states that share its hostility towards Iran.

Earlier this week, Netanyahu travelled to Saudi Arabia and met its crown prince, an Israeli official said, in what would be the first publicly confirmed visit by an Israeli leader. Israeli media said they were joined by US Secretary of State Mike Pompeo.