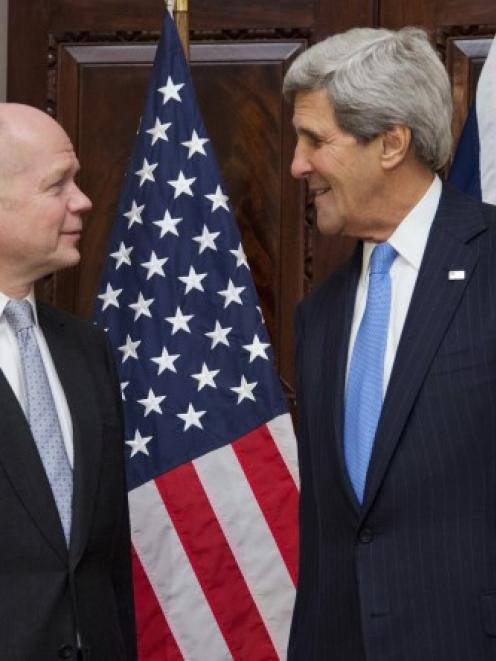 US Secretary of State John Kerry (R) talks with British Foreign Secretary William Hague at Winfield House, the residence of the US Ambassador to Britain, in London. REUTERS/Carolyn Kaster/Pool
The Obama administration insisted on strong safeguards in a nuclear deal with Iran and has no illusions about the risks that the Islamic state might not follow through on its obligations, US Secretary of State John Kerry says.

Kerry sought to reassure skeptics in the US Congress who worry that the six-month agreement gives Iran too much leeway and that it might end up using it as a stalling tactic.

Kerry told CNN that US officials entered into the deal with their eyes "absolutely wide open."

"We have no illusions. We don't do this on the basis of somebody's statements to you. We do it on the basis on actions that can be verified," he said.

The deal reached by Iran and six world powers, including the United States, gives Iran some initial relief from sanctions in exchange for halting its most sensitive nuclear work, the high-grade enrichment of uranium.

The deal does not require Iran to stop all enrichment but does demand a halt to refinement above a purity of 5 percent. Refined uranium also provides the fissile core of an atomic bomb if refined to a high degree.

Influential US Senator Bob Corker, speaking on "Fox News Sunday," pledged to hold the Obama administration's "feet to the fire" to ensure that Tehran is not given excessive leeway.

Corker, the senior Republican on the Senate Foreign Relations Committee, said that the pact allowing Iran to continue to enrich uranium must not "become the norm" for a longer-term agreement.

"I think you are going to see on Capitol Hill, again, a bipartisan effort to try to make sure that this is not a final agreement," he said.

Senator Ben Cardin, a Democrat from Maryland, agreed: "We will not stand by (and) just let this be the final deal." Cardin also appeared on Fox.

Speaking on the ABC program "This Week," Republican Saxby Chambliss, vice chairman of the Senate Select Committee on Intelligence, said Congress may allow the administration to see how the deal works over the next six months.

But he added that in the future, there could be "a strong movement in the United States Senate to move ahead to tighten sanctions" on Iran.

On CNN's "State of the Union," Kerry also sought to provide reassurances to Israel, which views the nuclear deal as misguided.

"Israel is threatened by what has been going on in Iran," Kerry told CNN.

"But I believe that from this day - for the next six months - Israel is in fact safer than it was yesterday because we now have a mechanism by which we are going to expand the amount of time in which they (the Iranians) can break out (toward making a nuclear bomb). We are going to have insights to their program that we didn't have before," he added.