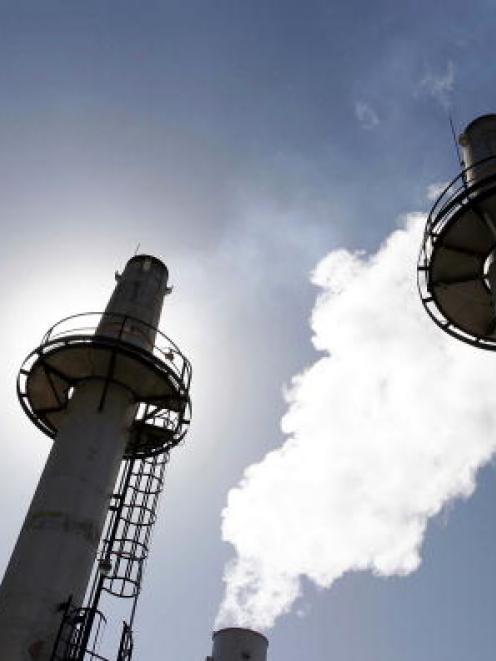 The heavy water production facility at Arak, south of the Iranian capital Tehran. Photo Getty Images
Iran is pressing ahead with the construction of a research reactor that Western experts say could offer it a second way of producing material for a nuclear bomb if it decides to make one, a UN report shows.

Iran has transported the reactor vessel - which would hold the fuel - to the heavy water plant near the central town of Arak but has not yet installed it, the International Atomic Energy Agency (IAEA) said in a report issued to member states.

"It certainly means that progress is made," one diplomat familiar with the Iranian nuclear programme said, adding that several other major components for the reactor, including control room equipment, had yet to be put in place there.

The United States said Iran was in "non-compliance with its international nuclear obligations".

"This report marks an unfortunate milestone with regard to Iran's illicit nuclear activities," State Department spokesman Patrick Ventrell said. Iran he said was "advancing its enrichment programme in blatant violation of its international obligations."

Western concerns about Iran are focused largely on uranium enrichment plants at Natanz and Fordow, as such material refined to a high level can provide the fissile core of a nuclear bomb. Iran says it only refines uranium to fuel nuclear energy plants.

But experts say Arak may also be a proliferation issue as it could yield plutonium for nuclear arms if the spent fuel were reprocessed. Iran has said it has no reprocessing activities.

"Once the reactor operates, it could spawn more than enough weapons-grade plutonium for a bomb per year, should Iran ever decide to do that," said nuclear expert Mark Hibbs of the Carnegie Endowment think-tank.

The Islamic Republic, which denies it has any intention of acquiring nuclear arms, plans to commission the plant in the first quarter of 2014 and expects it to become operational in the same year's third quarter, the IAEA said.

Israel, which has threatened to attack Iranian nuclear sites if diplomacy and sanctions fail to stop Tehran's nuclear drive, bombed Iraq's atomic reactor in 1981 and a suspected Syrian nuclear facility in 2007.

"Israel might be tempted to try to repeat what it did previously in Syria and Iraq and destroy the reactor before it goes critical," Hibbs said.

In its previous report on Iran, in February, the U.N. agency said Iran had almost completed installation of cooling and moderator circuit piping in the Arak facility. Wednesday's report said Iran planned to produce 55 fuel assemblies for the reactor by August this year.

Tehran last year postponed the planned start-up from the third quarter of 2013, a target that Western experts said always had seemed unrealistic.

As reported by Reuters on Tuesday, the IAEA report showed Iran increasing its capacity to refine uranium by installing hundreds more centrifuges at Natanz since February, underlining Tehran's defiance of Western demands to curb the activity.

They included complete or partial installation of more than 500 advanced centrifuges which, once operational, would enable Iran to speed up significantly the accumulation of material the West fears could be put to developing nuclear bombs.

But, in a development that could help buy time for diplomacy between Iran and world powers, the report showed limited growth of Iran's most sensitive nuclear stockpile, medium-enriched uranium, and it remained below an Israeli "red line".

Tehran's holding of uranium gas refined to a fissile concentration of 20 percent - a relatively short technical step from weapons-grade - is closely watched as Israel says it must not amass enough for one bomb if further processed.

Critics say Iran is trying to achieve the capability to make atomic arms. Iran denies this, saying it needs nuclear technology for energy generation and medical purposes and that it is Israel's reputed nuclear arsenal that threatens peace in the Middle East.

The IAEA report said Iran had continued to carry out "activities" - code for suspected clean-up work of any traces of illicit nuclear-linked work - at the Parchin military site, including asphalting an area U.N. inspectors want to see.

Separately, Iran told the U.N. agency during an inspection this month of the Bushehr nuclear power plant - the country's only such installation so far - that it was shut down. No reason was given, but it has previously suffered delays in its operations.