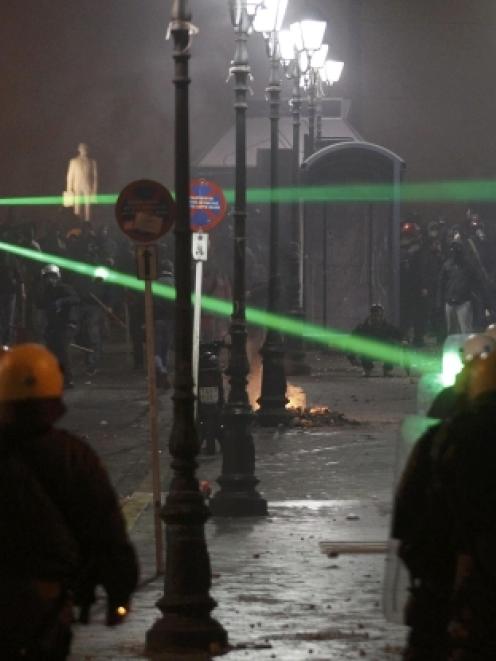 Green laser pointers are aimed at riot police by demonstrators during violent protests in central Athens. REUTERS/Yiorgos Karahalis
Historic cinemas, cafes and shops went up in flames in central Athens as black-masked protesters fought Greek police outside parliament, while inside lawmakers looked set to defy the public rage by endorsing a new EU/IMF austerity deal.

As parliament prepared to vote on a new 130 billion euro bailout to save Greece from a messy bankruptcy, a Reuters photographer saw the buildings engulfed in flames and huge plumes of smoke rose in the night sky.

The air over Syntagma Square outside parliament was thick with tear gas as riot police fought running battles with youths who smashed marble balustrades and hurled stones and petrol bombs.

Government officials warned that Greeks faced "unimaginably harsher" sacrifices if parliament rejected the package, which demands deep pay, pension and job cuts, when it votes later in the evening.

But on the streets many businesses were ablaze, including the neo-classical home to the Attikon cinema dating from 1870 and a building housing the Asty, an underground cinema used by the Gestapo during World War Two as a torture chamber.

As fighting raged for hours, protesters threw home made bombs made from gas canisters as riot police advanced across the square on the crowds, firing tear gas and stun grenades. Loud booms from the protests could be heard inside parliament.

After days of dire warnings and threats of rebellion, parliament began debating a bill setting out 3.3 billion euros in wage, pension and job cuts this year alone, to secure funds Greece needs to avoid bankruptcy next month.

Finance Minister Evangelos Venizelos told parliament that the alternative to the international bailout - bankruptcy and a departure from the euro zone - would be far worse for Greeks.

One small party has already pulled out of the coalition of Prime Minister Lucas Papademos in protest against the terms of the rescue package from the European Union and International Monetary Fund - Greece's second since 2010.

A number of lawmakers from the two biggest government parties, socialist PASOK and conservative New Democracy, have also threatened to rebel but their numbers did not appear to be enough to sink the bill.

Greece needs the international funds before March 20 to meet debt repayments of 14.5 billion euros, or suffer a chaotic default which could shake the entire euro zone.

But many Greeks believe their living standards are collapsing already and the new measures, which include a 22 percent cut in the minimum wage, will deepen their torment.

"Enough is enough!" said 89-year-old Manolis Glezos, one of Greece's most famous leftists. "They have no idea what an uprising by the Greek people means. And the Greek people, regardless of ideology, have risen."

Glezos is a national hero for sneaking up the Acropolis at night in 1941 and tearing down a Nazi flag from under the noses of the German occupiers, raising the morale of Athens residents.

"These measures of annihilation will not pass," Glezos said on Syntagma Square, visibly overcome by teargas and holding a mask over his mouth.

As is usual in Greek protests, only a small fraction of the crowd fought the police but one group started a fire right in front of a tent where first aid workers were preparing to care for the injured. "Cops, pigs, murderers!" chanted the crowd.

Police said 14 injured protesters were taken to hospital - including one who was hit in the stomach by a flare - and at least 50 were treated at the scene for breathing problems caused by the tear gas. At least eight police were also injured.

Inside parliament, Venizelos said: "Anyone who wants to remain in the euro zone must abide by some rules.

"The law must be passed by midnight because come Monday morning, the banking and financial markets must have got the message that Greece can and wants to survive."

According to lawmakers from both the Socialist and the conservative party, some deputies who had threatened over the past two days to reject the law have changed their stance.

"The number of dissenters looks shrinking rather than growing," one deputy told Reuters. Another said: "The situation is too delicate - nobody can really be sure until the beans are counted."

A deputy minister who declined to be named said he expected more than 200 lawmakers in the 300-seat parliament to approve the law.

The bill has riven the ruling coalition and deepened a social crisis among Greeks already hit by cuts and tax hikes to ease the country's huge debt burden.

During the debate a Communist Party deputy hurled the pages of the bill on the floor of the chamber and in fiery exchanges Venizelos warned lawmakers: "If the law is not passed, the country will go bankrupt."