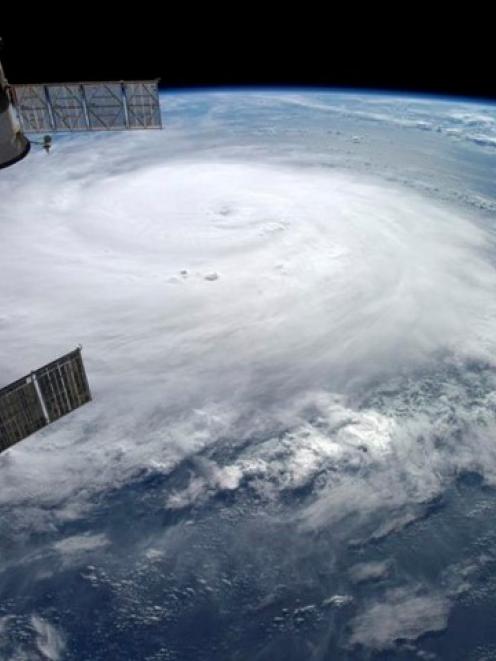 Hurricane Gonzalo is seen over the Atlantic Ocean in this NASA image taken by astronaut Alexander Gerst from the International Space Station on Friday. REUTERS/NASA/Alexander Gerst
Bermuda suffered extensive power outages after Hurricane Gonzalo pummeled the tiny island chain with rain and howling winds, but the tourist destination dodged catastrophic damage and death despite the direct hit.

Most of the Atlantic archipelago, an affluent insurance industry hub about 1030km off the coast of North Carolina, was without electricity Saturday morning and many roads were impassable due to downed trees and debris.

The strongest storm to sweep the subtropical British territory in a decade whipped Bermuda with maximum sustained winds of around 110 miles per hour (175 kph) as it made landfall Friday night, forecasters said, with hurricane-force winds extending up to 60 miles (95 km) from its center.

Premier Michael Dunkley said in a statement that island residents awoke to damaged property, blocked roads and no electricity, "all things that can be replaced and restored".

"I think all of Bermuda would agree that we took a licking. We are a bit bruised," Dunkley said in a radio broadcast, according to the local Royal Gazette. But, he added, "all in all we came out of this storm much better than we expected."

By mid Saturday, weather on the island had improved with Gonzalo about 355 miles (575 km) north-northeast of Bermuda, with sustained winds of 90 mph (150 kph), the U.S. National Hurricane Center in Miami said.

Bermuda Electric Light Co. had restored power to thousands of customers, though about 25,000 out of 36,000 metered connections remained without electricity, the company said.

Instruments at the Bermuda Radio Maritime Operations Center in St. Georges and at the Bermuda International Airport were knocked offline by Gonzalo and medical facilities had also been damaged, the hurricane center reported.

"The center of the eye went right over them," said Chris Landsea, a meteorologist at the National Hurricane Center. "It was a direct hit."

Gonzalo peaked on Thursday as a Category 4 hurricane, the first in the Atlantic since 2011, before weakening. It was expected to continue weakening into the weekend as it moved with increased speed northward over cooler waters.

Gonzalo is expected to pass near the coast of Newfoundland on Saturday night and early Sunday, hurricane center forecasters said, adding that Canadian officials had issued a tropical storm watch from Arnold's Cove to Chapel's Cove.

Jeff Masters, a hurricane expert with private forecaster Weather Underground, said Bermuda was among the best equipped places in the Atlantic for weathering such storms, in part because of strict building codes.

Hurricane Fabian, which pummeled the island in 2003 and caused $300 million in damage, was a Category 3 storm, he said.

Earlier, Gonzalo wrought destruction in the Caribbean, tearing off roofs in Antigua, and killing an elderly sailor and damaging some three dozen vessels in St. Maarten.