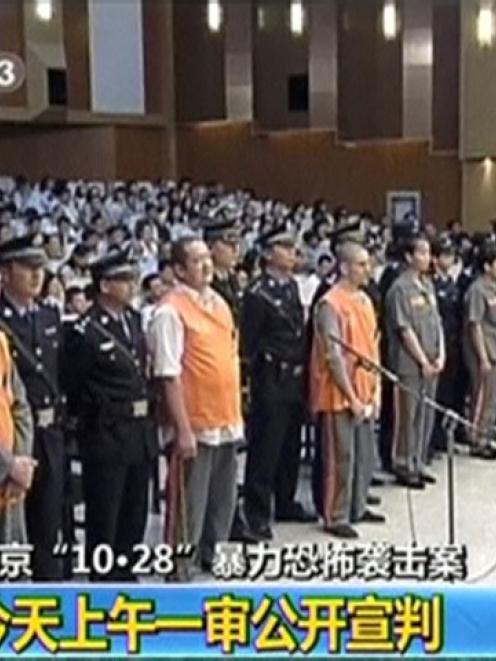 The trial of three people sentenced to death for their roles in an October attack on the edge of Tiananmen Square is seen in this still image taken from video in Urumqi city. REUTERS/CCTV/via Reuters TV
China today sentenced three people to death over a deadly attack at Beijing's Tiananmen Square last October, state television reported, an incident blamed by the government on Islamist militants.

One attacker was given a life sentence, and four others received jail terms ranging from five to 20 years.

Five people were killed and 40 hurt when a car ploughed into a crowd at the northern edge of Tiananmen Square and burst into flames. Those killed included two bystanders and three people in the car.

Footage of the trial on state broadcaster China Central Television (CCTV) showed suspects in orange vests at a Xinjiang courthouse.

The court in Urumqi, the capital of the western region of Xinjiang, sentenced Husanjan Wuxur, Yusup Umarniyaz and Yusup Ahmat to death for organising and leading a terrorist group and using dangerous methods to endanger public security, state media reported.

Two others, who received sentences of life and 20 years in prison respectively, were charged with joining a terrorist group and using dangerous methods to endanger public security. Three more were sentenced to jail terms ranging from five to 10 years for the former charge.

The suspects formed a "terrorist group" in 2011 and plotted violent acts, CCTV reported. Between December 2012 and the following September, they acquired firearms and explosives and plotted to travel to Beijing to set off a deadly explosion.

Last October, members of the group traveled to Beijing and raised money from supporters to buy the car that would be driven to Tiananmen Square, CCTV said.

About 400 people attended the public trial, according to the news report, and footage appeared to show Uighur women in tears as they watched the proceedings.

All of those sentenced appeared to have ethnic Uighur names. Xinjiang is the traditional home of the mostly Muslim Uighurs, and China has blamed previous attacks on separatists who seek to establish an independent state there called East Turkestan.

China has been on edge since a suicide bombing last month killed 39 people at a market in Urumqi. In March, 29 people were stabbed to death at a train station in the southwestern city of Kunming.

Police in Xinjiang have arrested or tried dozens of suspects in recent weeks for spreading extremist propaganda, possessing banned weapons and other crimes.

Knife-wielding attackers in western China wounded four people in a crowded chess hall in the city of Hotan on Sunday, CCTV said in a separate report on Monday. Two of the attackers were killed and a third was arrested.

The motive for Sunday's attack was not immediately clear.

Rights activists and exile groups have charged that the government's own repressive policies in Xinjiang have sowed the seeds of unrest, a claim Beijing denies.