How can an airliner vanish? Simple . . . 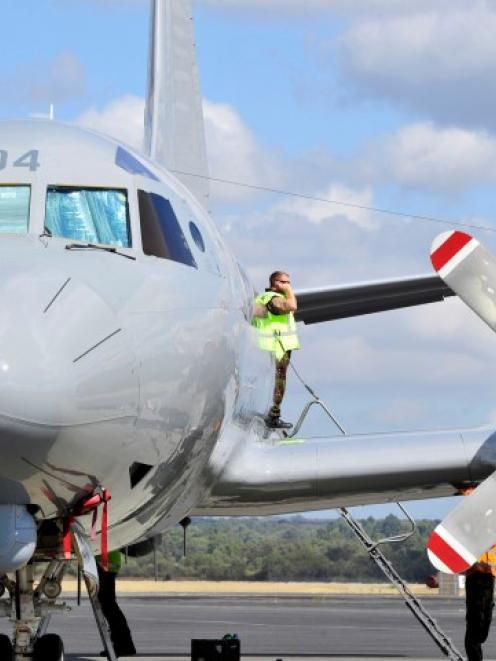 A Royal New Zealand Air Force Orion aircraft prepares to take off from Royal Australian Air Force Base Pearce near Perth to search for the missing airliner. REUTERS/Richard Polden
If you want to participate in the search for Flight 370, try this.

Bring up Google Earth on your computer and rotate the introductory globe until you are looking down at the North Atlantic. A line from New York to London should lie more or less across the middle of the Earth's disk. Zoom in until the "eye alt" - displayed in the lower right-hand corner - is about 260 miles. You are looking at roughly the size of the search area for Malaysia Airlines Flight 370.

Now, it so happens that the North Atlantic route is one of the busiest air traffic corridors in the world, and airliners are strung out along it like beads, often just a few miles apart. There are dozens of them in the area you have picked, plainly visible silver birds against the dark ocean.

Try to find one.

You won't. The ocean is vaster than you imagine and the airplanes more minute. Far from a needle, an airliner is more like a single speck of dust in a haystack. Electronic communications have accustomed us to the idea that tiny things like cellphones are easily located in large areas, like the United States. But when the cellphone's battery dies, you can barely find it in your bedroom.

Soon Flight 370's "black boxes" will emit their last ping, and the wreckage - it's pretty certain at this point that we're talking about wreckage, not an intact 777 camouflaged with tarps or palm fronds somewhere in Kazakhstan or the Maldives - will lie enveloped in its shroud of darkness and silence. Perhaps bits of floating debris will wash ashore in future months or years - some things float forever - and they may or may not be noticed or identified as belonging to the vanished airliner.

But even if an identifiable bit of the wreckage was found today, it would not reduce the size of the search area - speculative to begin with - in any useful way. And if by a miracle the black boxes are recovered, the more interesting one - the cockpit voice recorder - won't tell us what was happening in the cockpit at the time the plane changed course because its memory holds only the preceding two hours of sound.

Despite the widespread feeling that it is incredible - "in this day and age!" - that something like an airliner full of people could go missing, it is in fact perfectly credible once you accept that some highly unusual events were required to bring it about. No matter which system you use for tracking the position of airliners - or your teenage children - there will always be some way that it can be defeated, deliberately or by accident.

The search will go on pro forma, though it was extremely unlikely at the outset that the airplane could be found, and the passage of time has pushed unlikelihood closer and closer to impossibility. Air France Flight 447, which crashed in the mid-Atlantic in 2009 and was located two years later, seems to provide a precedent for near-miraculous recoveries. But that situation was quite different: Debris was found immediately, and the search area was tiny. Difficult as the search was, it was easy compared with that for Flight 370. This time, hope persists because only at the gates of hell is it ever wholly abandoned.

How are you doing on Google Earth? Nothing yet? I'll take a needle in a haystack any day.

- Peter Garrison writes a monthly accident-analysis column for Flying magazine. He wrote this for the Los Angeles Times.