Incredible tale of survival at sea 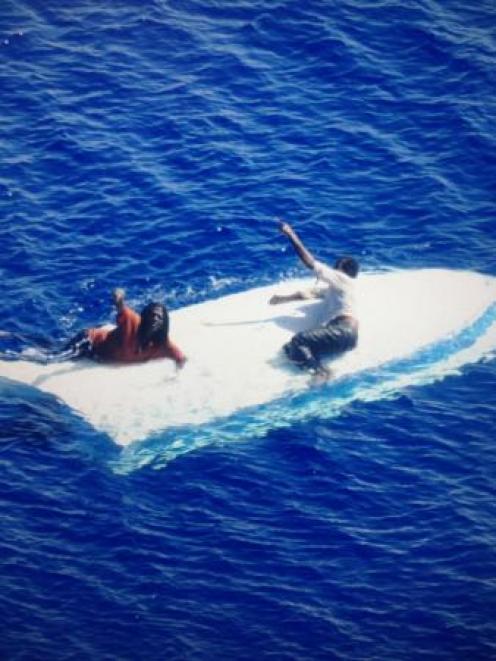 Mike Russell and Anthony Douglas cling to the hull of their capsized vessel as a Coast Guard MH-65 rescue helicopter crew make their approach. Photo U.S. Coast Guard
Eight days after their boat tossed them into the sea, Mike Russell lost all hope.

Anthony Douglas already had to save his friend several times. Clinging to the slippery fibreglass hull drained their strength. Neither man had slept. They had no water, just seaweed to suck on.

Russell told Douglas it was over.

"We're going to get out of here together," he replied.

Hours later, on September 14, a tow boat spotted them and a Coast Guard helicopter circled above. The next day, a photo taken from the chopper spread across the web: two 50-something Bahamian men, desperate, soaked and isolated on a vast, blue expanse.

Details of their ordeal first appeared in The Bahamas Tribune, but until now a full account has not reached the US. Speaking from Abaco Island, where he is recovering at his home, Douglas described what happened when he and a friend simply wanted to go fishing one morning.

In Freeport on September 7, they packed some fishing gear into a 16-foot white boat. It was a two-hour crossing to Bimini, which Douglas had done several times, in boats even smaller than this one.

Douglas, 57, says he has fished since he was 10 and makes his living that way now. Russell, 58, who declined to comment when reached by phone, is a Freeport businessman. The two met recently through a mutual friend.

They set out that day to catch grouper.

A storm caught them first. Drenching rain rendered their little pump useless. Douglas said there was nothing they could do.

Then "the wave came," he said.

It pitched their little boat upside down, and the two fought churning seas to stay on it. When the storm passed, they were adrift and tired. The current had carried them "like we had a motor," Douglas said, and they were far off course.

That night, they did not sleep. To sleep was to slip off the hull. So they watched the moon and the lights of Bimini shrink in the distance.

Back in Freeport, the brother of Douglas' girlfriend was waiting for a call from his friend to let him know they made it. When he never got the call, he phoned the family in Abaco and the police. Search crews mobilized.

"We were looking out for them," said Michael Checkley, inspector for the Bimini Police. "But of course they didn't come."

The U.S. Coast Guard publishes a manual on how to survive in "the most inhospitable place on our planet" - open water. Chapter one is called "The Will to Survive."

"The most predominant psychological barrier to survival," according to the Coast Guard, "is fear: fear of the unknown, fear of discomfort and fear of one's own weakness."

Douglas says he has always been fit. He grew up playing sports, and he is dive certified. He set his mind to being seen. The days brought harsh sunlight but raised the likelihood that they would be spotted.

Douglas could hear the revving engines of distant freighters.

Occasionally one would pass within a mile or so of them, and Douglas would scramble to his feet as best he could. It was nearly impossible to keep his balance standing on the hull. And he was so small.

At night, they took turns sleeping - for a minute or two - while holding the other in place.

On the fifth day, the water turned to land. A house materialized around them. Douglas was alone and safe. Such hallucinations continued as the men grew weaker. They sucked on seaweed for sustenance. It offered precious doses of potassium, calcium and iron.

But they were severely dehydrated. Their skin was thick and inelastic, like putty, as their blood worked to keep their vital organs alive. Their eyes were sunken.

As their desperation grew, Russell slipped off the boat and told Douglas to let him sink. Douglas dragged him back and used his shirt to tie them together.

"Mike," Douglas said, "Are you praying?"

He knew that if they reached the powerful Gulf Stream, it would drag them north to death. Douglas prayed: "God, if you could save me now, this is the time to save me."

Near Riviera Beach, Florida, they were saved. The crew of a tow boat came close enough to see them and rushed to bring them water.

A helicopter whisked them off the sea to Delray Beach Medical Center, where they remained for another three days.

The sun and salt water left their skin damaged, and their hands are raw from gripping fibreglass. On Sunday, Russell went to the hospital for back pain where a layer of skin had ripped off. He is hoping his story becomes a movie.

Douglas is resting a lot now. He said he has no immediate plans to go fishing again.